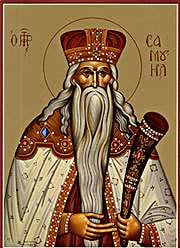 This most holy man, a Prophet of God from childhood, was the last judge of the Israelite people, and anointed the first two Kings of Israel. He was born in the twelfth century before Christ, in the city of Armathaim Sipha, from the tribe of Levi, the son of Elkanah and Hannah (Anna). He was the fruit of prayer, for his mother, being barren, conceived him only after she had supplicated the Lord with many tears; wherefore she called him Samuel, that is, "heard by God." As soon as Hannah had weaned him, she brought him to the city of Silom (Shiloh), where the Ark was kept, and she consecrated him, though yet a babe, to the service of God, giving thanks to Him with the hymn found in the Third Ode of the Psalter: "My heart hath been established in the Lord . . ." Samuel remained in Silom under the protection of Eli the priest. He served in the Tabernacle of God, and through his most venerable way of life became well-pleasing to God and man (I Kings 2: 26). While yet a child, sleeping in the tabernacle near the Ark of God, he heard the voice of God calling his name, and foretelling the downfall of Eli; for although Eli's two sons, Ophni and Phineas, were most lawless, and despisers of God, Eli did not correct them. Even after Samuel had told Eli of the divine warning, Eli did not properly chastise his sons, and afterwards, through various misfortunes, his whole house was blotted out in one day.

After these things came to pass, Samuel was chosen to be the protector of the people, and he judged them with holiness and righteousness. He became for them an example of all goodness, and their compassionate intercessor before God: "Far be it from me that I should sin against the Lord in ceasing to pray for you; yea, I will serve the Lord, and show you the good and the right way" (ibid. 12:23). When he asked them -- having God as witness -- if he ever wronged anyone, or took anyone's possessions, or any gift, even so much as a sandal, they answered with one voice: "Thou hast not defrauded us, nor oppressed us, nor afflicted us, neither hast thou taken anything from anyone's hand" (ibid. 12:4). When Samuel was old, the people asked him for a king, but he was displeased with this, knowing that God Himself was their King. But when they persisted, the Lord commanded him to anoint them a king, saying, "They have not rejected thee, but they have rejected Me from reigning over them" (ibid. 8:7); so Samuel anointed Saul. But Saul transgressed the command of God repeatedly, so Samuel anointed David. Yet, since Samuel was a man of God, full of tender mercy, when the Lord told him that He had rejected Saul, Samuel wept for him the whole night long (ibid. 15:11); and later, since he continued to grieve, the Lord said to him, "How long wilt thou mourn for Saul?" (ibid. 16:1). Having lived blamelessly some ninety-eight years, and become an example to all of a God-pleasing life, he reposed in the eleventh century before Christ. Many ascribe to him the authorship of the Books of judges, and of Ruth, and of the first twenty-four chapters of the First Book of Kings (I Samuel).

As we celebrate the memory of Thy Prophet Samuel, O Lord, through him we beseech Thee to save our souls.

Share the feast of Samuel the Prophet with an icon greeting ecard.