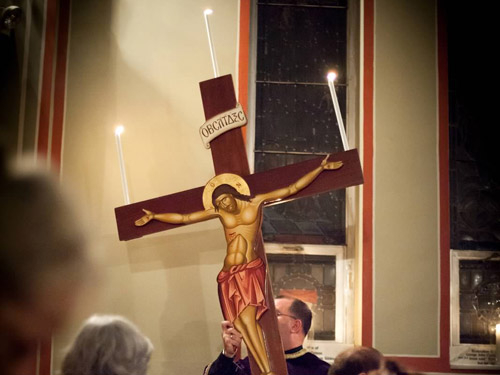 To familiarize participants with the significance of the Last Supper and its role in Holy Communion.

Table that all the young people can sit around with chairs, bread and pitcher with juice

Psalm 24 Everyone recite together
The earth is the Lord’s and the fullness thereof, the world and those who dwell therein;

Who shall ascend the hill of the Lord? And who shall stand in His holy place?
He who has clean hands and a pure heart who does not lift up his soul to what is false, and does not bear false witness.

He will receive blessing from the Lord, and vindication from the God of his salvation.

Such is the generation of those who seek Him, who seek the face of the God of Jacob.

Lift up your heads, O gates! And be lifted up, O ancient doors! That the King of glory may come in!

After the opening prayer, begin by offering bread and juice to the participants. Pass around the bread for everyone to break off a piece. Then go around and pour some juice for them. Give them all some time to eat and casually converse.

Mark 14:17-26
In the evening He came with the twelve. Now as they sat and ate, Jesus said, “Assuredly, I say to you, one of you who eats with Me will betray Me.” And they began to be sorrowful, and to say to Him one by one, “Is it I?” And another said, “Is it I?” He answered and said to them, “It is one of the twelve, who dips with Me in the dish. The Son of Man indeed goes just as it was written of Him, but woe to that man by whom the Son of Man is betrayed! It would have been good for that man if he had never been born.”

And as they were eating, Jesus took bread, blessed and broke it, and gave it to them and said, “Take, eat; this is My body.”

Then He took the cup, and when He had given thanks He gave it to them, and they all drank from it. And He said to them, “This is My blood of the new covenant which is shed for many. Assuredly, I say to you, I will no longer drink of the fruit of the vine until the day when I drink it new in the kingdom of God.” And when they had sung a hymn, they went out to the Mount of Olives.

Accept all answers and reflect back

A devout Christian who had missed receiving Communion on Sunday thought to himself: “There was a cup set for me at the Lord’s Table today, just like the place set for me at the family table at home. The cup was there for me even when I didn’t come. When I don’t come, my place at the Lord’s table, reserved especially for me, remains empty. And the Lord Jesus, the Host, Who prepares the table for me, must be truly disappointed that one of His invited guests did not show up.” As he thought about this, he said, “My place at the Lord’s Table will never be empty again – not if I can help it.”

To familiarize participants with the significance of Jesus praying in the Garden of Gethsemane and the prayer, “Thy will be done.”

Weather permitting, this session would be most effective done outdoors…near church garden or park, if available

Christ, the true light, who enlightens and sanctifies every person coming into the world, let the light of Your countenance shine upon us that we may see Your unapproachable light; and guide our steps in the way of Your commandments, through the intercessions of Your all-holy Mother and of all the Saints. Amen.

Luke 22:39-46
Coming out, He went to the Mount of Olives, as He was accustomed, and His disciples also followed Him. When He came to the place, He said to them, “Pray that you may not enter into temptation.” And He was withdrawn from them about a stone’s throw, and He knelt down and prayed, saying, “Father, if it is Your will, take this cup away from Me; nevertheless not My will, but Yours, be done.” Then an angel appeared to Him from heaven, strengthening Him. And being in agony, He prayed more earnestly. Then His sweat became like great drops of blood falling down to the ground. When He rose up from prayer and had come to His disciples, He found them sleeping from sorrow. Then He said to them, “Why do you sleep? Rose and pray lest you enter into temptation.”

Jesus took time to pray to God during His most difficult time and was still able to say to Him, “Your will Lord not mine.” We are called to surrender our whole lives to God. It is only when we surrender our lives that we can be free…We are going to take the next 10 minutes to spend in complete silence and prayer.

Lord, I know not what to ask of You. You alone know what my true needs are.
You love me more than I myself know how to love.
Help me to see my real needs, which may be hidden from me.
I dare not ask for either a cross or a consolation.
I can only wait upon You; my heart is open to You.
Visit and help me in Your steadfast love.
Strike me and heal me; cast me down and raise me up.
I worship in silence Your holy will.
I offer myself to You as a living sacrifice.
I put all my trust in You.
I have no other desire than to fulfill Your will.
Teach me to pray. Pray Yourself in me. Amen.

Break for a light Lenten lunch before this session

For the participants to understand what is meant and what was involved when our Lord was crucified.

Let us pray to the Lord. Lord Have Mercy.
Today is hung upon the Cross, He Who suspended the Earth upon the waters (3x). A crown of thorns crowns Him, Who is the King of Angels. He, Who wrapped the Heavens in clouds, is clothed with the purple of mockery. He, Who freed Adam in the Jordan, received buffetings. He was transfixed with nails, Who is the Bridegroom of the Church. He was pierced with a lance, Who is the Son of the Virgin. We worship Your Passion, O Christ. Show us also, Your glorious Resurrection.

Matthew 27:39-50
And those who passed by blasphemed Him, wagging their heads and saying, “You who destroy the temple and build it in three days, save Yourself! If You are the Son of God, come down from the cross.” Likewise the chief priests also, mocking with the scribes and elders, said, “He saved others; Himself He cannot save. If He is the King of Israel, let Him now come down from the cross, and we will believe Him. “He trusted in God; let Him deliver Him now if He will have Him; for He said, ‘I am the Son of God.’” Even the robbers who were crucified with Him reviled Him with the same thing. Now from the sixth hour until the ninth hour there was darkness over all the land. And about the ninth hour Jesus cried out with a loud voice, saying, “Eli, Eli, lama sabachthani?’” that is “My God, My God why have You forsaken Me?” Some of those who stood there when they heard that, said, “This Man is calling for Elijah!” Immediately one of them ran and took a sponge, filled it with sour wine and put it on a reed, and offered it to Him to drink. The rest said, “Let Him alone; let us see if Elijah will come to save Him.” And Jesus cried out again with a loud voice, and yielded up His spirit.

Everyone closes their eyes and is silent. Take them through the experience of the crucifixion through the senses. Do not tell them what they will be experiencing as you do it.

(Published in a Journal of Medicine)
The cross is placed on the ground and the exhausted man is quickly thrown backwards with his shoulders against the wood. The soldier feels for the depression at the front of the wrist. He drives a heavy, square wrought iron nail through the wrist deep into the wood. Quickly he moves to the other side and repeats the action, being careful not to pull the arms too tightly, but to allow some flex and movement. The cross is then lifted into place. The left foot is pressed backward against the right foot, and with both feet extended, toes down, a nail is driven through the arch of each, leaving the knees flexed. The victim is now crucified. As he slowly sags down with more weight on the nails in the wrists, excruciating fiery pain shoots along the fingers and up the arms to explode in the brain – the nails in the wrists are putting pressure on the edian nerves. As he pushes himself upward to avoid this trenching torment, he places the full weight on the nail through his feet. Again he feels the searing agony of the nail tearing through the nerves between the bones of his feet. As the arms fatigue, cramps sweep through his muscles, knotting them deep, relentless and throbbing pain. With these cramps comes the inability to push himself upward to breathe. Air can be drawn into the lungs but not exhaled. He fights to raise himself in order to get even one small breath. Finally, carbon dioxide builds up in the lungs and in the blood stream, and the cramps partially subside. Spasmodically, he is able to push himself upward to exhale and bring in life-giving oxygen. Hours of limitless pain, cycles of twisting, joint-renting cramps, intermittent partial asphyxiation, and searing pain as tissue is torn from his lacerated back while moving up and down against rough timber. Then another agony begins: a deep, crushing pain deep in the chest as the pericardium slowly fills with serium and begins to compress the heart. It is now almost over. The loss of tissue fluids has reached a critical level. The compressed heart is struggling to pump heavy, thick, sluggish blood into the tissues. The tortured lungs are making frantic effort to gasp in small gulps of air. He can feel the chill of death creeping through his tissues. Finally, he allows his body to die. All this the Bible records with simple words, “and they crucified Him” (Mark 15:24).

Have the youth open their eyes and remain silent. Place an icon of the Crucifixion so it can be seen by all and they can focus on. Ask them to think about the following question (later they will give their answers): Why would Jesus willingly go through this much pain and suffering for us? Give them 2 to 3 minutes for contemplation.

Seeing You hanging on the Cross O Christ, the God, and Creator of all, Whom as a Virgin she bore, she cried out bitterly: “O my Son, where has the beauty of Your form vanished? I cannot bear to see You unjustly crucified; hasten therefore and rise up, that I too may behold Your Resurrection from the dead on the third day.”

At the conclusion of this session, have participants proceed to church for the Un-nailing Service.