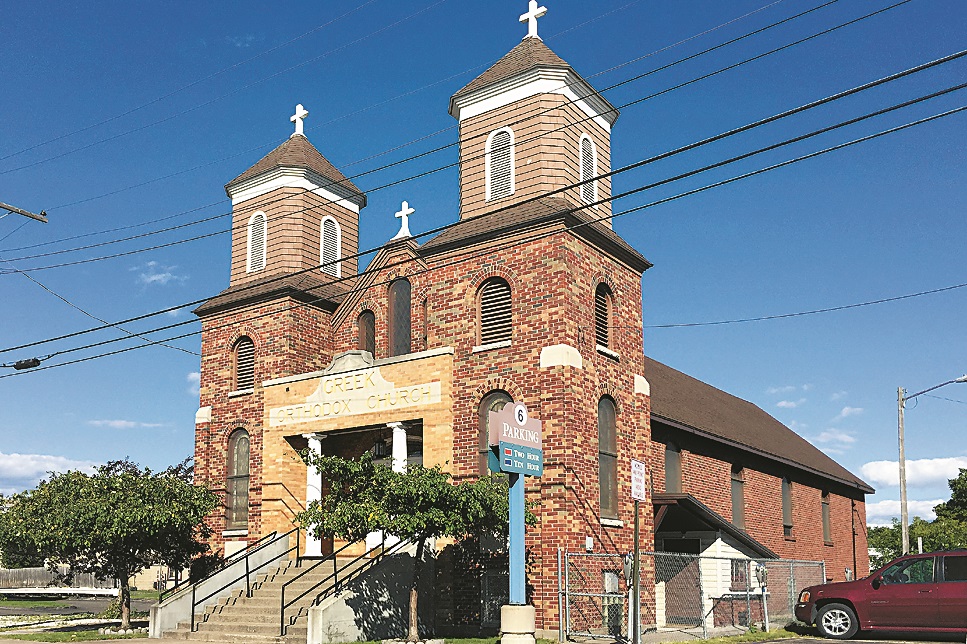 SAULT Ste. Marie, Mich. – (It’s pronounced “Soo Seint Marie, from 18th century French meaning “The Rapids of St. Mary.”) In the early 1900s, the first Greek Orthodox Christians settled in this small city on the Upper Peninsula of Michigan, about 350 miles north of Detroit, to work at a leather factory and tannery. It is not known what their total numbers were, but there were enough to start a parish in 1927.

Today, however, only about 30 permanent members comprise the parish of St. George. They gather once a month for Divine Liturgy officiated by a visiting priest, Fr. Ciprian Streza, the full-time priest from Archangel Gabriel Church in Traverse City, nearly 180 miles away on the Lower Peninsula. Fr. Ciprian has been making the trip for nearly five years. Thanksgiving and Christmas services are always held and, during Holy Week, the Metropolis of Detroit assigns an available supply priest to conduct the services.

Sault Ste. Marie (population about 14,000) sits on the south bank of the St. Mary’s River, which connects Lake Superior with the other Great Lakes, and is the northern terminus for Interstate 75. It is the third oldest European settlement west of the Appalachians, having been established by French Jesuit priest Fr. Jacques Marquette who founded a Catholic mission near an Indian village. It grew into a fur-trading settlement.

Across the river is its twin city, Sault Ste. Marie, Ontario, which also has a small Greek Orthodox community served by visiting priests from the Metropolis of Toronto. In the early years of the parish, services took place in a rented hall by visiting priests from Chicago and Detroit, according to information contributed by parishioners Dina Kritselis. By 1925, weddings and baptisms were held in a rented funeral home.

In the early 1930s, the community built its first church building and a priest from Chicago (name unknown) who also was an iconographer came to hold services. Archbishop Athenagoras consecrated the church in 1939.

The first permanent priest assigned was Archimandrite Evgenis Loucopoulos, who served from 1941-64. In 1947, following a wedding, fire from an oil lamp destroyed the church. Many local churches offered their facilities to the parishioners. They selected St. James Episcopal Church to hold services until a new (the present) church could be built.

Following his death in 1964, the community was without a priest for a year until the arrival of Cyprus-born Archimandrite Meletios Christoforou, who served from 1965-74. After Fr. Christoforou, a series of temporary priests served the parish, beginning with Holy Cross graduate Fr. Peter Metallinos, who came every third Sunday of each month. In summer, he would drive to the community and fly up in the winter. Among the young people who had grown up in the community during its early decades was now Bishop Ilia Katre of Philomelion, who has headed the Albanian Orthodox Diocese for many years. He oversees parishes in Illinois, Massachusetts, Nevada, New Jersey and Canada