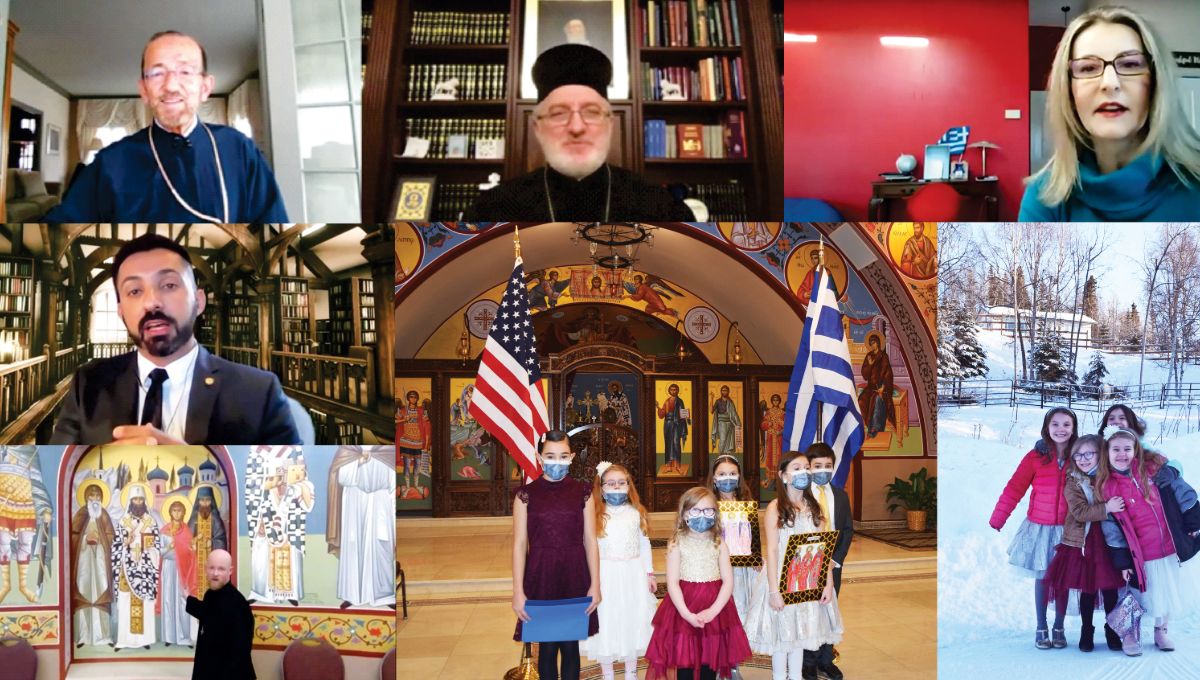 The Greek Orthodox Metropolis of San Francisco Greek Language and Culture Ministry sponsored a virtual event in celebration of the Feast of the Three Hierarchs and Greek Letters Day on Saturday, January 30, 2021. The event was livestreamed from the Holy Transfiguration Greek Orthodox Church in Anchorage, AK, with presentations from Greek School and Sunday School students from throughout the Metropolis.

The program began with a picturesque video showing the beautiful scenery and topography of Alaska. Greek Language and Culture Ministry chair, Katerina Iconomou, welcomed the attendees to the event, including His Eminence Archbishop Elpidophoros of America and His Eminence Metropolitan Gerasimos of San Francisco. Other special guests included the Consul General of Greece in San Francisco Socrates Sourvinos, and the Consul General of Greece in Los Angeles Evgenia Beniatoglou.

In his welcome message to the over 150 attendees, Archbishop Elpidophoros stated, “Today your celebration of the Three Hierarchs is truly an example to the entirety of the Archdiocese. The Metropolis of San Francisco’s commitment to the traditions of the Church – spiritual, cultural and linguistic, is both praiseworthy and necessary. We cannot hand on to the next generation the thing that we have let go of. And the fact that your Metropolis celebration is taking place in Alaska – a state usually associated with our Russian brethren – makes this day all the more special.” As he concluded his remarks, Archbishop Elpidophoros shared, “You are all to be commended for your devotion and dedication to the Holy Three Hierarchs and the Day of the Greek Letters. I pray that this day of celebration will extend throughout the Metropolis and the Archdiocese, as an example of faith in our church, hope for our youth, and love for glorious inheritance.”

Following the Invocation offered by His Eminence Archbishop Elpidophoros, Georgios Tsolias chanted the Apolytikion for the Three Hierarchs. Tsolias is the chanter at the Annunciation Greek Orthodox Cathedral in San Francisco.

A special presentation was offered by Metropolis Greek Language and Culture Ministry team member, Dr. Elias Petrou, who spoke on “The Three Hierarchs; Defenders of Christianity and Protectors of Greek Letters.” Professor Petrou is a Research Associate Specialist for the Digital Database/Library Thesaurus Linguae Graecae® at the University of California, Irvine. In his informative and thought-provoking presentation, Dr. Petrou offered this commentary, “The Three Holy Fathers are called bright beacons and lighthouses because as the lighthouse leads the ship to a safe harbor, they lead us to our safe harbor, especially in these difficult times. Today we are celebrating the victory of faith and the prevalence of knowledge and truth. The Three Hierarchs should be our example and guide us during these harsh times. His presentation concluded with this directive, “But most important, take care of the education of our children, as parents and teachers, and cultivate their soul in the right way. Let us keep the faith and the truth alive, not only for us, but more importantly for the next generation, our kids. So it is our duty for the better days to come.”

Rev. Father Vasilios Hillhouse, proistamenos at Holy Transfiguration Church in Anchorage, took the participants on a virtual tour of the church, which included a beautiful display of iconography, intricate wood carvings, and a unique icon to the region featuring four Saints from Alaska – Saint Herman, Saint Peter the Aleut, Saint Juvenaly, and Saint Innocent. Alaska is the largest state in the United States, and covers more land than California, Texas and Montana combined. Holy Transfiguration is the northernmost parish in the Greek Orthodox Archdiocese, and the only Greek Orthodox Church in the entire state of Alaska.

At the conclusion of the program, His Eminence Metropolitan Gerasimos congratulated all those involved, especially the students and their “enthusiastic participation in today’s program which truly showcased their commitment to learning about the Three Hierarchs and their contributions to our Faith and Hellenic ideals. What our clergy and teachers are imparting to these students is not just a lesson for today or tomorrow, my dear friends, but it will continue to impact their entire lives. This celebration today is centered on the Feast of the Three Hierarchs which recognizes both the theological and scholarly contributions of these three wonderful Saints – Basil the Great, Gregory the Theologian and John Chrysostom. Their work, especially in the area of education, was a labor of love, it is a gift, and one that we must recognize as a priority and as a lifelong process.”

Congratulations and gratitude are extended to the Metropolis of San Francisco Greek Language and Culture Ministry who organized this event under the leadership of Katerina Iconomou, with the assistance of Georgia Covell, Gabriella Papatzimas, Dr. Elias Petrou, and Anastasia “Tessy” Tzoytzoyrakos. Additional support was provided by the parish of Holy Transfiguration in Anchorage from Rev. Father Vasili Hillhouse, Cecile Davis, Luke Cooley, Dionisia Menegatos, Sara Menegatos, Christina Whitaker and Emmanuela Whitaker.