The wine is a pure grape sweet wine. It is often the Greek sweet wine Mavrodaphne or the sweet wines from Samos or Cyprus.

The holy bread (also called prosphora or offering) must be made from pure wheat flour and water, and is leavened and well baked (see recipe at end). Usually, there are five loaves to represent our Lord's miracle of feeding of "five thousand men besides women and children" with only five loaves of bread (Matt. 14:17-21). But if it is not possible to make five loaves, at least one is necessary for the offering.

In the center of the top of the bread is a round seal. During the Office of Oblation, the priest cuts small portions of the bread to prepare for Holy Communion. The seal on the bread is illustrated below: 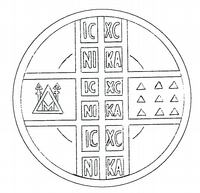 The Service of the Office of Oblation

The Service of the Office of Oblation begins with the Priest coming before the Oblation table (Prothesis). He bows, makes three reverences, and says quietly 3 times: "O God, be gracious unto me a sinner, and have mercy upon me." He takes the bread in his hands, elevates it to his forehead with the seal of the loaf upward, and says: "You have redeemed us from the curse of the law by thy precious Blood. By being nailed to the Cross and pierced by the spear, you have become a foundation of immortality for all people. O our Savior, Glory to you." And then he says: "Blessed is our God always, now and ever, and unto ages of ages. Amen."

The priest then begins the cutting of the bread. He takes the bread in his left hand and the spear or lance in his right hand, makes the sign of the Cross over the seal with the lance and says three times: "In remembrance of Our Lord and God and Savior Jesus Christ."

First, he moves to the central portion of the seal bearing the inscription ICXC NIKA (Jesus Christ Conquers) in its four corners. This portion is called the Amnos, or the Lamb, which represents our Lord who takes on the sins of the world. The Lord is called "Amnos" or Lamb, because like a lamb, He accepted His death with humility and without protest. 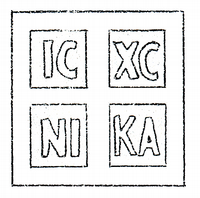 The priest then places the Amnos upon the Paten, makes a deep crosswise cut on the back of the Seal without cutting through it and says: "Sacrificed is the Lamb of God who takes away the sin of the world, for the life of the world and its salvation."

The Amnos is then turned so the seal is upward, and pierces with the lance the section marked NI, saying: "One of the soldiers with a spear pierced his side and immediately there came forth blood and water. And he who saw it bore witness, and his witness is true." The priest then pours wine and a little water into the Chalice, blesses it and says: "Blessed is the union of thy holy gifts, always, now and ever and unto ages of ages. Amen

To the right of the Amnos (on the left of the bread as the priest faces it) is the portion for the Mother of God. From this second portion, the priest cuts out the triangle with the letter M (for Mary), and places it on the Paten. This is in commemoration of our Most Blessed Lady, Panagia, the Theotokos, Mother of God, to whom we pray to intercede for us to her Divine Son. As the priest places this portion to the right of the Amnos, he says: "On Thy right hand stood the Queen clothed in garment wrought with gold and arrayed in many colors" (Ps. 44:10). 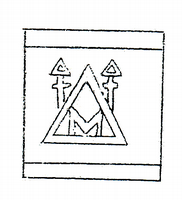 The Portion Commemorating the Mother of God

From the third prosphoron, the left of the Amnos (on the right as the priest faces it) cuts out the nine small triangles. He places them on the Paten on the left side of the Amnos, in the same position as they were on the bread. These nine triangles symbolize the nine orders of saints and the angels in heaven, as follows:

The Nine Portions Commemorating the Nine Orders of Angels and Saints

The last portion is for the Priest who prays for his own salvation.

After cutting out the portions of the bread, the Paten should look as follows: 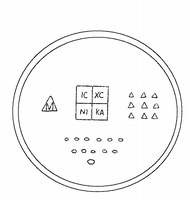 When the Priest completes the Office of Oblation, he places upon the Paten the Asteriscos (Star Cover). The Paten with the Asteriscos and the Chalice are covered with separate veils. Both are then covered with a larger veil, which is called the Aer.

The Office of Oblation is concluded with a prayer by the priest offered to our Lord, asking Him to bless the gifts of bread and wine, accept them in remembrance of those who offer them, and keep the priest pure during the celebration of the Divine Liturgy.

Sacred Objects Used During the Office of Oblation

The following objects are used during the Office of Oblation:

The Prothesis ()blation table) is the table used for the Office of Oblation. It is located to the left of the Holy Altar table.

The Paten (diskarion) is the raised plate where the bread is placed. It symbolizes the manger of Bethlehem. 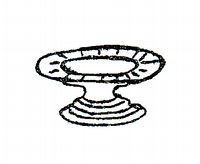 The Chalice is the cup where the wine is poured. It symbolizes the cup that our Lord used at the Last Supper.

The Spear or Lance (Lonche is used to cut the bread. It symbolizes the spear that the soldier used to pierce the side of our Lord when our Lord was hanging on the Cross.

The Asteriscos is the star cover that is placed on the Paten. It is made of metal so that it can support and prevent the small veil from coming in contact with the bread. It symbolizes the star of Bethlehem.

The aer is a veil that covers both the paten and the chalice. It symbolizes the linen cloth in which Joseph and Nicodemus placed the most Sacred Body of our Lord when they took it down from the Cross. It also symbolizes the Loftiness and Glory of Jesus Christ and his Saving Grace by which His Church is covered and protected and even "the gates of hell shall not prevail against it" (Mt 16:18). Under the Aer, separate smaller veils cover the Paten with the Asteriscos and the Chalice. They are often in the shape of a cross, with the four points coming down as flaps over the Paten or the Chalice, as depicted below. 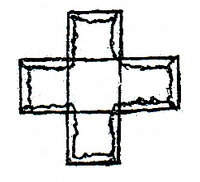 Veil Cover for the Paten

Veil Cover for the Chalice

The holy spoon is used to administer Holy Communion to the Faithful. It symbolizes the tong that the Angel used to take the burning coal from the Altar in order to touch the lips of Isaiah to purify him from his sins (Isaiah 6:7).

The Zeon is both the small vessel and the warm water it contains, which the priest pours into the Chalice. The warm water symbolizes the mixture of warm blood and water that flowed from the side of our Lord when the soldier's spear pierced Him.

The Antimension (Corporal) is a silken or linen cloth, having upon it the representation of the Deposition of Christ in the tomb and the four Evangelists on the four Corners. It is placed on the Holy Altar table, and the Paten and the Chalice are placed on it for the consecration of the gifts into the Holy Communion.

Two Sponges are used for cleaning the sacred vessels after the Divine Liturgy. One is used to wipe the Paten after the portions of the bread have been dropped into the Chalice; this sponge is kept on the Altar in the Holy Antimension (Corporal). The other sponge is used to wipe the Holy Chalice after it has been washed, and is kept on the Oblation table.

The portions of bread remaining after the Office of Oblation. It is not consecrated. It is given to worshipers after the Divine Liturgy. Antidoron means "instead of the Gift."

The Lord is called Amnos (Lamb), because like a Iamb He accepted His death with humility and without protest. This term is used to refer to the portion of the bread in the center of the seal inscribed ICXC NIKA.

The offering of gifts.

Holy bread offered for the preparation of the Sacrament of the Holy Eucharist.

Dissolve yeast in water. Add sifted flour and salt, and knead until smooth. Place in bowl, cover, and let rise. When double in size, knead again. Put dough in a bowl cake pan that has been floured only (not greased). Dip seal in flour and stamp dough firmly, allowing seal to remain in stamped position until ready to bake, after permitting dough to rise again. Remove seal and bake 30 minutes at 370 degrees temperature. Cover the bread with aluminum foil to avoid burning it.

This will make one prosphoron. For more, add the appropriate material to meet the need for the number of prosphora you intend to make.