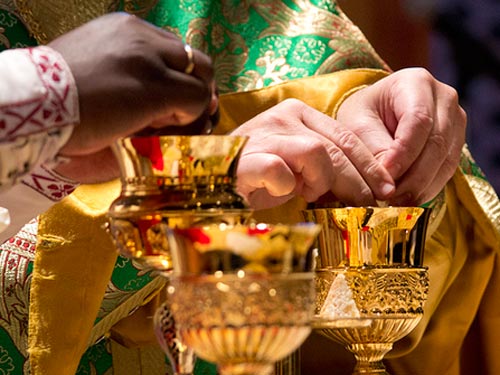 "We knew not whether we were in heaven or on earth, for surely there is no such splendor or beauty anywhere on earth. We cannot describe it to you; we only know that God dwells there among men and that their Service surpasses the worship of all other places..."

In the latter part of the tenth century, Vladimir the Prince of Kiev sent envoys to various Christian centers to study their form of worship. These are the words the envoys uttered when they reported their presence at the celebration of the Eucharist in the Great Church of Holy Wisdom in Constantinople. The profound experience expressed by the Russian envoys has been one shared by many throughout the centuries who have witnessed for the first time the beautiful and inspiring Divine Liturgy of the Orthodox Church.

The Holy Eucharist is the oldest experience of Christian Worship as well as the most distinctive. Eucharist comes from the Greek word which means thanksgiving. In a particular sense, the word describes the most important form of the Church's attitude toward all of life. The origin of the Eucharist is traced to the Last Supper at which Christ instructed His disciples to offer bread and wine in His memory. The Eucharist is the most distinctive event of Orthodox worship because in it the Church gathers to remember and celebrate the Life, Death, and Resurrection of Christ and, thereby, to participate in the mystery of Salvation.

Rather, he comes as a member of the Community of Faith who participates in the very purpose of the Church, which is the Worship of the Holy Trinity. Therefore, the Eucharist is truly the center of the life of the Church and the principal means of spiritual development, both for the individual Christian and the Church as a whole. Not only does the Eucharist embody and express the Christian faith in a unique way, but it also enhances and deepens our faith in the Trinity. This sacrament-mystery is the experience toward which all the other activities of the Church are directed and from which they receive their direction.

The Eucharist, the principal sacrament mystery of the Orthodox Church, is not so much a text to be studied, but rather an experience of communion with the Living God in which prayer , music, gestures, the material creation, art and architecture come into full orchestration. The Eucharist is a celebration of faith which touches not only the mind but also the emotions and the senses.

Throughout the centuries, Christians have seen many dimensions in the Eucharist. The various titles which have come to describe the rite bear witness to the richness of its meaning. The Eucharist has been known as the Holy offering, the Holy Mysteries, the Mystic Supper, and the Holy Communion. The Orthodox Church recognizes the many facets of the Eucharist and wisely refuses to over-emphasize one element to the detirement of the others. In so doing, Orthodoxy has clearly avoided reducing the Eucharist to a simple memorial of the Last Supper which is only occasionally observed. Following the teachings of both Scripture and Tradition, the Orthodox Church believes that Christ is truly present with His people in the celebration of the Holy Eucharist. The Eucharistic gifts of bread and wine become for us His Body and His Blood. We affirm that these Holy Gifts are transfigured into the first fruits of the New Creation in which ultimately God will be "all in all".

As it is celebrated today, the Divine Liturgy is a product of historical development. The fundamental core of the liturgy dates from the time of Christ and the Apostles. To this, prayers, hymns, and gestures have been added throughout the centuries. The liturgy achieved a basic framework by the ninth century.

There are three forms of the Eucharist presently in use in the Orthodox Church:

In addition to these Liturgies, there is also the Liturgy of the Pre-Sanctified Gifts. This is not truly a eucharistic liturgy but rather an evening Vesper Service followed by the distribution of Holy Communion reserved from the previous Sunday. This liturgy is celebrated only on weekday mornings or evenings during Lent, and on Monday, Tuesday, and Wednesday of Holy Week, when the full Eucharist is not permitted because of its Resurrection spirit. The Eucharist expresses the deep joy which is so central to the Gospel.

The Divine Liturgy is properly celebrated only once a day. This custom serves to emphasize and maintain the unity of the local congregation. The Eucharist is always the principal Service on Sundays and Holy Days and may be celebrated on other weekdays.

However, the Divine Liturgy is not celebrated by the priest privately, without a congregation. The Eucharist is usually celebrated in the morning but, with the Bishop's blessing, may be offered in the evening. The Greek Orthodox Archdiocese has recently encouraged the celebration of the Liturgy in the evening after Vespers, on the vigil of major Feast and Saints Days.

The Actions of Divine Liturgy

Although there are many symbolic interpretations of the Divine Liturgy, the most fundamental meaning is found in the actions and prayers.

The Service of Preparation

Prior to the beginning of the Liturgy, the priest prepares himself with prayer and then precedes to vest himself. The vestments express his priestly ministry as well as his office. Next, the priest goes to the Proskomide Table which is on the left side of the Altar Table in the Sanctuary. There, he prepares the offering of bread and wine for the Liturgy. Ideally, the leavened loaves of bread, and the wine from which the offering is taken, are prepared by members of the congregation. The elements are presented to the priest before the service, together with the names of those persons, living and dead, who are to be remembered during the Divine Liturgy. The offering symbolically represents the entire Church gathered about Christ, the Lamb of God.

The Liturgy of the Catechumens

The Divine Liturgy begins with the solemn declaration: "Blessed be the Kingdom of the Father and of the Son, and of the Holy Spirit now and for ever more." With these words we are reminded that in the Divine Liturgy the Church becomes a real manifestation of God's Kingdom on earth.

Since the first part of the Liturgy was designed originally for the Catechumens, those being schooled in the faith, had a very instructive quality. The Eucharist also has elements which are in common with other Services. We gather as Christians who share a common faith in the Holy Trinity. We sing and pray as a people united in Christ, who are not bound by time, space, or social barriers.

The Little Entrance is the central action of the first part of the Liturgy. A procession takes place in which the priest carries the Book of Gospels from the sanctuary into the nave. The procession directs our attention to the Scripture and to the presence of Christ in the Gospel. The entrance leads to the Epistle lesson, the Gospel, and the Sermon.

The Liturgy of the Faithful

In the early Church, only those who were baptized and not in a state of sin were permitted to remain for this most solemn part of the Liturgy. With the Great Entrance marking the beginning of this part of the Liturgy, the offering of bread and wine is brought by the priest from the Preparation Table, through the nave, and to the Altar Table. Before the offering can proceed, however, we are called upon to love one another so that we may perfectly confess our faith. In the early Church, the Kiss of Peace was exchanged at this point. After the symbolic kiss of Peace, we join together in professing our Faith through the words of the Creed.

Only now can we properly offer our gifts of bread and wine to the Father as our Lord directed us to do in His memory. This offering is one of great joy, for through it we remember the mighty actions of God through which we have received the gift of salvation, and especially the Life, Death, and Resurrection of Christ. We invoke the Holy Spirit upon ourselves and upon our offering, asking the Father that they become for us the Body and Blood of Christ. Through our thanking and remembering the Holy Spirit reveals the presence of the Risen Christ in our midst.

The priest comes from the altar with the Holy Gifts, inviting the congregation to draw near with reverence of God, with faith, and with love." Our sharing in the Eucharist Gifts not only expresses our fellowship with one another, but also our unity with the Father in His Kingdom. Individuals approach the Holy Gifts and receive the Eucharistic bread and wine from the common chalice. The priest distributes the Holy Gifts by means of a communion spoon. Since the Holy Communion is an expression of our Faith, reception of the Holy Gifts is open only to those who are baptized, chrismated, and practicing members of the Orthodox Church.

The Liturgy comes to an end with prayer of Thanksgiving and the Benediction. At the conclusion of the Eucharist, the congregation comes forward to receive a portion of the liturgical bread which was not used for the offering.