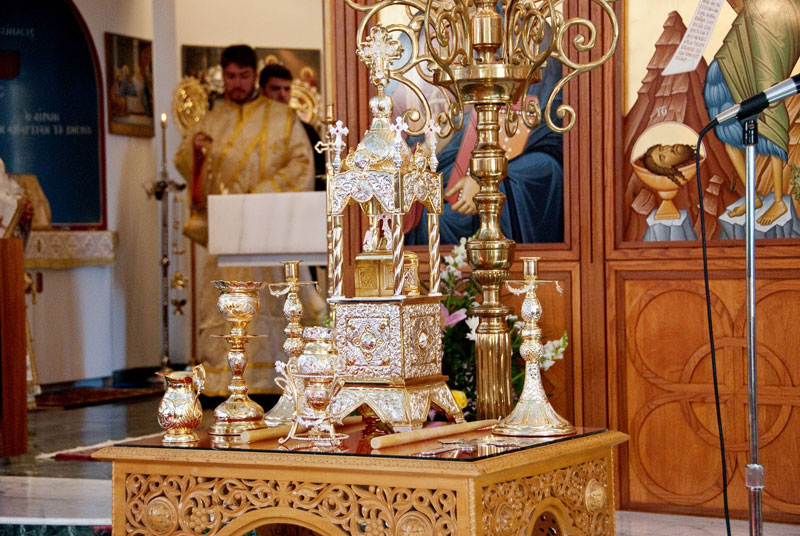 Katasarkion: The white linen cloth covering represents the Lord’s burial shroud. Katasarkion means “over the flesh.” It is placed on the Holy Altar Table and will never be removed.

Altar Cloths or Ependytes: These brighter, more elaborate and richly textured Altar cloths symbolize the Glory of God, since the Holy Altar Table represents the Throne of God. They are placed over the Katasarkion.

Holy Gospel Book: Contains the Good News about Christ and the main content of Christian revelation. On the Holy Altar Table the Gospel represents the teachings of Christ. It is placed directly on top of the Antimension.

Artoforion or Tabernacle: An elaborate gold and silver box with a Cross-bearing dome in which the Presanctified Body of Christ is placed and reserved for Communion to people who cannot participate in the Liturgy because of illness or other reasons. The Artoforion is symbolic of the presence of our Lord on the Holy Altar Table.

Kandili: The oil vigil lamp holds the eternal light that is kept burning at all times in front of the Artoforion on the Holy Altar Table. It is symbolic of the Church of Christ as it shines forth with the light of grace to enlighten all people and represents the constant presence of Christ.

Candle Sticks: Represent the Light of Christ that shines forth during the Sacred Services.

Chalice: The cup that contains the consecrated elements of Bread and Wine that are imparted as Communion of the Body and Blood of Christ.

Communion Spoon: Small spoon with a long handle and a small cross on its end used to impart the Body and Blood of Christ to the communicant.

Diskarion or Paten: The plate on which the ceremonial portions of the Eucharist Bread are placed to be offered and consecrated.

Asteriskos: Placed over the Diskarion as a frame for a cover and signifies the star that led the Magi to Bethlehem and stood over the Manger.

Lance: Small liturgical knife in the shape of a lance with a small cross on its end used to take the pieces of the Eucharistic bread that are then placed on the Diskarion.

Zeon: The container of heated water that together with the Consecrated Wine symbolizes the Blood and water that came out from the side of Christ when pierced by the centurion before the Body was brought down from the Cross.

Blessing Cross: Used by the celebrant to bless the faithful at various times during the Sacred Services.

Processional Cross and Exapteriga: Placed directly behind the Holy Altar Table on long staffs, they are carried during processions. The Exapteriga represent the Six-Winged Seraphim, the highest order of Angels that surround the Throne of God in heaven.

Gold Censers with Stand: Contain burning incense used by the celebrant to cense the icons and the congregation. The incense represents the prayer of mind and heart and is directed to heaven.

Katzion: Hand-censer used during the Bridegroom Services of Holy Week.