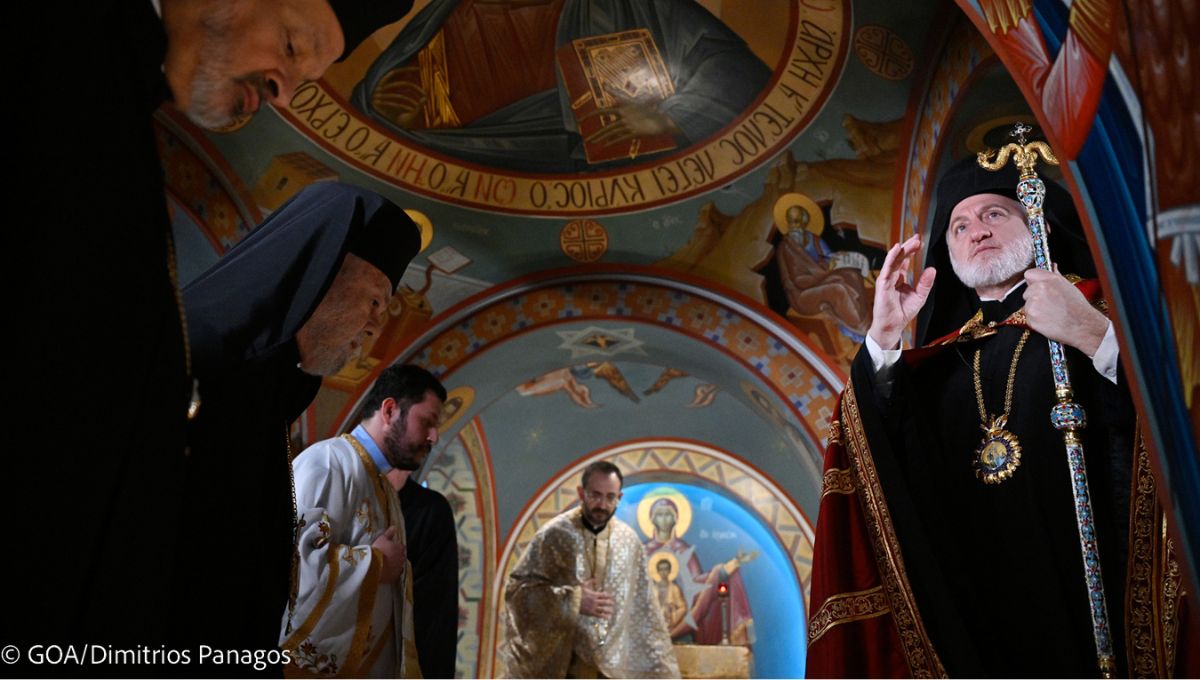 Homily at the Great Vespers

Your Graces and Trustees of Saint Photios National Shrine,

To be here at the Saint Photios National Shrine, during these days when we celebrate Τὰ Ἅγια Φῶτα, is a very special joy for me. This Vespers in the Shrine’s Chapel, when we sing the wondrous hymn, “O Gladsome Light,” manifests the mission of the Shrine for all the world to see. Saint Photios is all about bringing the light of Christ into the world, so that every person who passes through its doors witnesses the illumination of our Orthodox Christian Faith.

We are observing the Fortieth Anniversary of the founding of the Shrine – the first of two in our Sacred Archdiocese. The ever-memorable Archbishop Iakovos established it in St. Augustine, Florida, where Asia Minor Greeks had sought refuge and opportunity in the New World. And he named it for the Ecumenical Patriarch whose missionary endeavors are truly legendary.

Saint Photios was true to his name – for he brought the light of the Orthodox Faith to the lands of the Slavic Peoples. He sent forth from Constantinople the two brothers – Saints Cyril and Methodios – who not only preached and taught the Gospel, but even gave a written form of language to the people they were sent to bring the Good News. There is a reason that Slavic languages use what is called the Cyrillic alphabet, and that this alphabet has many Greek letters and sounds.

Here at the Saint Photios National Shrine, the spirit of that most famous Ecumenical Patriarch lives on. There is a mission here that extends beyond commemorating our past, for our past is but a prologue to our future.

Tonight, as we celebrate this Great Vespers, giving thanks for the Shrine and all its good work, we acknowledge the partnerships that it has formed with the local communities and with the Orthodox Christian Mission Center. OCMC was begun by Archbishop Iakovos with an apostolate for overseas missionary activity. And this ministry was a gift of our Sacred Archdiocese to all the Orthodox in America.

But as we contemplate our future as a Church, we also recognize the need for home mission, and the Saint Photios Shrine is engaging that aspect as well. Forty years on, Saint Photios is ready for its next chapter. Just as the Israelites entered the Promised Land after forty years in the wilderness, I am convinced that there are many new, promising endeavors for the Shrine. We celebrate this milestone in the history of the Shrine, but our eye is on the future.

Our Sacred Archdiocese has just celebrated its Centenary, and we all recognize that the legacy of the brave πρωτοπόροι – whether they came from the Diaspora, from Greece, from Asia Minor, or from Cyprus, is visible in every community across our Sacred Archdiocese.

Just as the souls who came here to Florida in the Eighteenth Century, and made a New Smyrna in the New World, carried within themselves the essence of their Orthodox Christian Faith and their Greekness, we carry on for them, and in their name. As the saying goes, we stand on the shoulders of the giants who came before us.

Today our Shrine continues to shine the light of Christ with the help of an abundance of clergy and laity who support its efforts. We have representation from every Metropolis and from the most important organizations of the Omogeneia. We are grateful for the dedication of everyone involved with the Shrine, and for all who support its mission.

In the Vespers this evening, we sang of the “Gladsome Light of the Holy Glory of the Immortal Father,” our Lord Jesus Christ. His light never sets. It never wanes. He is, as we chant at the Holy Pascha, the Ἀνέσπερον Φῶς, Whom we glorify Risen from the dead.

And in Him, all the souls of our spiritual and physical ancestors find their rest. Here at the Saint Photios Greek Orthodox National Shrine, we remember them with love and devotion, even as we minister to the living with the unchanging Good News that Patriarch Photios the Great sent forth over a thousand years ago. May we ever do honor to his memory. Amen.