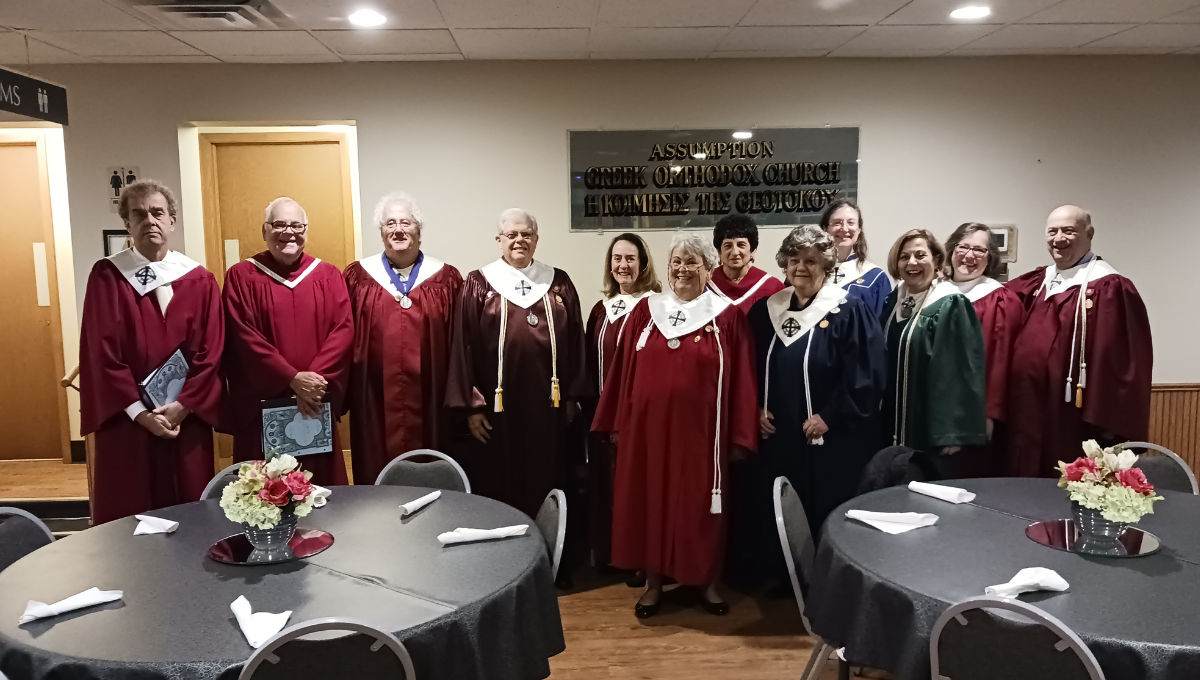 Musicians from the National Forum of Greek Orthodox Church Musicians and the Federation of Greek Orthodox Church Musicians Chicago Metropolis gathered at Assumption Church in Madison, WI over the weekend of October 15th and 16th to celebrate the memory of composer and director Michael B. Petrovich on the occasion of what would have been his 100th birthday. National Forum Chairman Nick Chimitris and Chicago Federation President Ruth Faklis along with musicians from throughout the Chicago Metropolis joined the Assumption choir under the direction of George Tzougros in singing the Petrovich arrangement of the St John Chrysostom Divine Liturgy. Very Reverend Archimandrite Christ Margellos celebrated the Divine Liturgy.
Interestingly enough, Dr. Petrovich’s vocation was Professor of History at the University of Wisconsin, Madison and music was his avocation. Dr. Petrovich came to Madison in 1950 and joined his beloved Assumption choir and soon became its director. Both as choir director and composer-arranger, Dr. Petrovich’s settings preserved the original melodies and spirit in “a cappella” choral adaptations within the capabilities of even a modest church choir while still offering stimulating challenges. This is evident in his settings of the Doxology and Divine Liturgy which the Midwest Federation (now the Church Musicians Federation of the Chicago Metropolis) debuted at its 1972 conference. In fact, the 50th anniversary of this debut was also celebrated during the weekend’s festivities since it was sung 50 years previously to the day. National Forum Chairman Nick Chimitris presented a rare vinly LP album recording of that debut to Nina Bartell, daughter of Dr. Petrovich, during the weekend celebration.
Dr. Petrovich regarded as his greatest contribution to the music of the Greek Orthodox Church in America not his own arrangements but rather whatever influence he may have had on younger musicians such as John Revezoulis, Peter Tiboris and Nicolas Maragos, all of whom were members of his choir during their student days. As Dr Petrovich liked to say, “A teacher can have no greater joy than to be surpassed by his pupils”
The National Forum of Greek Orthodox Church Musicians honored Dr. Petrovich in 1994 by awarding him the Saint Romanos Medallion, the highest honor it can bestow to those who have made exemplary contributions to church music in the Greek Orthodox Archdiocese of America. The Federation of Greek Orthodox Church Musicians Chicago Metropolis honors Dr. Petrovich by offering the Michael B. Petrovich Memorial Scholarship to those students pursuing a degree in music. May his memory be eternal!