Print Madonnas of the Aegean Sea 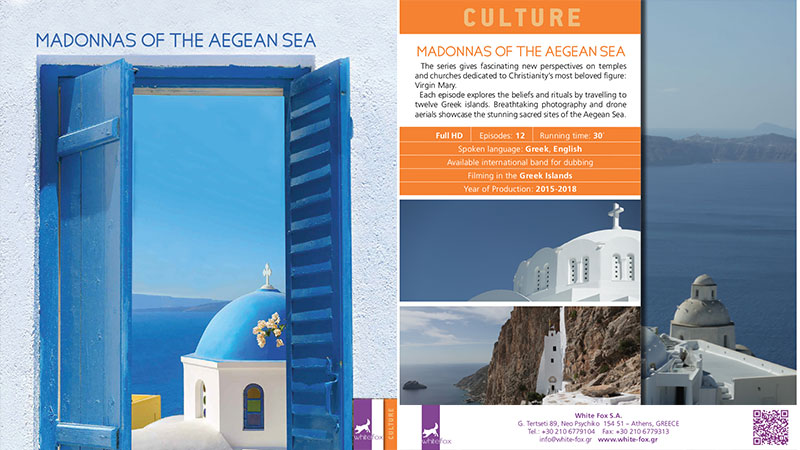 The series "Madonnas of the Aegean Sea" gives fascinating new perspectives on temples and churches dedicated to Christianity's most beloved figure: Virgin Mary. Each episode explores the beliefs and rituals by traveling to twelve Greek islands. Breathtaking photography and drone aerials showcase the stunning sacred sites of the Aegean Sea.

Produced by White Fox, S.A., Athens Greece, and provided with permission for usage to the Greek Orthodox Archdiocese of America.

The Aegean Sea, has always been a bridge of communication, a sacred place, a place of pilgrimage. In the Aegean world there is a faith, a mother, the most sacred and holiest figure of Creation, the Virgin Mary. A documentary that travels you to the Greek island and to churches dedicated to Virgin Mary.

Panagia of Tinos, also known as the Megalohari of Tinos (Great Grace) or Evangelistria of Tinos (Our Lady of Good Tidings)! A unique pilgrimage and a journey through time and history to the most important cultural, religious and historical place of the Aegean archipelago. There have been endless recorded miracles that have taken place here.

A journey to the imposing church of Panagia Ekatontapiliani (also known as the Church of 100 doors). The largest and oldest Christian church in Greece ... With reminiscences  of Hagia Sophia. An island known since the antiquity for its marbles … Temples and shrines, with Asklipieio being the most important one, are built with Parian marble and famous sculptures were also made of it, such as the Hermes of Praxiteles  as well as the Aphrodite of Milos. The Ekatontapyliani of Paros is thought to be the intermediate link between the ancient and modern Greek history regarding architecture and building structure.

A journey to the Kastriani church of Kea island. A church built on a rock… Panagia Herself wanted her home to be here… so she revealed her icon and asked to build her a church on this beautiful island…Her icon is miraculous…

Here where the light is worshiped as a deity… a journey to the “Panaghia Filerimos”, dedicated to “Zoodochos Pigi”, built by the Knights in the place of an older Byzantine church…a journey to
Panaghia Tsambika that blesses the island of Rhodes…

Panagia Kanala, one of the most important pilgrimages of the islands… the church is a little oasis in dry Cycladic landscape! Freshness of countless pine trees and a panoramic sea view... A place that combines religious interest, with the beauty of the Aegean archipelago.

Two episodes full of the unique beauty of Santorinι inland. Churches majestic or humble and quiet, carved into the rock or located inside caves in rough heights, hide valuable treasures. All of them have a story to narrate, miracles to reveal... Panagia Episkopi, Panagia Glykofilousa (A sweetly kissing Madonna"), Panagia Platsani and many others …

Folegandros… one of the most beautiful Greek islands.  A simple and relaxing atmosphere reigns all around the island and on the top of a rocky hill the church of Panaghia, the most well known church of Folegandros. Whitewashed, dedicated to the Assumption of Virgin Mary overlooks the peaceful island.

An island that offered its entire commercial fleet to the struggle of Greeks for liberation. A glorious past gives to travelers serenity and magnificence. At Psara, one can visit the Monastery of the Dormition of Virgin Mary, with manuscripts and religious books printed in Moscow and Venice. During the historic destruction of Psara, the only thing to survive was the icon of Virgin Mary crafted by El Greco.

The island of the endless blue. We are visiting one of the most beautiful and imposing monasteries dedicated to Panagia, that of Panagia Chozoviotissa. Leaving behind the monastery, we are reaching Panagia Epanachoriani, facing the Metochi of Chozoviotissa dedicated to St. George the Varsaimite. And in Katapola, the second port of the island, we are visiting Panagia Katapoliani.