Print Living in a Pluralistic World 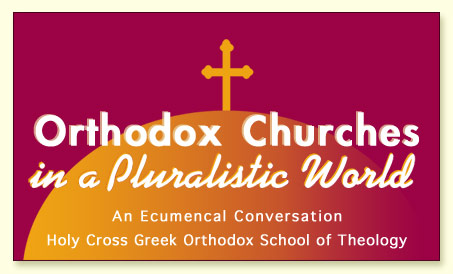 "Orthodox Churches in a Pluralistic World: An Ecumenical Conversation" was presented by Hellenic College / Holy Cross Greek Orthodox School of Theology, in cooperation with the World Council of Churches, Boston Theological Institute and the Inititiatives in Religion and Public Life Harvard Divinity School.

The primary purpose of the conference is to explore the public presence of the Orthodox Church in a pluralistic world. By "public presence" we refer to those aspects of the Orthodox Church's life that can be seen and heard by everybody, having the widest possible publicity and, furthermore, whatever we understand to be the world, which is common to all and is distinguished from our own private place in it. A secondary purpose is to examine ways in which Orthodox Churches have in the past, and can continue in the present and the future, contribute to the reconciliation of communities, which for religious, ethnic, political and other reasons find themselves in opposition to one another. Here, the obvious regional areas of Bosnia, Kosovo, and the Middle East where Orthodox Christians are in conflict with others can server as case studies of Orthodoxy's contribution to reconciliation.

Because of the Orthodox understanding of creation, the human person, community and the universality of the Christian gospel, Orthodoxy must be in constant dialogue with the society in which it lives. The effectiveness of such active presence depends not only on what Orthodoxy has to offer to the modern world, but also from how the Orthodox churches interact and converse with the world. For this reason, the conference will be interdisciplinary, brining together theologians, church hierarchs, government officials and social scientists in an effort to learn from each other how the place and the witness of the Orthodox church remains in dialogue with the modern pluralistic world.