Address for the International Religious Freedom Summit, 2021 “The Rising Tide of Religious Nationalism” 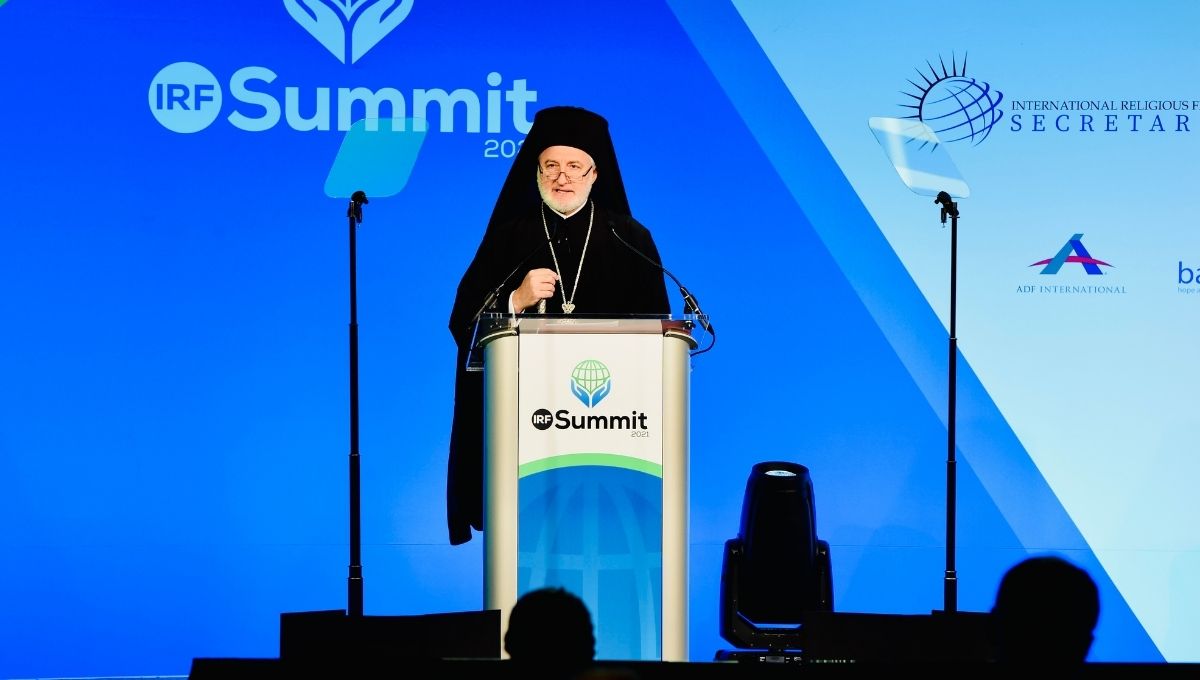 “The Rising Tide of Religious Nationalism”

It is a great privilege to be with you today, and I want to express the appreciation of the Greek Orthodox Church of America – a province of the Ecumenical Patriarchate of Constantinople, the Mother Church of Eastern Christianity – for the exceptional work of the International Religious Freedom Summits. The partner and supporting entities bear witness to the inclusive and the comprehensive nature of the vision for human liberty and freedom of conscience we seek to enhance around the globe.

I shall commence the subject of my remarks, with the following observation. “Religious Nationalism” is only one side of the coin. There is also “Nationalistic Religion.”

Much like the terms “Caesaropapism” and “Papocaesarism,” that described the tensions between political and ecclesial autocracies of centuries past, the interests of the State and those who desire some form of “theocracy” are seldom aligned.

The shoreline where these rising tides appear is a very long one, with diverse landscapes. Here in the United States, we have witnessed – especially in recent years – how independent religious bodies with charismatic leaders are using the public, political sphere to advance their own agendas. This is a clear case of “Nationalistic Religion,” where identity politics are incorporated into a religious entity in order to advance a religious agenda. Should such a tide rise to an undue influence – either in the legislative, judicial, or executive branches of government, it would challenge the very idea of the First Amendment, and the non-establishment clause concerning religion.

On the other hand, we could look at some aspects of modern Iran, and find a distinct brand of “Religious Nationalism,” a full-blown attempt at theocracy by a seeming majority. But to see a spiritual basis for the State is to create a stratification of society along religious lines, a spiritual apartheid, if you will. The result is a monolithic society unyielding to diversity.

When you elevate one religion above all others, it is as if you decide there is only one path leading to the top of the mountain. But the truth is you simply cannot see the myriads of paths that lead to the same destination, because you are surrounded by boulders of prejudice that obscure your view.

Finally, there is a hybrid of the two, as in the case of the Russian Federation and the post-Soviet Russian Orthodox Church. The painful history of the Church under the communist regime came to a sudden and stunning halt with the fall of the Iron Curtain.

However, even as the Russian Federation morphed into its present form, the newly freed Russian Orthodox Church struggled to rebuild its place in society. Its cooperation and support of the State has been a way to regain its former glories. Yet, it is the state itself that has benefited from the “Religious Nationalism” created by the reborn Orthodox Church within its borders. Precisely because the Moscow Patriarchate maintains much of the contours of the old Soviet Union. The close relationship between the state Foreign Ministry and the Church Department of External Relations is well known.

Through the networks of the Moscow Patriarchate, the Russian Federation is able to exert influence in the new nation-states that emerged after the fall of the Iron Curtain. Ukraine is a case in point, where a local Orthodox Church was established, legally and canonically, by the Ecumenical Patriarchate, yet the Moscow Patriarchate continues to maintain its own entity. This is clearly in the interests of the Russian Federation which benefits as much, if not more, from its “Religious Nationalism” as the Church does from its “Nationalistic Religion.”

These few examples – painted in broad strokes – highlight the kinds of exigencies that we are facing. By promoting one religion above others, states create an oversized monolith in the public square that de facto (and sometimes de jure) excludes the citizenry who do not conform to that religious point of view.

For the religious entity, the material advantages of state-sponsorship should be far-outweighed by the cost to the ethical, moral, and spiritual core of the faith tradition – anyfaith tradition. To put it in specifically Christian terms: “For what shall it profit a man, if he shall gain the whole world, and lose his own soul?”[1] Throughout history, every religious body has had to face the choice of ‘rendering unto Caesar the things that are Caesar’s, and unto God the things that are God’s.’ [2]

So how do we overcome these tides that seem to inexorably rise over time?

First, we must confess that such monoliths are not consistent with a modern, pluralistic, and emergent world. Democracy still finds a way in the imagination of peoples who yearn for liberty. That is why the cultivation of indigenous democratic forms of government – not the imposition from without – is an answer for both the state and the religious culture. Because even a homogenous religious culture is dependent on the individual’s freedom, in order for faith to be genuine and not coercive.

Second, we can accept that the historical journeys of any people possess complex and complicated markers that, if respected, create seawalls that hold back the troubling and troublesome tides. Allow me to close with a recent and very relevant example from the nation of my birth.

Last year, in this very month of July, the most iconic edifice of Orthodox Christianity – the Hagia Sophia in modern Istanbul, had its status withdrawn and was re-converted into a mosque. This Church was the largest Church in the world in the first millennium of Christianity. The end of the Roman Empire in 1453 changed its use, as has happened throughout history to many religious edifices.

But when the Turkish state emerged a century ago, it was deemed that such a unique and potent symbol should emanate an inclusive message, one that served the interests of all the citizens. Thus, the Hagia Sophia became a museum. For the Orthodox Christian world, this was not the best solution, but it was a vision for a future that included the incredible historical journey of Anatolia, not just one phase of that journey. We see in this re-conversion how the tide rose. And we see in those that called this crisis out, the effort to stem the tide.

My fellow laborers in the field of human freedom and inclusivity, I have outlined only some of the shores against which the tides of “Religious Nationalism” and “Nationalistic Religion” are crashing. Our best seawalls are going to be built out of cooperative efforts to instill democracy and freedom of conscience around the globe. This Summit is a most significant building block in that wall, and I thank you for your attention today and for your service to this mission.