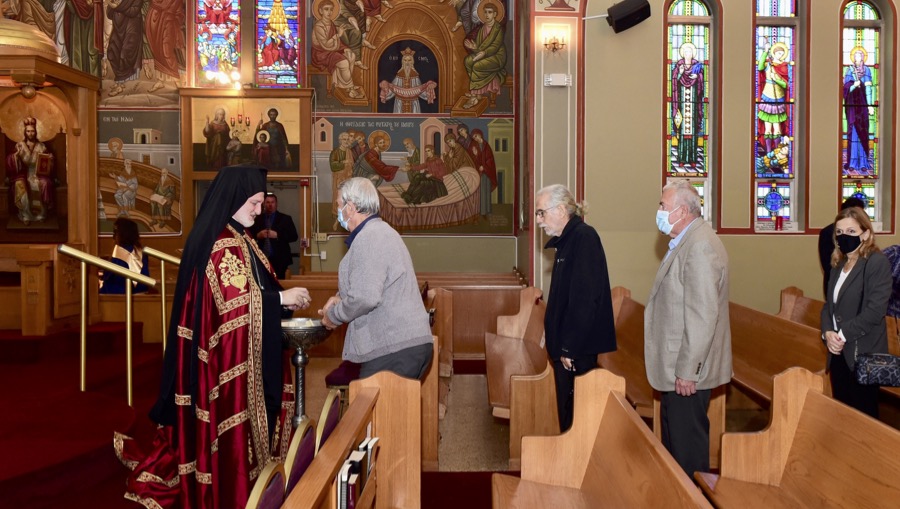 Imagine with me – just for a moment – that you had a cousin, no one obviously remarkable. And this cousin was your same age, maybe just a little younger. And imagine that you felt compelled to convey a message and a mission. You poured everything you had into meeting this challenge, and you were beginning to have some success and even followers.

And then this cousin of yours, whom you may have not seen, perhaps, in years, he arrives at one of your meetings where you are the acknowledged leader. And then you realize the truth. You must give way to him. He is the expected one. He is the reason for everything you have done.

If, my beloved friends, you can put yourself in this mindset for just a minute, then you have had a taste of what your Heavenly Patron and the Saint we celebrate today experienced two thousand years ago.

The Holy Forerunner and Prophet – Saint John the Baptist! What it must have been for him! In that moment that he finally saw his cousin for who He really was!

This is how the Forerunner himself describes the experience to others after he had baptized the Lord:

“He is the one of whom I said, ‘The One Who comes after me is before me, because He was before me.’  Yet, I did not recognize him! Still, this was the reason I came baptizing with water, so that He would be revealed to Israel. I saw the Spirit descending like a dove from the sky, abiding upon Him,”— and still, I did not know him! But the One who sent me to baptize with water said to me, ‘If ever you see the Spirit descend upon someone and abide with him, that is the One Who baptizes with the Holy Spirit.’ And I did see, and I did testify, that This Man is the Son of God!”[*]

Can you imagine, my friends? John saw his cousin, Jesus – for their mothers, Elizabeth and Mary were cousins – and he thought he knew him, but there was so much more to know.

We might say it was kind of a case of mistaken identity. John looked at Jesus and only saw his relative. His mission – to reveal the Messiah to Israel and prepare the way of the Lord – was the sum and substance of his entire life.

But when the Messiah arrived, in the form of his humble, yet Divine Cousin, John was amazed and could hardly believe his eyes.

I have to say – this is how we are so often with the people in our lives.

Like the John the Baptist, we are engaged in our own lives, on our individual missions. Perhaps we think we know what God has yet to reveal to us. And yet, we do not yet recognize Christ in every person that we meet, for as the Lord said:

A beautiful thing about John the Baptist was his unflinching honesty and searching humility. When he realized who his Cousin really was, he said:

He must increase, and I must decrease. [‡]

Would that we all would recognize Christ in each other!

In the stranger, the foreigner, the old, the young, the men and the women, in those who love us and in those who hate us. It is not an easy thing to do.

Just consider how hard it was for the Baptist to see in his cousin from Nazareth, the Son of God! But like Saint John, we are each called by God to see His children in every human face.

May we all aspire to this high calling, through the prayers of the Glorious Prophet, Forerunner and Baptist John!