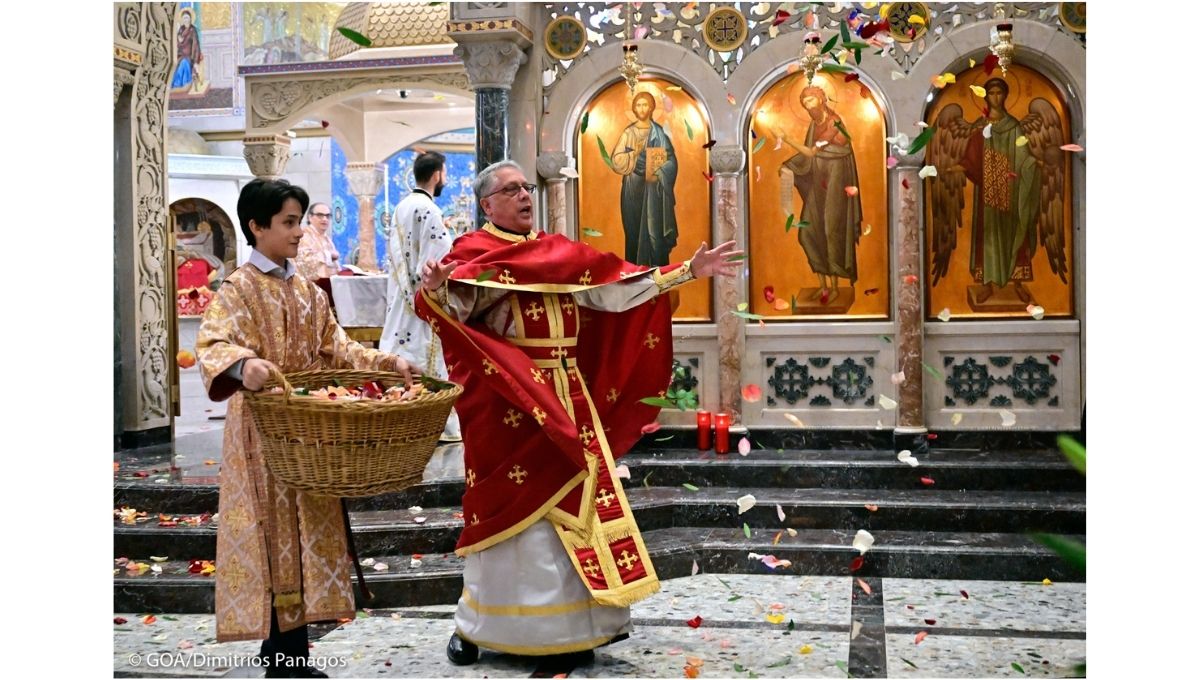 At the Vesperal Divine Liturgy on Holy and Great Saturday

Today, the Church keeps a deep silence on this Sabbath of Sabbaths – a pause from all worldly cares and concerns. The Lord, Who is the Creator of all that exists, has ceased from His Labors. And these labors are not those spoken of in the Book of Genesis, which instituted the Seventh Day of the Week as the Day of Rest. Instead, these labors are the work of His Divine Plan for our Salvation, which He accomplished in His Flesh.

First, by His Divine Incarnation in the womb of Panagia. Then, by His Holy Nativity, His Circumcision in the Law of Moses, and His perfect childhood and adulthood, in obedience to His Holy Mother and earthly father. Then, by His Baptism, in which He fulfilled all righteousness.1 Then, by His victory over the Devil’s temptations. Then, by cleansing the Temple of animal sacrifice. Then, by His teaching, preaching, miracles and signs.

And finally, by freely and willingly giving up His life for the life of the world. As we recited yesterday on Holy Friday: enduring the spitting, the blows with the palm of the hand, the buffeting, the mockery, the reviling, the wearing of the purple robe, the reed, the sponge, the vinegar, the nailing, the lance and, above all, the Crucifixion and Death. All of these comprise the labors of the Lord’s Divine Plan of Salvation – or Oeconomia, as we say in Greek.

It says in Genesis that God created the visible and invisible Universe in Six Days. In the case of our Lord Jesus Christ’s re-creation of our humanity, every second of His three decades upon earth counted for some redemptive aspect for each and every one of us. No temptation was not faced. No challenge was not met. And no pain was not endured.

But it was on the Sixth Day of the Week, Friday, the Day of Preparation (Παρασκευή in Greek) – the day when Genesis says that humankind was created – that the Lord chose to mount the Cross and undo the consequences of disobedience and sin. Using His Divine Flesh like parchment and His Precious Blood like ink, He nailed the handwriting of our sins to the Cross. And thereby He destroyed death by death, as we shall soon sing.2 What a marvel! In one Day upon the Cross, He unwinds all the sin of the world ever committed, or ever to be committed. And then, having accomplished this labor of love, He takes His rest in the Great Sabbath.

Indeed, the Lord of Glory rests in His Flesh within the Tomb, but His creative and re-creative power advances in His soul to the very gates of Hell. While we keep silence over His Precious Body – in awe of His sacrifice – the Lord descends into the nether world to harrow Hadës. There, He despoils it of all the souls who were trapped there from all eternity, because we cannot overcome the power of death by ourselves. We are able to rise from the dead, but only by the command of the One Who called forth Lazarus from the grave. And only in the same way – when we heed the call of the Lord to follow Him and walk in the newness of life3 – can we rise from the works of death: hatred, greed, malevolence, selfishness, violence and the rest of the afflictions of this world.

My beloved sisters and brothers in Christ,

Therefore, on this Sabbath of Sabbaths, let us observe silence and interior stillness in the presence of the profound mystery of our Lord in the Tomb. And let us listen for the voice that will proclaim His Rising from the Tomb and His triumph over sin, death and Hadës. Amen! Καλή Ἀνάσταση!