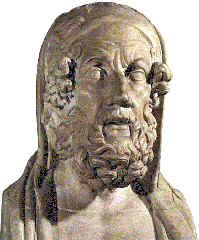 However, we often tend to forget that these epic poems, originally  developed by Sumerians and then by Ancient Greeks three thousand years ago, were not originally written, but spoken. They were stories transmitted orally by traveling poets who had the creativity and the good memory to be able to sing thousands of lines and dozens of stories.

In this Webquest your task will be to understand what an oral poem looks like and then compose your own poem or story, which you can perform in front of your classmates. If you have the time, the class can also pick a theme (like the Trojan War) and compose poems or stories around that theme.

The first step is for you to get some information about oral narratives as they have been developed in many cultures throughout the centuries:

What do you think all these oral narratives have in common? If you think that they were meant to be performed by traveling poets, what skills do you think the poet should have to be able to capture the audience?

The next step in this process is for you to read about Homer and his major works, the Iliad and the Odyssey. Most scholars now agree that Homer, who has been celebrated as the first literary genius for hundreds of years, may have been only the person who collected these oral narratives and turned them into "books." First look at a nice site on the Iliad and the Odyssey created by some high-school students. For the complete texts of these two major epics see Homer's Odyssey and Homer's Iliad so that you can get a feeling of how long and complex they are. A more in-depth analysis of two passages from the Iliad and the Odyssey is offered through a course page from Harvard University. After you read excerpts from these epic poems, look at some images which reveal the context in which these poems were "read" or "performed" by traveling poets. Click on all the links to see these images here).

The last step in the process asks you to begin thinking about the oral narrative that you will have to perform for your class. Now you have to read about some of the characteristics of oral narratives namely patterns and motifs which are meant to be heard rather than read.  You can also read about the use of meter, which in this case is the Homeric dactylic hexameter, and decide on the meter you would like your oral narrative to have. Let this be your opportunity, as a traveling poet, to tell a story using the strategies that poets have used since Homeric times.

Traveling poet: You completed all the requirements of the process and were able to develop an engaging oral narrative based on the principles discussed. You are ready to go out into the world and perform your stories.

In-house poet: You have a good understanding of what oral narratives are and their characteristics, but it is still difficult for you to come up with stories and perform them. For now, it is best if you keep on re-working these ideas.

Audience: You clearly enjoy oral narratives, but being on the spotlight to perform your stories is not one of your major strengths.

I hope you enjoyed this exploration into the Homeric Oral tradition and you are now able to appreciate the Iliad and the Odyssey much more. Keep on working on your own stories!

Developed by Dr. Andreas Karatsolis for the Department of Greek Education of the Greek Orthodox Archdiocese of America