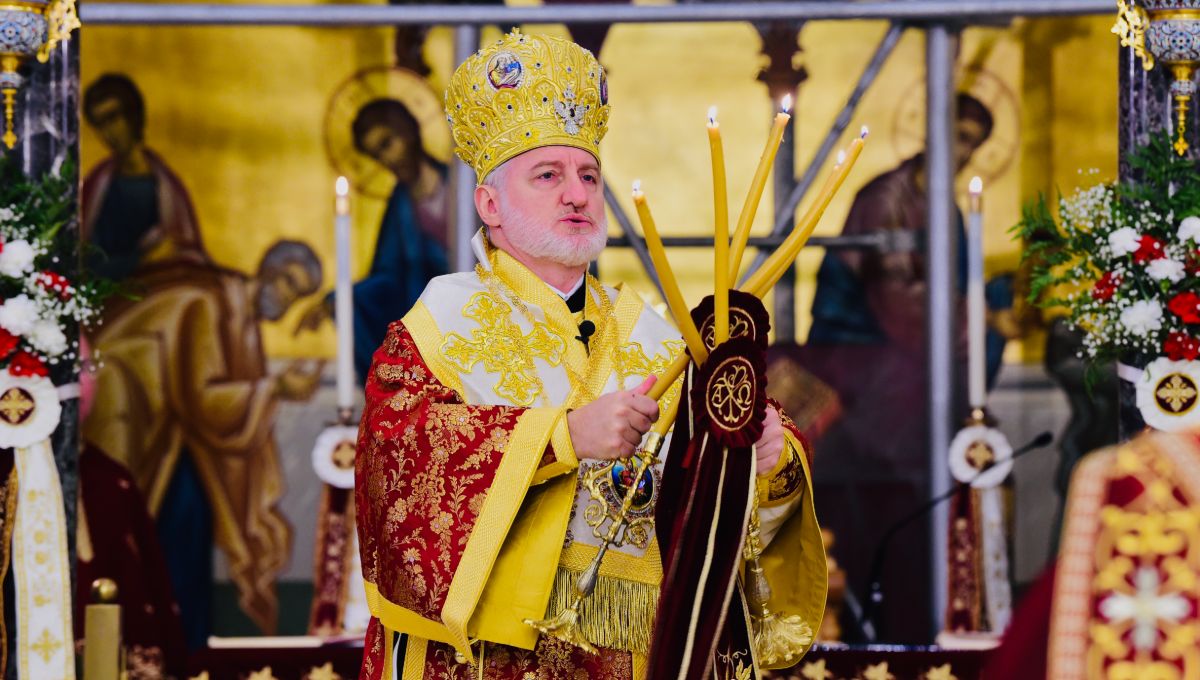 I am very pleased to be with you for the Divine Service, especially on this Eve of the Feast of your Patron Saint, the Holy Great-Martyr and Myrrh-Streamer Demetrios. This mighty captain of men became an Angelic General through his bravery in the spiritual combat of his martyrdom.

Our military saints are always a challenge for the Church, for as the Lord said: “Those who live by the sword, die by the sword.”[*] Violence – in any form, should never be a solution for the Church; yet violence is the necessary element of all war. Our exemplary Saints, like Demetrios, were people of their times, who served with honor. But when their military service conflicted with their faith, they laid down their arms – their swords and spears – to take up the Cross of Christ.

In this morning’s Epistle, we hear of violence in this confession of Saint Paul:

For you have heard of my former life in Judaism, how I persecuted the Church of God violently and tried to destroy it.[†]

But Paul goes on speak of how God “revealed His Son in me” - ἀποκαλύψαι τὸν υἱὸν αὐτοῦ ἐν ἐμοί[‡] – and this was how he became the great Saint and Apostle whom we venerate today. And so it was for the Great Demetrios; God revealed in him His Son, our Lord Jesus Christ. God revealed faith, hope, love, compassion, mercy in the life, and in the death of this Saint and Patron of Thessaloniki.

For the love of his Lord, Demetrios exchanged the battles for this world with the battle for Heaven. He gave up conquest in the fields of war by conquering his own heart with true ἀγάπη. He left behind the seeming glories of combat for the everlasting glory of Heaven. And the only trophy – τρόπαιον, that he treasured above all others was the Cross of his Savior Christ.

We see in Saint Demetrios the Champion of the Lord, who wins victory not by conquering others, but by conquering himself. And as a victor over the devil, over the world, and ultimately over himself, he was able to bring strength and courage to others. As his hymn, which we all know so well, says:

in the stadium you emboldened Nestor….[§]

Thus the Saint was revealed as a Myrrh-Streamer, so that even in death he would be the one who continually conveys the grace and gifts of God. He remains an angelic General of τάγματα τῶν Ἁγίων – the ranks of the Saints, whom he leads in intercessions on our behalf.

Therefore, my beloved Christians, let us put away all violence of emotion, of mental opinion and prejudice, and the destructive feelings that hurt the Church.

When we judge others, when we are envious of others, when jealousy and anger prevail in our hearts, then we persecute the Church, for we are the Body of Christ.

When we hold grudges against those who might have wronged us, or bear resentment against our own community, this is the war of the devil against the Church.

We must ask ourselves a serious question: “Whose side are we on?” Are we to be counted in the army of the Lord, where Saint Demetrios is our General?

Our spiritual battles are won in our hearts and spirits, where through the Weapon of Peace – the Invincible Cross – we overcome all enemies of self and other through love. This is the revelation of the Son of God in us. For, when we sacrifice our own wills, our own desires, and give up the negative emotions because “the love of God is shed abroad in our hearts by the Holy Spirit,” [**] then we are transformed into the persons that God always intended us to be.

My beloved in Christ,

Through the prayers of the Holy Great-Martyr and Myrrh-Streamer Demetrios, may we receive the grace to stand firm in the heavenly army, embrace the Cross, and live the life of love.

[§] Apolytikion of the Saint.