New York, June 30, 2020—The Hellenic Film Society USA (HFS) announced the first-ever virtual Greek film festival in the US, to be held July 10-20, 2020. Audiences across the country will have the opportunity to stream ten quality, entertaining Greek films to their devices throughout the US. For many of the films, it will be their US premiere. In addition, virtual interviews with directors of the films are also planned.

Until this year, HFS presented the New York Greek Film Expo film festival in the spring in movie theaters in New York City and Long Island. When New York theaters closed in March due to the COVID-19 pandemic, the Society explored other options for presenting Greek films to its loyal audiences and decided on a virtual film festival.

“We are thrilled to present these fine films on demand, at a time when people are looking for ways to be entertained safely,” says Jimmy DeMetro, HFS President. “We believe that watching a film in a movie theater is the best viewing experience, but we are proud to be breaking new ground. Going virtual gives us the opportunity to reach a national audience for the first time. We have a great line-up of award-winning films from Costa-Gavras’ latest to a classic comedy starring Aliki Vougiouklaki.”

For further information about the Greek Film Expo on Demand or to purchase tickets, please visit https://hellenicfilmusa.org/ or call 646-844-1488. 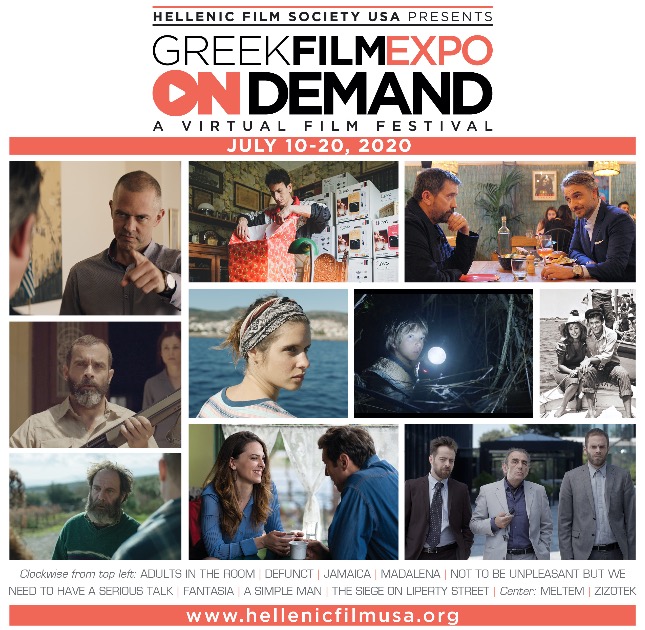 About the Hellenic Film Society USA

The Hellenic Film Society USA (HFS) is a 501(c)(3) non-profit organization rooted in the belief that Greek cinema can and should be part of the American cultural landscape. The organization presents high-quality, well-crafted feature films, documentaries, and film shorts made by Greek filmmakers and those of Greek descent, as well as films that depict the rich culture and history of Greece and Cyprus. HFS presents the annual New York Greek Film Expo film festival every spring. They also present Always on Sunday, a series of monthly Greek film screenings, at the Museum of the Moving Image in Astoria, NY, as well interviews with filmmakers and panel discussions about filmmaking that inform, enlighten, and inspire audiences of all nationalities.

The Stavros Niarchos Foundation is the lead supporter of the Hellenic Film Society USA.  The Greek Film Expo on Demand is made possible in part with support from the Onassis Foundation USA, the Kallinikeion Foundation, and the Queens Council on the Arts with public funds from the New York City Department of Cultural Affairs in partnership with the City Council. For additional information, please visit www.hellenicfilmusa.org or call 646-844-1488.

Following is the 2020 feature film lineup:

ADULTS IN THE ROOM, directed by Costa-Gavras

This riveting political drama focuses on the confrontational financial bailout negotiations between Greece’s finance minister and the EU. From board rooms to back rooms, master filmmaker Costa-Gavras deftly exposes the arrogance and hypocrisy of the political elite.

Aris leaves his yuppie downtown lifestyle behind and moves into his late grandfather’s home in an Athens suburb. Before long, he discovers a family secret that will forever change the way he looks at life. Winner, Best Picture, Thessaloniki International Film Festival, 2019.

This musical drama captures the sometimes-seedy atmosphere of the 1990s night club scene as it follows a talented young singer’s rise to stardom and the toll it takes on her personal life.

In this comedy classic, a young woman fights tradition—and the odds—when she takes control of her late father's fishing boat in order to support her siblings. Digitally restored for its 60th anniversary, this award-winning film glitters again with its striking black and white cinematography.

A young French woman of Greek descent travels to the island of Lesbos to sell her mother’s house and put her Greek past behind her. A chance encounter with a young Syrian refugee sets the trip on a different course. This film is mostly in French with English subtitles.

NOT TO BE UNPLEASANT BUT WE NEED TO HAVE A SERIOUS TALK, directed by Giorgos Georgopoulos

In this droll black comedy, a young womanizer discovers that he is carrying a sexually transmitted disease and must track down his former partners in hopes of finding the one with the first viral strain. Best Screenplay, Hellenic Film Academy Award 2020 | Best Greek Film, Thessaloniki International Film Festival 2019.

Near the buffer zone dividing the city of Nicosia, a desperate father crushed by economic austerity, fights to keep his family’s home from being repossessed. Winner of five Best Picture awards, including FIPRESCI Prize (International Federation of Film Critics) | Thessaloniki International Film Festival 2019.

A young boy abandoned by his mother at a country fair takes refuge in the isolated cabin of a mute loner. Gradually the two outcasts form a family, something both have lacked for some time. Variety calls it “riveting”, “moving and subtly bewitching.” Winner of Best Cinematography, Hellenic Film Academy Award 2020.