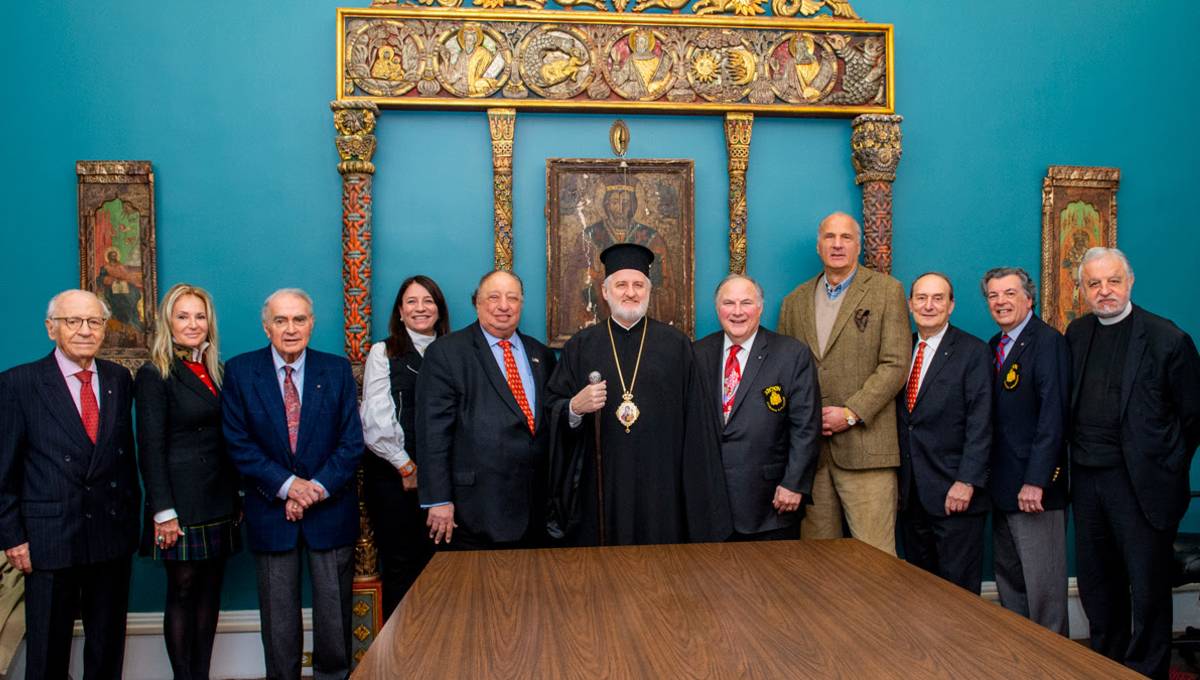 Opening the first meeting of the New Year in prayer and with inspiring introductory remarks by His Eminence Archbishop Elpidophoros of America, the meeting of the Ecumenical Patriarch Bartholomew Foundation for the Sacred See of Saint Andrew met on Saturday, February 6, 2021, via Zoom.

In his opening remarks, His Eminence stated: “I want to offer my deep and abiding gratitude to the Order of Saint Andrew, and particularly to the Archon Commander, Dr. Limberakis, for making this next-generation platform to enhance the work of our Mother Church of Constantinople possible. I know that it has been the dream of His All-Holiness for many years, and the fact that it has come together to honor his Thirtieth Anniversary on the Throne of Saint Chrysostom makes it very special indeed.”

To listen to the entire introductory remarks click here

As part of the program to achieve financial independence, the Chair of the Communications Committee, Aphrodite Skeadas, assisted by Archon John Mindala and volunteer George Orfanakos, in coordination with the Development Committee led by Father Alex Karloutsos, is establishing very ambitious and innovative initiatives in support of the various giving programs. The efforts will include print and electronic media and reaching out to the various social networks, all in an effort to maintain the broadest base of supporters among all ministries, organizations and the Faithful to ensure the continued success of the Foundation and secure the financial foundation of the Ecumenical Patriarchate.

In addition to the Order of St. Andrew, under the guidance of Archbishop Elpidophoros of America and the Holy Eparchial Synod, Philoptochos, Leadership 100 and the 800+ parishes of the Greek Orthodox Archdiocese, the Carpatho-Russian Diocese of the USA and the Ukrainian Orthodox Church of the USA will be engaged. A presentation to the Holy Eparchial Synod and the Metropolitans of the GOA will take place at the invitation of the Archbishop, the presiding officer of the Synod. Also, Fr. Karloutsos announced that plans were in formation to hold a Founders’ Dinner on Friday, October 29, 2021 in New York City in conjunction with the visitation of His All-Holiness Ecumenical Patriarch to the United States and the Thyranoixia of St. Nicholas National Shrine.

Although the fundraising effort has not formally been launched, 15 Orthodox faithful have already pledged at least $100,000, payable over 10 years, to become Founding Members of the Bartholomew Foundation, including four new Founding Members: Maria Allwin; Michael and Katherine Johnson; Dr. Gregory and Stellee Papadeas and Theodore J. and Anne Theophilos. They join the other Founding Members, who include the Nicholas J. and Anna K. Bouras Foundation; Thomas and Elizabeth Cappas; John and Margo Catsimatidis; Stephen and Arete Cherpelis; William and Elizabeth Doucas; Drs. Anthony and Maria Limberakis; Dean and Linda Poll; Michael and Robin Psaros; George E. Safiol; Peter and Aphrodite Skeadas; and Steve E. and Frosene Zeis. The Foundation welcomes all levels of giving in the spirit of Christian Stewardship.