The task of this Archdiocesan Department is to further develop and coordinate the philanthropic work of the Greek Orthodox Archdiocese of America. Working closely with various community organizations, most especially the Ladies Philoptochos Society and IOCC, this Department coordinates on a national level the philanthropic work of the Church. Responding to the apostolic exhortations that “our love may abound more and more, with deep knowledge and discernment” (Philippians 1:9) and that “faith without works is dead” (James 2:26), this office seeks to motivate all communicants, men and women, young and old, to be more philanthropic in their outlook. The Department of Philanthropy is concerned with promoting philanthropy in its original and purest expression i. e., “love for one’s fellow man”, love expressed in thought, word, and deed, cognizant of the fact that God is love.

In 2006, the Department assumed responsibility for the Benevolence Fund for Retired Clergy and Widowed Presvyteres and has so far collected and distributed over $600,000 in monthly stipends to retired priests and widowed presvyteres with meagerretirement incomes.

Moreover, this office strives to heighten sensitivity within parishes, Church-affiliated organizations and the faithful of the Archdiocese to those members of the community with special needs so that there is outreach to them and inclusion within the life of the parishes.  These include people who are blind, physically handicapped, mentally challenged, afflicted with debilitating diseases, elderly facing problems because of their advanced age, those suffering from terminal illnesses, and countless others.  It is the intent of the office to facilitate as much as possible their participation in the salvific life of the Church. 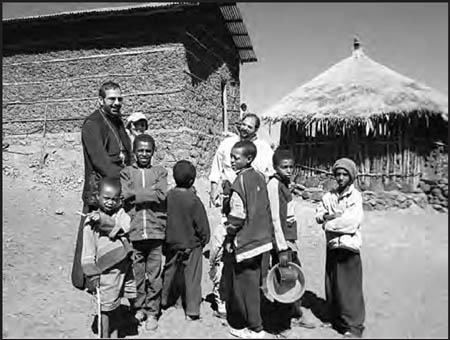 Bishop Andonios and IOCC Director and CEO Constantine Triantafilou during a summer visit to Ethiopia where the IOCC has built a new clinic. 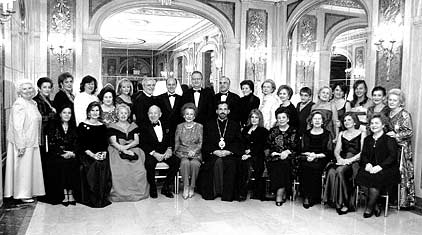 The annual Chrysanthemum Ball of the Archdiocesan Cathedral of the Holy Trinity has for the last 50 years ensured the distribution of thousands of dollars to local, national and international philanthropies. This year’s honorees were Dr. and Mrs. James Nicholas, shown with Bishop Andonios of Phasiane, Father and Mrs. Robert Stephanopoulos, Cathedral Dean; Ambassador of Greece and Mrs. George Savvaides, Consul General of Greece and Mrs. Dimitris Platis, Consul General of Cyprus and Mrs. Vaseleios Philippou, National Philoptochos President Georgia Skeadas, Cathedral Philoptochos President Mary Christy and members of the Board and committee.