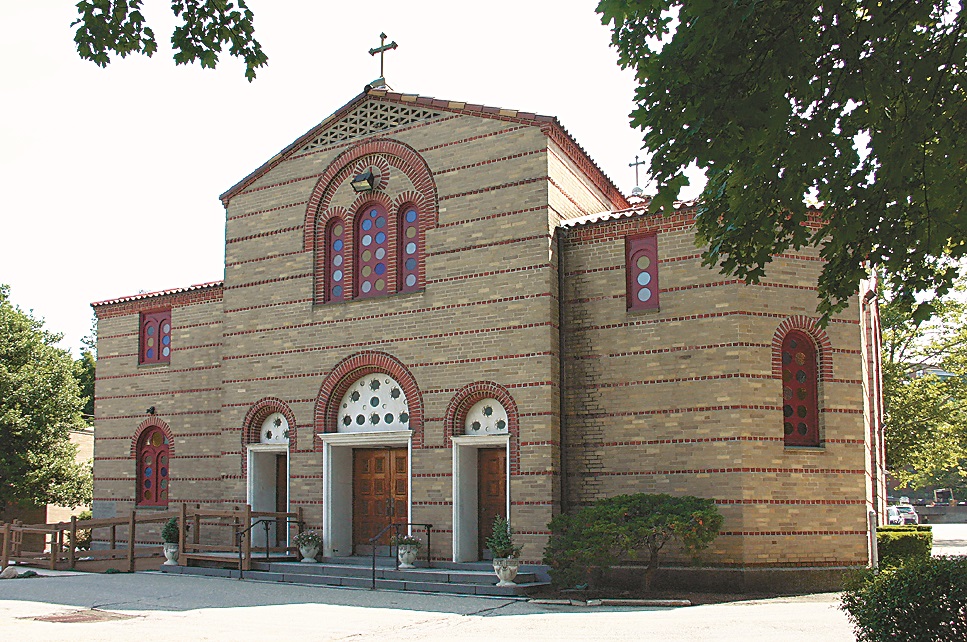 STAMFORD, Conn. – Christian education and spiritual renewal receive great emphasis at Archangels Church. Since arriving at the parish in 2009, Fr. Pappas has established a Christian education program for adults, along with giving great attention to sermons, Bible study, adult catechism, pre-marital and pre-baptism classes and inviting outside speakers for special events and retreats.

“We’re striving for the spiritual renewal of all the community, including through our youth ministry programs,” said Fr. Pappas.

He said his ministry is focused on “developing a fuller relationship with the people to help guide them in a deeper Christian life.”

Fr Pappas also has developed a missionary program. A few years ago, several parishioners went on a mission to Guatemala. He is actively encouraging teens from the church to participate in Project Mexico.

The priest said the community “took a major step forward” this year with the hiring of a full-time pastoral assistant, new HCHC graduate Steve Sarigianis.

His duties include coordinating all youth ministry programs and the altar boys, sexton and chanters, and administrative and pastoral work.

Another key person in parish ministry is Presvytera Kerry, also a graduate of HCHC (Master of Arts in Church Service, 1981), who works full-time as a staff member of the Archdiocese Center for Family Care, specializing in clergy marriage and family issues.

In the church, she does the English chanting during the Divine Liturgy, does pre-marital preparation counseling for couples and performs other duties in the community.

For the past 40 years, the office administrator has been Jane Zorvis, who keeps the day-to-day operation of the parish running smoothly and performs a variety of duties.

In the early 1920s, the Greek Orthodox community worshipped at Evangelismos (Annunciation) Church, the first to be established in Stamford, until the controversy erupted over switching from the Julian Calendar to the Gregorian Calendar.

Parishioners who favored adopting the “new” calendar broke away and founded “Taxiarchae” (Archangels) Church. For 29 years, they worshiped in an old Roman Catholic Church the community purchased and remodeled into an Orthodox church.

Then, in 1956, along came a young priest, Fr. George Poulos (Dimitrakopoulos), and began his studies at Holy Cross in Pomfret, Conn., then made the transition to Brookline, Mass. He was to become the longest serving priest in the parish. He is also the author of the “Orthodox Saints” series of books, biographies of Archbishop Iakovos and Bishop Athenagoras Cavadas, a history of the seminary in Pomfret, Conn., and is a founder of Ionian Village.

Under Fr. Poulos’ leadership, the parish embarked on a project to acquire a four acre site and build the present Byzantine-style church, at a cost of $375,000.

Several wealthy shipowners who were members of the community donated generously toward the building of the church.

Built by architect W. Stuart Thompson of Greenwich, Conn., it was the first church that Archbishop Iakovos consecrated, in 1959.

Eventually the present complex came into being. By 1970, the parish built its $5 million cultural center on the property, located on the north side of downtown Stamford, a city of about 123,000 and home to four Fortune 100 companies and numer- ous other corporations.

The 40,000 square foot complex later was transformed into an athletic center.

The project also included an adjoining building to the church that houses the Sunday school and Greek school classrooms, a library, reception hall, kitchen and other features.

Much of the funding for these building projects came from major benefactors Capt. Nicholas E. and Michael Kulukundis and Pericles Callimanopulos.

The parish has a strong youth program, with athletics involving many of the GOYA members.

Fr. Pappas cites as a major challenge he faces is “Rebuilding the community; both spiritually and in terms of physical plant; to take care of deferred maintenance. We have a responsibility to maintain and renew this complex for the next generation.” A capital campaign provides seed money to accomplish these goals.

He continued, "Inside that challenge; we have to continue building on the wonderful accomplishments of Fr. Poulos, and the parish leadership he worked with.” Administratively, the parish has added a half time office assistant, and automated record keeping, including all financial records.

Archangels parish converted from dues to stewardship in 2010. “As a result, we have seen a substantial increase in giving of time and talent as well as financial contri- butions,” Fr. Pappas said, adding, “We are now launching a capital campaign for $2.2 million for the remodeling of the complex.

A second revenue source is the annual “GreekFest” that takes place the last weekend in September.

“I feel very, very blessed to be here as pastor and to work with the people,” Fr. Pappas said in conclusion. “We’re seeing a steady stream of young families moving to area and making the connection to our church.”