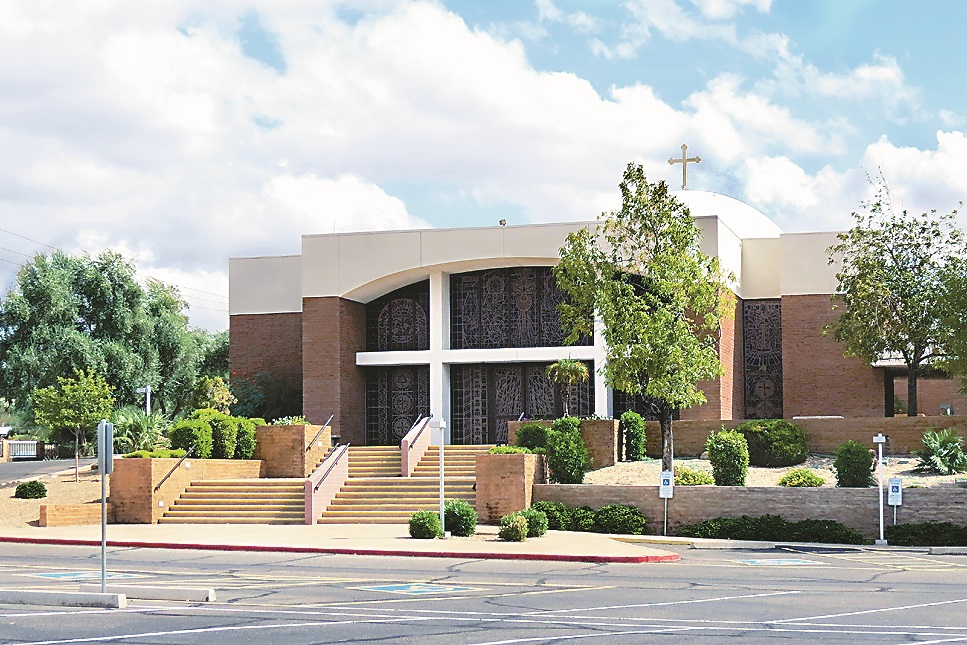 PHOENIX – Holy Trinity parish has come a long way from its 1920s beginnings when Arizona had been a state for less than 10 years and the capital of Arizona was still a frontier town.

Ten Greek businessmen decided to form a community. Greeks came from many places in Greece, especially Epirus and the Peloponnesus.

The 10 each donated $50 to obtain a charter from the state of Arizona.

The parish is now in its third and fourth generation and includes converts through marriage.

According to a parish history, it was fall 1929 when the founding families held their first general assembly and voted to buy property near downtown.

Supply priests from Los Angeles, the closest large city, would come to hold services in those early years. It was a long trip in a Model T Ford in those days. Now it takes only four hours by car.

On Oct. 31, 1930 the groundbreaking ceremony for the Hellenic Orthodox Church community house took place and the first Divine Liturgy was celebrated on March 25, 1931 by a visiting Los Angeles priest, Fr. Sardounis.

The long-held dream of a religious and social center for the American families of Greek ancestry in Phoenix that had been in the making for over two decades had finally become a reality.

The 1930’s in America were marked by the economic distress of the Great Depression.

Consequently, the Holy Trinity community in Phoenix was faced with what was then a substantial debt.

The years 1937 to 1941 were dark times of financial instability for the Holy Trinity community.

The Church was lost in 1937 and reacquired in 1941, when they resumed their spiritual, social and educational activities at 333 East Virginia.

From 1945 to 1949 the leaders and members of the community joined forces to build a new church, which was attached to the west end of the existing building.

The new church was consecrated on Feb. 22, 1951, by Bishop Athenagoras of Los Angeles.

The space that had been the church proper since 1931 was converted back to the community house, known as the “big hall” and “little hall.”

The newly built parish house was completed in 1953 on the Church property.

The new Hellenic Orthodox Church of Phoenix was larger and more accommodating than the old one and provided for numerous weddings, baptisms, and funerals, in addition to the weekly Divine Liturgy and holiday services.

In 1962 a separate single story classroom building was constructed on church property.

As the parish grew, the church facilities had to be expanded and a 17 1⁄2-acre site on Maryland Avenue that serves the community today was purchased in mid-March 1972.

Construction began in phases, with the community center being completed by New Year’s 1973.

The center served as a temporary site for Church services.

Phase II began with groundbreaking for the church, Feb. 16, 1975, with Archbishop Iakovos officiating at the ceremonies.

On Palm Sunday, April 18, 1976, church services began in the new church. Holy Trinity contains the largest installation of faceted glass in the southwestern United States and combines the architectural simplicity and flavor of the Arizona desert with deeply rooted Byzantine traditions.

Holy Trinity is fondly referred to as “the Desert Cathedral” or “the Jewel in the Desert.”

Phase III, the construction of the education and office building including the library was completed in September 1982, along with St. George Chapel.

Archbishop Iakovos consecrated the church Feb. 27, 1983, with the participation of Metropolitan Silas of New Jersey, Bishop Anthony of San Francisco, and Bishop Anthimos of Boston. John P. Trebellas of Champagne, Ill., and Sun City West, Arizona, chosen by lot from among 52 godparents, was the representative godparent and unlocked the door of the church.

Fr. Hill, who was ordained in Omaha, Neb., in 2001 after years of training under Metropolitan Isaiah of Denver. He had previously served as youth director in the Antiochian Archdiocese.

Upon begin ordained in the Greek Orthodox Archdiocese, he was first assigned as assistant priest and served under his predecessor, Fr. James Paris, until becoming dean in 2012.

Assisting Fr. Hill on Sundays is Deacon Thrasher, who has a lay profession. The contemporary community has a strong youth program and emphasison religious education. Sunday school enrollment is about 125 children. Greek school has about 20.

Youth ministries and organizations range from toddler to college age.

Phoenix has a great diversity of Orthodox Christians, with the Antiochian, Romanian, Serbian, Russian and Ethiopian groups represented.

The various churches come together for Pan Orthodox events during the year.

Parish ministries include working with International Orthodox Christian Charities, and assisting the homeless in downtown Phoenix with a FOCUS ministry group.

“We do quite a bit of outreach,” Fr. Hill noted. He describes his ministry as “serving as a bridge between older generation of Greeks and their grandchildren.” He tries to reach out to both groups.

His ministry also includes producing three CDs of Byzantine chant, and providing homilies that can be heard on Ancient Faith Radio.

His CD’s are available at Liturgica.com and at the Holy Cross Book Store. Financially, Holy Trinity is a stewardship parish, with the annual Greek festival supplementing revenues.