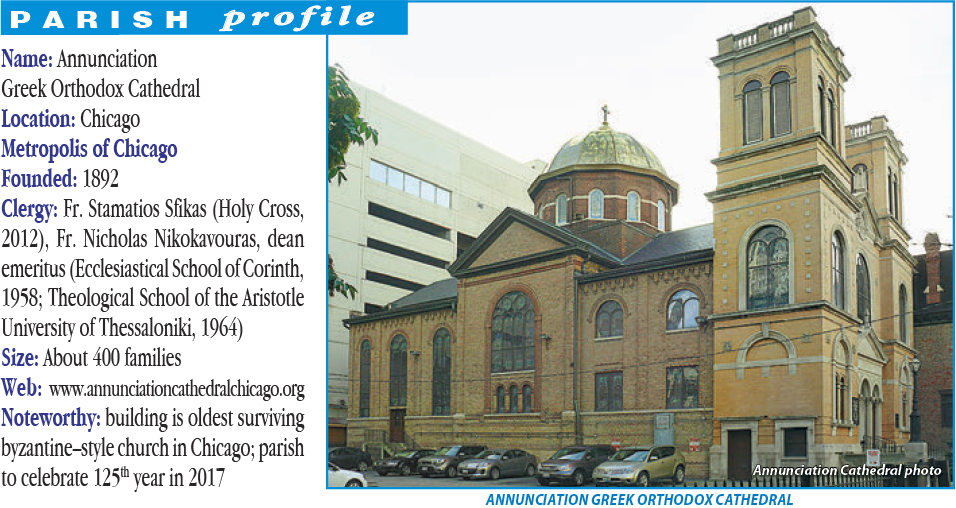 CHICAGO – Annunciation Cathedral might be considered part of the “class of ’92.” That’s 1892, the year of its founding and that of Holy Trinity Cathedral and Annunciation Church in New York. Located near downtown Chicago, the cathedral not only ministers to its core membership of 400 families, but also receives continuous visits from Orthodox Christians from throughout the country coming to Chicago on business and general visits, Fr. Sfikas noted. “We’re always ministering to people even though they are not parishioners,” he said.

The parish as many first-generation Greek Americans and many immigrants from Greece who arrived in the 1950s and ‘60s. There are traditional business people such as restaurant owners, as well as many in many professions. Annunciation has a Sunday school but no Greek school. When part of the congregation formed St. Demetrios Church in the late 1930s, and subsequently formed a separate parish in 1983, the Greek school moved to the new community.

Among the cathedral’s special ministries is the “Mommy and Me” program for mothers with newborns to toddlers up to age 5. The mothers gather for activities once a month. Though there are not that many school–age, or GOYA children, “Because we’re located in the downtown area, it’s very expensive to live in the center city,” said Fr. Sfikas. A lot of families with younger kids then move.” There is a family night that takes place every two months where participants have dinner and participate in various programs and projects.

The cathedral serves as the host parish for the local Feed the Hungry Program that ministers to the needy in the center city. About 35 young adults are involved in other outreach ministries For about half the year, Fr. Nicholas Nikokavrouas, the former priest and dean emeritus, assists Fr. Sfikas with the various ministries and programs. He spends the other six months over the summer in Greece.

The largest source of income, outside of stewardship, for the cathedral comes from the annual Greek festival held the last weekend in June. Another fund-raising source is the Cathedral Ball that takes place in the winter.

According to a parish history, Annunciation Cathedral was established in 1892 by a group of people who had emigrated from Laconia and some of the Greek islands. The community first rented a hall on Randolph near Union Street and asked the Holy Synod of Athens for a priest. Fr. Panagiotis of Ithaca was signed as the first priest and in March of 1892 the first Divine Liturgy was celebrated. The Greek community later rented a Masonic Temple on Kinzie near Clark, a more suitable location for worship.

1893 saw the first archieratical liturgy celebrated at the church when Bishop Dionysios Latas from Zakinthos visited America as a representative to the World’s Columbian Exposition. After Fr. Phiambolis in 1899, two other priests continued to serve the Annunciation, Fr. Nectarios Mavrokordatos and Fr. Theodoros Prousianos. In 1909 the community purchased the lot on which the Cathedral stands today from the estate of Dr. Edward Charles Henrotin at a cost of $18,000. 1910 saw the completion of the Cathedral at an estimated cost of $100,000. It was modeled after a Cathedral in Athens and today stands as the oldest surviving building in Chicago constructed as a Byzantine church.

In those years the Annunciation church was served by Fr. Constantinos Nicoletopoulos and was succeeded by Frs. Hariton Panagopoulos and Constantinos Hadzidemietriou. In 1927, under the spiritual leadership of Fr. Niketas Kesses, the community purchased land on the north side of Chicago to build the Solon Greek School and a chapel which was dedicated to St. Demetrios. Gradually this small chapel became the St. Demetrios Church which is still found at 2727 W. Winona. Fr. Niketas Kesses served the church with great zeal and dedication for 44 years.

During the Great Depression the community rallied to save the churches and massive fundraising activities were inaugurated to reduce the burdensome indebtedness. Also in 1930, due to the widening of La Salle Boulevard, the entire church building was lifted off its foundation and moved back. The parish hosted the fifth Biennial Clergy–Laity Congress in October 1933. In 1940 the two churches were renamed the United Greek Orthodox Churches of Chicago, the Annunciation–St. Demetrios. 1942 saw the Annunciation named as the Cathedral of the Second Archdiocesan District by Archbishop Athenagoras.

The first national conference of the youth of the Archdiocese was held in Chicago in 1951 and Archbishop Michael celebrted the Divine Liturgy at the cathedral. In 1971 Fr. George Economou came to the Cathedral and served it as parish priest for one year. Various priests from St. Demetrios served. In 1973 Fr. Nicholas Nikokavouras of Corfu was assigned to the Cathedral by Archbishop Iakovos. In 1977 the renovation of the Cathedral was begun. The iconography of the dome was completed in 1981 by the iconographer Stathis Trahanatzis, who returned in 1990 to complete the four evangelists on the pendentives and the Platyera located in the Apse of the Sanctuary.