Your Beatitude Metropolitan Epiphaniy of Kyiv and All Ukraine,

Most Reverend Metropolitans and Hierarchs,

Beloved Clergy and Presbyteres of our Church,

Honorable Members of the Diplomatic Corps,

Sisters and Brothers in Christ:

Tonight we celebrate not only your person, Your Beatitude, but we celebrate as well the Pious and Faithful People of Ukraine, whose aspirations for religious independence and control over their own future and spiritual destiny were realized by the loving, pastoral, and indeed maternal care of His All-Holiness Ecumenical Patriarch Bartholomew and the Holy and Sacred Synod of Constantinople.

Your Beatitude, the canonical restoration of a major portion of the Orthodox Christians in Ukraine, and the subsequent establishment of the Orthodox Church of Ukraine – both by its own internal deliberations that elected you as its Primate, and the ultimate Tomos of Autocephaly granted by the Ecumenical Patriarchate, is an accomplishment of the highest order. For this you deserve our heartfelt congratulations and we proclaim you ΑΞΙΟΣ!

From my own personal experience over ten years ago in Ukraine as the Chief Secretary of the Patriarchal Synod, I witnessed firsthand the complexities and exigencies that created the causes and conditions which prompted the canonical acts and processes, resulting in the formation and canonization of the Autocephalous Orthodox Church of Ukraine. It was a process fraught with difficulties at every turn, but the eventual solution that you helped to bring about, Your Beatitude, reflected the historical reality of the relationship between Kyiv and Constantinople.

As I wrote in my recent book “The Ecumenical Patriarch in Ukraine”:

The spiritual bonds that yoke the Metropolis of Kiev with Constantinople and the Ecumenical Patriarchate stem from the indisputable fact that Constantinople is the mother who gave birth to an entire nation in Christ – Rus of Kiev, the Ukrainians of today.

Despite the pens that would re-write history, we know very well from which πηγή the Ukrainian Church sprang – the Life-Giving Fountain of the Queens of Cities, Constantinople –  and how it is that Kyiv is the mother of Moscow, and not the reverse! Moreover, we know that the Autocephaly was always received from Constantinople, for those Local Churches that came into existence in the Second Millennium of our Faith. These are historical facts that cannot be denied, except by those who choose to willfully live in denial. The Autocephaly has yet to be accepted by the majority of Local Churches, but these delays have ever been. There are enough examples of individualized circumstances where a Local Church has forestalled the Ecumenical Throne. As the Mothers in this room know very well, birthgiving is not an easy matter, and comes with pain and great discomfort, but as our Lord Jesus Christ said of His own Passion:

When a woman is in labor, she has pain because her hour has come. But when she has brought forth the child, she no longer remembers her distress because of her joy that a human being is born into the world.(John 16:21)

As the first Primate of the Orthodox Church in Ukraine, Your Beatitude knows both the pain of the birth and the joy of the arrival of the Orthodox Church of Ukraine into the world. You bear the weighty and grave responsibilities of building its future and the future of your pious nation, a nation that is still fighting for its freedom from external pressures, pressures that affect the many other Ukrainian Faithful who are still under the Moscow Patriarchate. This is going to be a long journey, as there are millions of lives in the balance and it will require the wisdom, patience, and dedication that you have shown thus far. Please know, Your Beatitude, that you will have our continued support here in the United States, and wherever the Ecumenical Patriarchate ministers throughout the world, you will know the support of the Mother Church.

Your Beatitude, we all wish you every success and advancement in your mission of peace, unity, and hope for the future. 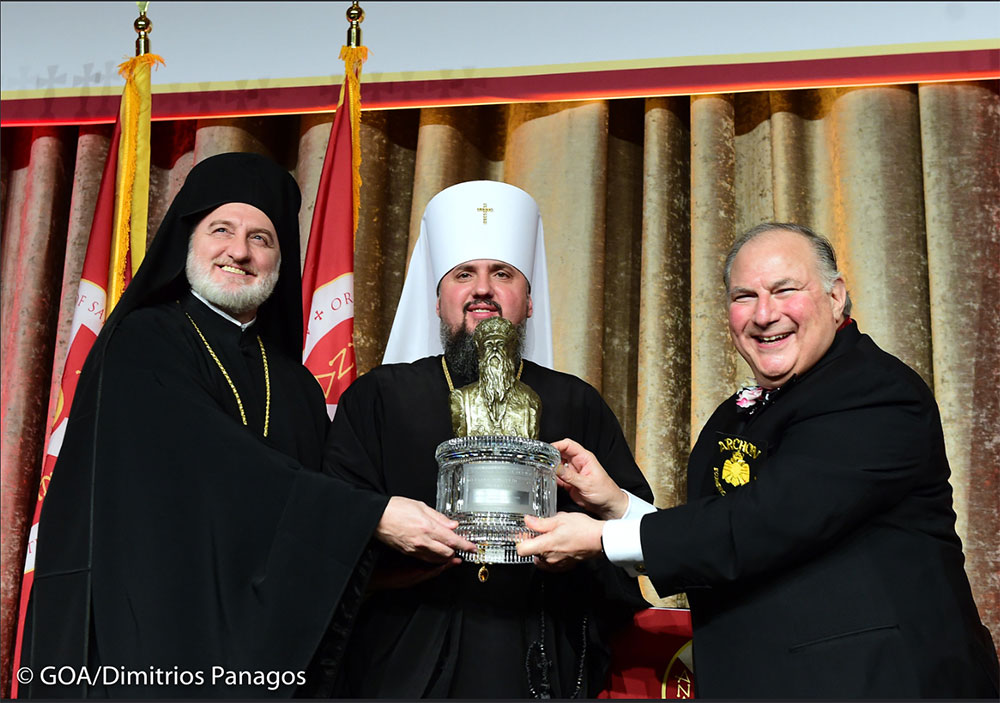