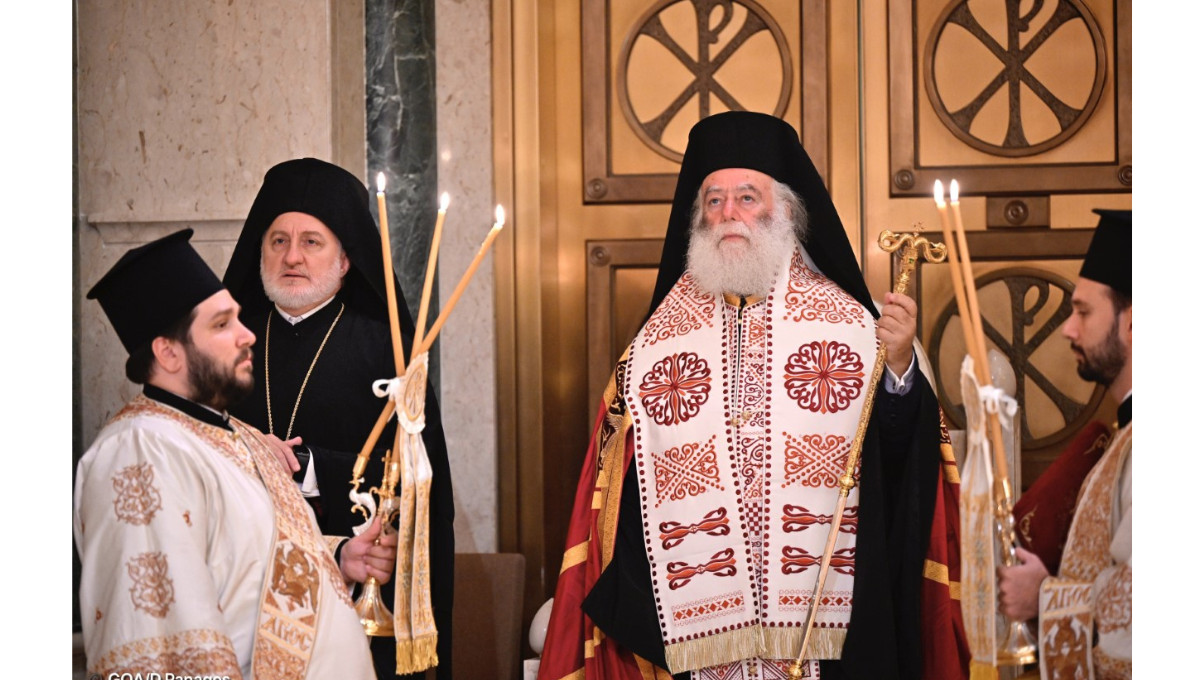 At the Doxology in Honor of

Pope and Patriarch of Alexandria and All Africa

Venerable Hierarchs and Esteemed Members of His Beatitude’s Delegation,

Honorable Representatives of the Governments of Greece and Cyprus,

Your Beatitude – here at our Cathedral in the Nation’s Capital, we welcome You with much gladness and thanksgiving.

Hosting You and Your venerable delegation these past days — both in New York City and here in our Nation’s Capital — has been a wonderful privilege for our Archdiocese. I know that I speak for the Order of Saint Andrew as well – the Archons of the Ecumenical Patriarchate – who were mightily pleased that You received the Athenagoras Human Rights Award.

And here, I would like to thank the Cathedral of Saint Sophia, as well as recognize its Dean and servant for many decades, the Reverend Protopresbyter of the Ecumenical Throne Steven Zorzos, and also to express our appreciation to our esteemed Archon Music Instructor, George Theodoridis, for the magnificent chanting at the Doxology.

Today, as Your Beatitude’s blessed and historic Visit approaches its blessed conclusion, You will be received at the White House and at the U.S. State Department. This unprecedented access, of course, is made possible by the decades of work by our own Protopresbyter of the Ecumenical Throne Alexander Karloutsos.

Working together with every Archbishop of America since the ever-memorable Archbishop Iakovos, our representatives of the Ecumenical Patriarchate have had a special relationship with centers of American Government. Father Alex has continued a tradition that began with the then Archbishop — and later, Patriarch — Athenagoras, who befriended President Harry S. Truman. Your Beatitude should also know that the cornerstone of the Cathedral in which we stand today was laid by the late Archbishop Michael, together with President Dwight D. Eisenhower.

Our Eparchy of the Ecumenical Throne is proud to expedite Your Beatitude’s visit because You are leading the entire Orthodox Church upon the African Continent. We know of the significant moves against Your jurisdictional integrity coming from Russia, which are a direct reaction to Your Beatitude’s righteous stance on the Autocephaly of the Orthodox Church of Ukraine.

Too many Orthodox Churches have forgotten that our Kingdom is not of this world, and we must not reduce Autocephaly to mere nationalistic, or in the case of Russia, imperialistic interests. Your Beatitude has the perspective of an entire Continent that is as diverse as it is vast. Orthodoxy needs Your vision for a return to the values of the Gospel above all other considerations. For while Your sights are set across a continent, Your gaze is one of love for all of God’s children.

Therefore, with open hearts and open minds, we embrace the presence of Your Beatitude, who instantiates the ancient, yet ever-new, Patriarchate of Alexandria.

Truly, we need the light of Christ to burn even more brightly in every lamp that adorns our Church – especially when the days can seem dark, and even threatening (due to the selfishness and greed of some).

We thank You, Your Beatitude, for bringing the light of the inimitable Pharos of Alexandria to our Shores. Together with the beacon of the Phanar, the Orthodox world — and indeed, the entire oikoumene — will be illuminated for the common good of all mankind.

As You prepare to return home, please be assured of our prayers and our best wishes for the continued success of Your Patriarchal ministry.

You leave us with full hearts, but ever wanting more of your wisdom and words.

And so, we now ask for Your Patriarchal blessing, and await Your words of wisdom.