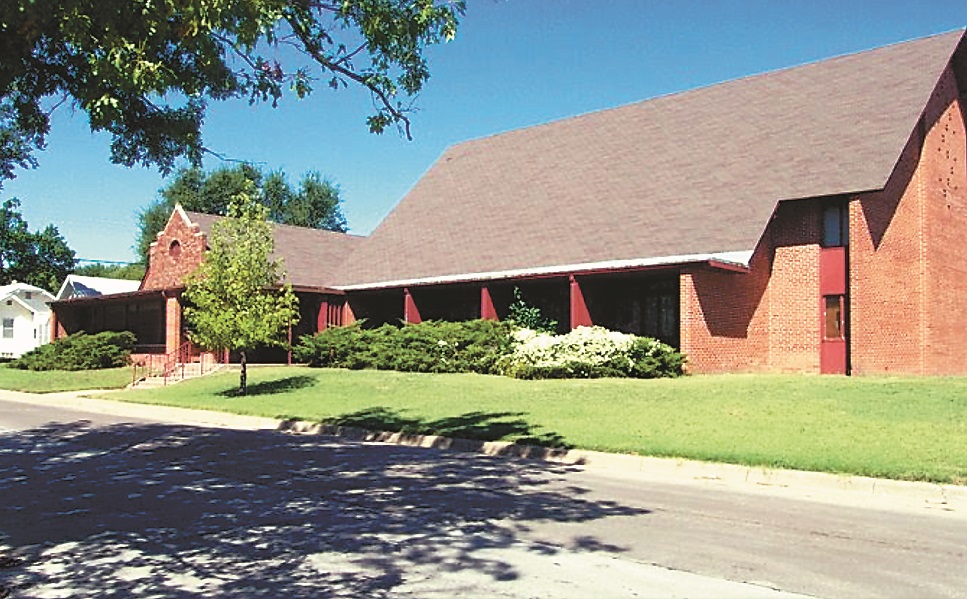 WICHITA, Kansas – The phrase “served by Metropolis clergy” is heard more frequently as a growing number of very small parishes struggle to survive and the number of priests diminishes over time. Holy Trinity Church finds itself in this situation. The parish has had numerous priests on a part–time basis over many years.

Fr. Teodor Bita, a retired priest who served many parishes of the Archdiocese, was the last full-time assigned priest. Fr. Bita was retired and living in Austin, Texas, when he was asked to come out of retirement and serve in Wichita. He served full-time from Feb. 1, 2013 until June 1, 2014, then on a part-time basis until October 2015. Currently, the administrative assistant at Metropolis of Denver headquarters, Fr. Ambrose Omayas, a native Hawaiian, has been traveling the 520 miles from Denver to hold services on important feast days. Most recently he officiated at Holy Week services. Fr. Ambrose has visited every other week to help rebuild the parish.

So to complete this profile, the Observer spoke with the current parish council president, George Damiris, a Wichita native who now commutes on weekends from his home in Dallas, about 350 miles to the south, where he works for an oil refining company. He and his wife still maintain a small home in Wichita, where his daughters and grandchildren still live. He and seven other parishioners, most of whom live in Wichita – about 25 percent of Holy Trinity’s membership – serve on the parish council. They keep the parish united and, despite its small size, manage to fulfill financial commitments to the Church through strong support of Stewardship. The annual budget is about $50,000.

Occasionally the parishioners gather for Typika services and/or social gatherings even when there are no formal church services with a priest. There has not been a Greek festival in about four years. Their outreach effort consists of maintaining a presence on Facebook. The Facebook page is administered by member Doreen Papadatos under the name “Holy Trinity Greek Orthodox Church” (Wichita, KS).

Wichita’s nickname is “The Air Capital of the World.” The city of about 400,000 (ranks largest in Kansas, 49th in the U.S.) is to general aviation what Seattle, home of Boeing, is to commercial aviation. The city is a major center of the general aviation aircraft industry. Companies such Beechcraft, Cessna, (both now part of Textron Aviation) and other firms including Learjet, Airbus and Spirit AeroSystems operate design and manufacturing facilities in Wichita. Until 2014, when it sold its plant, Boeing had a manufacturing operation here, dating from World War II. McConnell Air Force Base also is located here. Most of the parishioners work in the aviation industry at these companies.

According to a brief history on the parish website, Holy Trinity Church was established in 1927. There is no information as to where the first immigrants originated. The first visiting priest came from Memphis, Tenn., to perform Holy Week services. Many Orthodox faithful came from numerous surrounding towns and states to worship and observe their Paschal customs and traditions. With the growth of the aviation industry, beginning during World War II, a new influx of Greeks came to Wichita and the church began to grow. Many baptisms, weddings and funerals were conducted at the AHEPA hall. Community members held fund-raisers and eventually purchased land to build a house of worship, fellowship hall and educational building between 1944-51.

In 1979, local government officials decided it needed the property to make improvements in that part of the city and, though there was heated opposition, they used the concept of eminent domain to take the property. The homeless congregation remained faithful to Orthodoxy and began to meet for church services in many other locations throughout Wichita. However, this situation marked a turning point in the church’s future. Membership dwindled because the church was sold through eminent domain to widen a road. There were no church for some time and several members left. The decision was made to buy the former Lutheran church building, which some people opposed (they either wanted to build new or not buy at this location).

In 1986 the remaining congregation purchased the current property on Dellrose Avenue in the northeast part of the city. They renovated the building as an Orthodox church and prepared it for the door-opening (thyranoixia) and consecration services. Many of the members who had left the church attend one of the two Antiochian Orthodox churches in the city. (Wichita is the seat of the bishop of the Diocese of Wichita and Mid–America). To keep Holy Trinity Church alive, parish council members brought in retired Orthodox priests to minister to the faithful two to three times a month for over 10 years. Mr. Damiris estimates that about as many Greek Orthodox as are members at Holy Trinity attend St. George Antiochian Cathedral or St. Mary’s Antiochian Church because they offer more ministries. With so few members, the parish can’t adequately provide the ministries it needs.

Holy Trinity has about 15 children and there is no Sunday school or Greek school. “We’d love to have Sunday school and other activities but it’s hard with so few people,” said Mr. Damiris. The Philoptochos and AHEPA chapters have ceased to exist. “They’re gone by the boards now,” he said. “We have church whenever we get a priest from the Metropolis.” He continued, “It’s not a rosy picture, but we’re doing our best to keep the doors open. We really need a priest to lead our efforts. We’re working with Metropolitan Isaiah, but there’s a shortage of priests. “The best thing to say is we’re down to a core membership that is working hard to keep things going.”