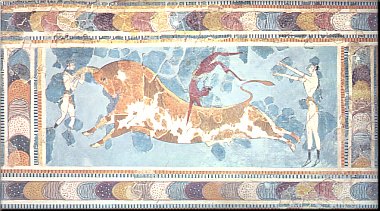 As you are preparing your Science project for your school’s next Learning Fair, you receive in the mail an invitation to visit the palace of King Minos (Μίνως) in Ancient Crete. You know well that the Minoan civilization was destroyed more than 3,000 years ago, but the invitation is from the King himself who urges you to explore his palace so that you can present it to your contemporaries. His final instructions are: “Follow the Process to spin a web of knowledge to guide you out of the darkness of the maze, like my daughter would.”

The final goal of your exploration is to develop a poster which you can present in the upcoming Science Fair. Your poster should include answers to basic questions such as

Your poster should include a combination of textual and visual elements, which you will have to organize in a way that tells the story of the Minoan civilization clearly for your peers.

Now that you have explored the Minoan civilization in such detail, you are ready to present your poster in the Science Learning Fair of your school. If you are doing this Webquest as part of a classroom lesson plan, you can ask your teacher to let you present your posters to one another as part of a poster day! I hope you enjoyed this exploration!

Developed by Dr. Andreas Karatsolis for the Department of Greek Education of the Greek Orthodox Archdiocese