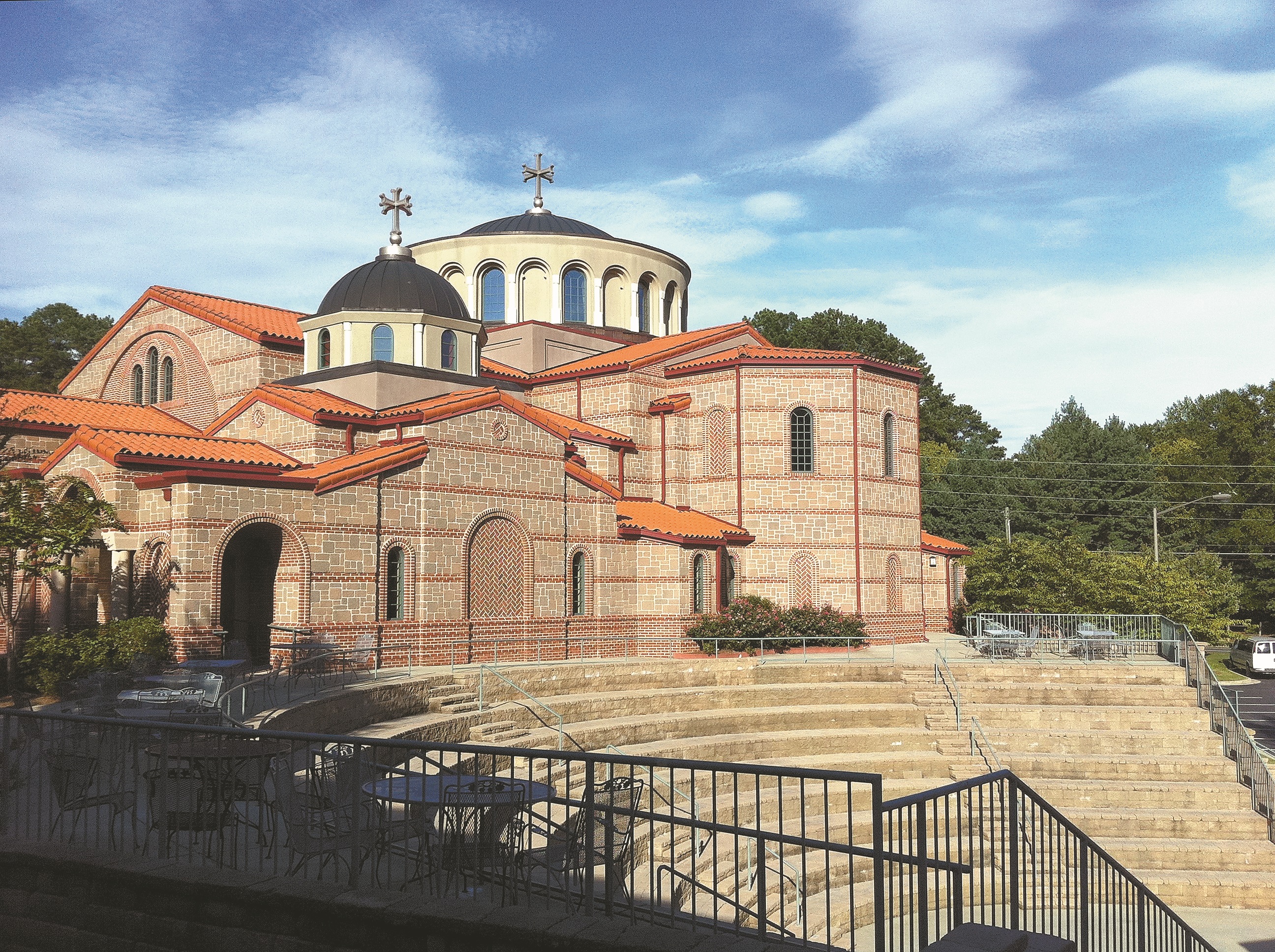 MARIETTA, Ga. – One of the newest parishes of the Metropolis of Atlanta, Holy Transfiguration Church took root in the late 1980s in this northwestern suburb of Atlanta through the efforts of parishioners of Atlanta’s Annunciation Cathedral. The church has a major presence in this city of more than 60,000 population. “This is a dynamic parish; a lot of good people looking for God,” said Fr. Papageorgiou, who has served the community for 10 years.

Education is a major emphasis, not only for the youth, but for adults as well. Sunday school, adult catechetical classes and Bible study, Greek school and adult Greek school classes are the ongoing programs that transmit the faith and culture to the faithful. Fr. Papageorgiou also holds retreats during the year, not only at the parish, but at other churches as well.

A major conference is planned at the parish for the fall that will take place over two weekends and will serve as an outreach to the greater Marietta community. In addition to Fr. Panayiotis as the featured speaker, the conference will include presentations by two Protestant clergymen holding Ph.Ds who are sympathetic to Orthodoxy.

Fr. Panayiotis is a noted Orthodox scholar. Though he started out pursuing degrees in chemical engineering (He studied chemical engineering at the City College of New York, earning a Bachelor’s degree in engineering cum laude, then continued his studies on a Graduate Research Scholarship at the University of Notre Dame where he completed his Master’s degree in chemical engineering). But he felt called to the priesthood and enrolled at Holy Cross School of Theology, then completed his Ph.D., at the Catholic University of America in Washington, specializing in the history and theology of the Early Christian Church. A member of the International Association for Patristic Studies, the Orthodox Theological Society of America and the North American Patristic Society, he travels to various conferences to present academic papers, including Oxford University and other patristic conferences.

At Transfiguration Church, his goal is to establish an Orthodox school in the future that would be open to everyone. He said it would provide “a classical education with an Orthodox Christian foundation." The parish is undertaking a renovation program on its existing buildings and adding an extension that will contain classrooms. About 70 percent of the church’s operating budget is supported through stewardship, with the rest coming from donations, candles and fund-raisers. Revenue from the annual Greek festival is not used for the operation of the church, Fr. Panayiotis explained, but instead goes toward supporting charitable organizations and causes in the greater Marietta community, with some used for the building fund. Transfiguration Church has an extensive youth ministry, including a large Greek dance program, with several age groups taking part in the annual Hellenic Dance Festival of the Metropolis of Atlanta.

According to a parish history, on Sept. 18, 1988, 16 people attended a meeting at Eftichia and Allen Macris’ home to discuss their need for establishing a local Greek Orthodox Church in the northwestern suburbs of Atlanta. As the city grew and more Orthodox parishioners moved to the suburbs, more and more people found it difficult to travel to the Atlanta Cathedral for their spiritual and social needs. It became clear to these Orthodox Christians that a new parish was necessary to enable them to continue to be involved deeply with their families in the Orthodox Church.

Following this gathering, the first organizational meeting took place on Nov. 28, 1988 at a bank building where the Northwest Metro Atlanta Hellenic Association was established and the first officers were elected. The Association organized the first church services during Holy Week (April 23-29, 1989) at the St. James Episcopal Church in Marietta. The process of organizing a parish commenced; 50 families pledged their support to the project and on Sunday, August 6, 1989, the group celebrated their first Divine Liturgy as “The Holy Transfiguration Greek Orthodox Church of Marietta” at the Ray Thomas Memorial Presbyterian Church on Sandy Plains Road. A month later, the new parish moved into a renovated storefront in the Sprayberry Crossings Shopping Center were it worshiped until Christmas of 1993. Cost of new building was $6.5 million Within the first year the membership grew to 184 households and individuals.

During the ensuing years, the growth of the parish was steady. The group attracted many new young families that were moving into the area. Most members are Greek Americans with many converts and very few immigrants. Both young and old, the people were generous in their support of the operations of the Parish and of the new plans for permanent buildings and facilities. In 1991, through the generosity of Tony and Dora Manolius (in honor of Dora’s parents, Kimon and Despina Kutelis) the 7.5 acre tract of land on Trickum Road was purchased, which would eventually become the permanent home of the parish. Under the leadership of their parish priest, then Fr. Sebastian Skordallos (now Bishop Sevastianos of Zela, secretary of the Holy Eparchial Synod of the Archdiocese), the community built its new church.

On Christmas Eve 1993, they moved to the new location on Trickum Road and into their new multipurpose facility, which they were able to build. Fr. Sebastian was the parish’s longest-serving priest, 11 1⁄2 years. The efforts for growth continued and were finally crowned with the construction of a beautiful Byzantine church. The opening of the doors took place in early January 2004. This new leap ahead propelled the parish even further with the addition of over 100 new families. Today, the parish continues its ambitious growth under the leadership of Fr. Panayiotis Papageorgiou, Ph.D. Future building plans include a gymnasium-athletic center, new classrooms, offices and other pertinent parish spaces. The parish celebrated the consecration of its sanctuary on April 27, 2013.