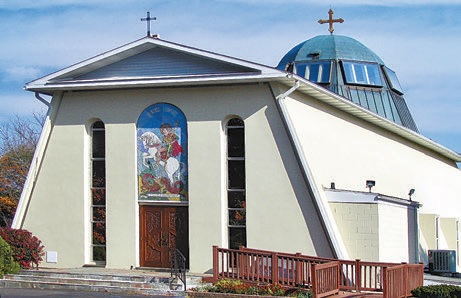 KINGSTON, N.Y. – The picturesque Hudson Valley between Albany and New York City, settled by the Dutch in the 17th century, is home to a several parishes of more recent vintage, and to Saint Basil Academy.

Among them is St. George, a small church in the small city of Kingston (locally referred to as K-Town) that had a larger membership in more prosperous times.

With a population of nearly 25,000, the sleepy little city near the Catskills about halfway between New York and Albany had as its main claim to fame its status as the capital of New York in 1777, at the height of the Revolutionary War, until the British army burned it. Now it is home to such cultural attractions as the Hudson River Maritime Museum, the Trolley Museum of New York and the Catskill Mountain Railroad.

The contemporary parish, located near the downtown area, is a very active one.

“The parish is like a family, very closely knit”, said Fr. Kourametis, who has served the community nearly three years.

An active choir, consisting of 10 members, is one of the key ministries, drawing praise from Archbishop Demetrios who visited the parish.

Active ministries include Sunday school and Greek school, each with nearly 25 students.

The youth of the community hold an annual Greek dance, and the Junior GOYA go Christmas caroling to a local senior citizens home.

A Hellenic women’s club performs philanthropic work in the city and donates to Archdiocese causes that include fund raisers for Saint Basil Academy and St. Nicholas Church and National Shrine.

In 2015, for the first time, members of St. George participated in the annual Greek Independence Day Parade on Fifth Avenue in Manhattan.

The parish is on the Stewardship Program and major fund raisers include the annual bazaar the weekend before Thanksgiving, and a large dinner dance after Pascha to celebrate the Feast Day of St. George.

In the greater Kingston community Fr. Michael meets regularly with area clergy, mostly Roman Catholic and Dutch Reformed, reflecting the large influence of the Dutch from the 17th century the Hudson Valley was part of the New Netherland colony.

“We are a small but very active parish of kind, kind people,” said Fr. Michael.

The parish has a few immigrants, but mostly first to fourth-generation. Several own restaurants; others are doctors, lawyers and in other vocations.

According to a parish history, St. George was a dream of the early Greek Orthodox settlers of this area for many years. Before 1960, Greek Orthodox people made the long trip to either Poughkeepsie or Newburgh to attend services.

Some of the original settlers of Kingston helped form the parishes of Kimisis in Poughkeepsie and St. Nicholas in Newburgh.

Among them was George Maouris who became the church psalti. His daughter, Polyxeni Maouris Hillier eventually went to Holy Cross School of Theology and now serves as director of the St. Photios Greek Orthodox National Shrine.

In 1960, Chris J. Larios, chairman of the original committee, was elected Board of Trustees president.

He wrote to Ecumenical Patriarch Athenagoras to explain the need for a Greek Orthodox community in Kingston. He soon received a letter from the Patriarch giving his blessing.

The original census revealed more than 140 adults and 73 children.

The first full-time parish priest to be assigned was Fr. Nicholas Katsoulis.

Property was purchased and the groundbreaking for a church was held on Palm Sunday, 1964.

The parish had several hundred members, but the closing of the IBM plant caused the parish to lose numbers.