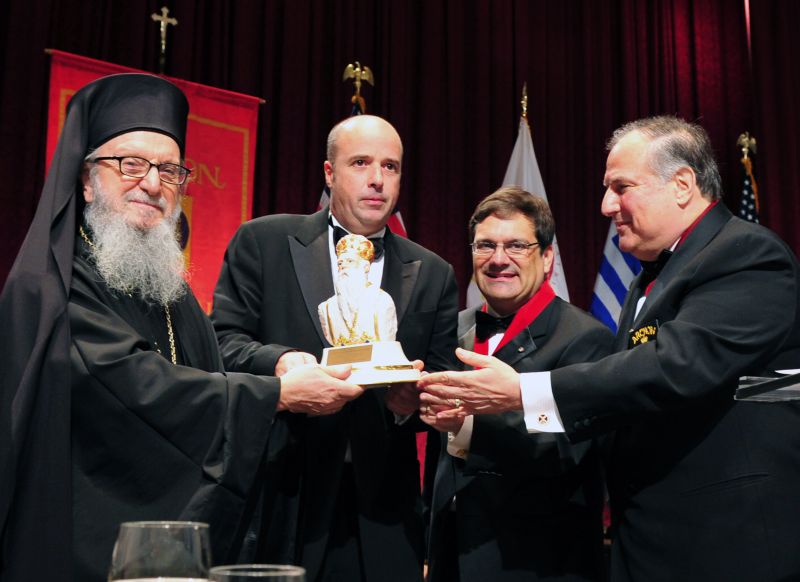 NEW YORK – Archbishop Demetrios of America, Exarch of the Ecumenical Patriarchate in the Western Hemisphere together with Archons’ National Commander Dr. Anthony Limberakis presented the Athenagoras Human Rights Award to Andreas Dracopoulos, co-president and director of the Stavros Niarchos Foundation, the honoree of this year’s award. The award was presented during the Order of St. Andrew the Apostle, Archons of the Ecumenical Patriarchate Award Banquet, held at the New York Hilton, Oct. 20, 2012.

Archons National Commander Dr. Anthony Limberakis, paid tribute to the Stavros Niarchos Foundation, one of the world’s leading international philanthropic organizations, for their extraordinary and positive impact on the public welfare. Dr. Limberakis enumerated the various activities of philanthropic giving of the Niarchos Foundation saying that the foundation in its 16 year history has provided 1,900 grants to nonprofit organizations in 90 nations around the world, with on billion dollars in humanitarian grnts. He particularly pointed out the Foundation’s $130 million grant to the suffering citizens of Greece which he said “it exemplifies the ethos of philanthropy.” Concluding his address Dr. Limberakis said that “the Foundation and its director are worthy of emulation and most worthy to receive the Athenagoras Human Rights Award,” and exclaimed the words “Axios, Axios, Axios!”

In accepting the award Mr. Andreas Dracopoulos expressed his gratitude for the honor, both personally and on behalf of the Niarchos Foundation. He spoke of the Foundation’s ideals in support of basic freedoms, such are the freedom of speech, the freedom of religion and worship, and the freedoms from bond and from fear. He also outlined an ideal of a society of social welfare, which provides for its citizens the basic needs for life, decency, dignity, civility, the opportunity to dream and the hope for a better tomorrow and expressed the need to collaborate towards this end. Mr. Dracopoulos, said that philanthropy can be expressed in many ways and financial support is an effective one while volunteerism is another important such expression. He said that the Niarchos Foundation through their philanthropic giving wants to sustain the basic pillars of society and democracy. He finally  quoted a Greek philosopher  who said that true love can only be achieved by being able to constantly seek your ideals and urged all present “to seek your ideals, do your best to help the needy and in doing so stay in love.”

Archbishop Demetrios, who spoke at the end of the evening, congratulated Mr. Dracopoulos and the Stavros Niarchos Foundation for their work worldwide, he said “their work is a very differentiated and diversified giving activity,” and outlined with many examples in the 16 years of life of the Foundation. His Eminence pointed out that unlike other foundations and organizations the Niarchos Foundation only gives, it does not collect and it does fundraise. The Archbishop outlined the many qualities of courage, compassion and reconciliation of Patriarch Athenagoras and pointed out that the recipients of this award are indeed worthy of the honor. His Eminence said that Mr. Dracopoulos in leading the Stavros Niarchos Foundation, has demonstrated an ethos of compassion which through philanthropy helps overcome human suffering , promotes community vitality, the enrichment of quality of life, the sustainable advancement of our Hellenic cultural heritage and the continued achievement of Hellenes and people around the world.

Those who offered additional remarks earlier in the program were Archon John Halecky, Jr., the Archon’s National Secretary and the Ambassador of Greece to the United States Christos Panagopoulos.

Congressman Gus Bilirakis, who’s is also an Archon, served as Master of Ceremonies and Archon Andrew Manatos offered the introduction of the dais guests. Archon Theodore Dimitriou and Archon Dean Poll were co-chairs, while Archon Depoutatos and National Vice-Commander Nicholas J. Bouras together with the Niarchos Foundation were the underwriters of the event.

Photos from the Athenagoras Human Rights Award Gala and new Archons Investiture ceremony can been viewed at: https://www.flickr.com/photos/goarch/albums/72157646287610070