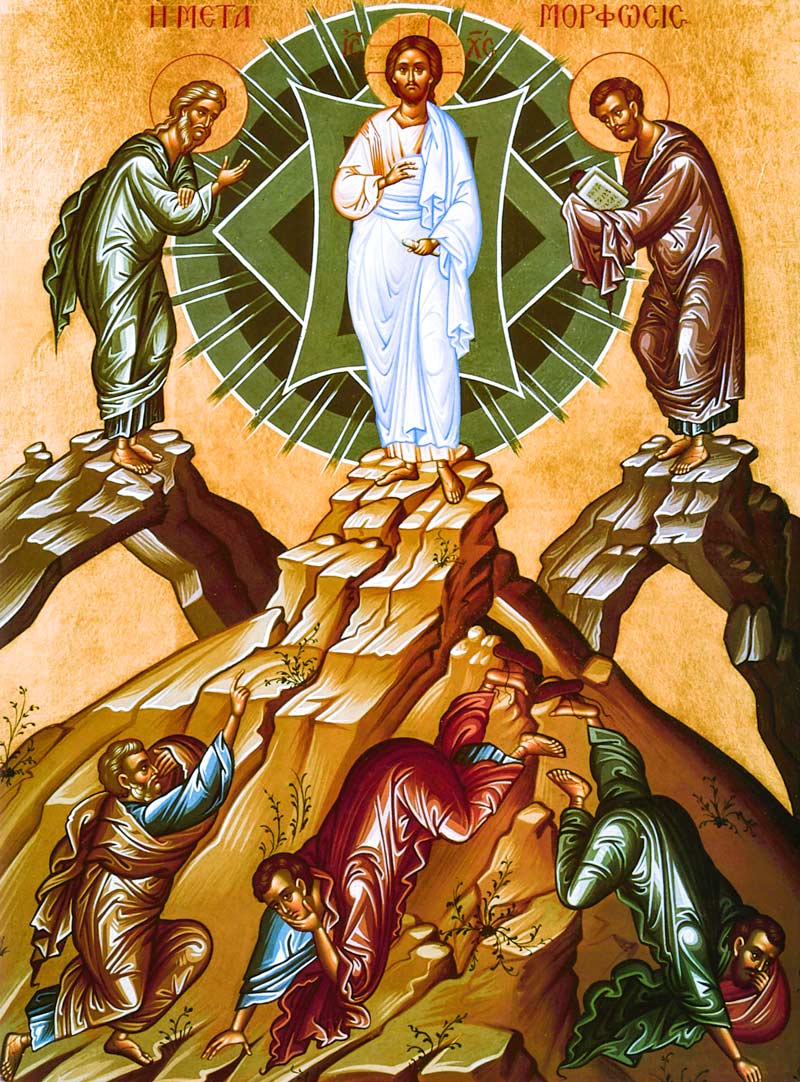 The Feast of the Transfiguration of Our Lord, God and Savior Jesus Christ is celebrated each year on August 6. The feast commemorates the transfiguration or metamorphosis of Christ on Mount Tabor, when our Lord appeared in His divine glory before the Apostles Peter, James, and John.

The event of the Transfiguration is recorded in three of the four Gospels:Matthew 17:1-9, Mark 9:2-8, and Luke 9:28-36. Jesus took the Apostles Peter, James, and John with Him up upon a mountain, and while they were on the mountain Jesus was transfigured. His face shone like the sun, and His garments became glistening white.

Moses and Elijah appeared with Christ, talking to Him. Peter declared how good it was for them to be there and expressed the desire to build three booths for Moses, Elijah, and Christ. This reference to the booths could imply that this occurred during the time of the Feast of Tabernacles when the Jews would be camping out in the fields for the grape harvest; for this Feast had acquired other associations in the course of its history, including the memory of the wanderings in the wilderness recorded in the Old Testament book of Exodus.

While Peter was speaking, a bright cloud overshadowed them. A voice came from the cloud saying, "This is my beloved Son, with whom I am well pleased; listen to Him." When the disciples heard this they fell on their faces filled with awe. Jesus came to them and told them to not be afraid. When the three looked up they saw only Jesus.

As Jesus and His disciples came down the mountain, He told them not to speak of what they had seen until He had risen from the dead.

In the icon of the Feast of the Transfiguration, Christ is the central figure (1.), appearing in a dominant position within a circular mandorla. He is clearly at the visual and theological center of the icon. His right hand is raised in blessing, and his left hand contains a scroll. The mandorla with its brilliant colors of white, gold, and blue represent the divine glory and light. The halo around the head of Christ is inscribed with the Greek words O on, meaning "The One Who is".

1. Christ appears in the center of the icon blessing with His right hand and dressed in bright white robes (detail).

Elijah (2.) and Moses (3.) stand at the top of separate mountain peaks to the left and right of Christ. They are bowing toward Christ with their right hands raised in a gesture of intercession towards Him. Saint John Chrysostom explains the presence of these two fathers of the faith from the Old Testament in three ways. He states that they represent the Law and the Prophets (Moses received the Law from God, and Elijah was a great prophet); they both experienced visions of God (Moses on Mount Sinai and Elijah on Mount Carmel); and they represent the living and the dead (Elijah, the living, because he was taken up into heaven by a chariot of fire, and Moses, the dead, because he did experience death). 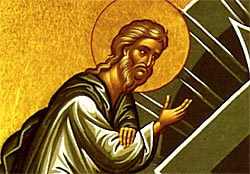 2. The Prophet Elijah, appears on Christ's right-hand side (detail). 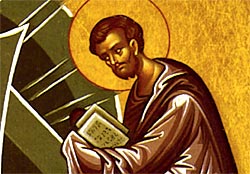 3. Moses, who is seen holding the Ten Commandments, appears on Christ's left-hand side (detail).

Below Christ are the three Apostles, who by their posture in the icon show their response to the transfiguration of Christ (4.). James has fallen over backwards with his hands over his eyes. John in the center has fallen prostrate. Peter is kneeling and raises his right hand toward Christ in a gesture expressing his desire to build the three booths. The garments of the Apostles are in a state of disarray as to indicate the dramatic impact the vision has had on them. 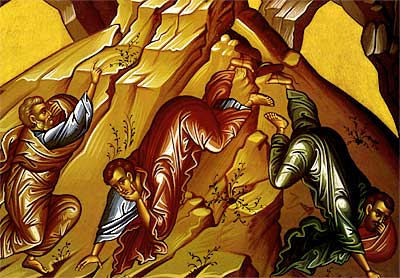 4. The three Apostles who accompanied Christ to the moutain, Peter, John, and James, react to the vision of Christ's Transfiguration. 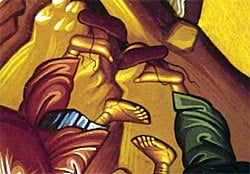 5. The garments of the Apostles are in state of disarray (detail). 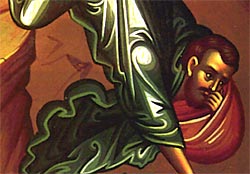 6. The Apostle James reacts to the vision by falling to the ground and attempting to cover his eyes (detail).

The icon of the feast directs our attention toward the event of the Transfiguration and specifically to the glory of God as revealed in Christ. This event came at a critical point in the ministry of our Lord, just as He was setting out on His journey to Jerusalem. He would soon experience the humiliation, suffering, and death of the Cross. However, the glorious light of the Resurrection was revealed to strengthen His disciples for the trials that they would soon experience.

The feast also points to the great and glorious Second Coming of our Lord and the fulfillment of the Kingdom of God when all of creation will be transfigured and filled with light.

Orthodox Christian Celebration of the Feast of the Transfiguration

Listen to the Hymns of the Feast of Transfiguration

Apolytikion (Grave Tone)
You were transfigured on the Mount, Christ God revealing Your glory to Your disciples, insofar as they could comprehend. Illuminate us sinners also with Your everlasting light, through the intercessions of the Theotokos. Giver of light, glory to You.

Kontakion (Grave Tone)
You were transfigured upon the mount, O Christ our God, and Your disciples, insofar as they could bear, beheld Your glory. Thus, when they see You crucified, they may understand Your voluntary passion, and proclaim to the world that You are truly the effulgence of the Father.

Stewardship: The Transfiguration of our Lord and Savior Jesus Christ

The Feast of the Transfiguration on Mt. Tabor reveals the glorious light of Christ’s divinity. In describing this event St. John Chrysostom explains that Moses represents the Law and Elijah the Prophets of the Old Testament. Both had visions of God. Moses is symbolic of the dead while Elijah, having been carried up to heaven in a chariot of fire, represents the living over whom - both the living and the dead - Christ reigns in glory!

Also in the icon are the Apostles Peter, James and John. Christ appears to them, not in the form of man, the "suffering servant", but in the form of God! Church hymnology states: "For taking apart the three Disciples He has expressly chosen...He led them up into the mountain by themselves; and for a short time He concealed the flesh He had assumed, and was transfigured before them."

Orthodox Christian STEWARDSHIP is the response we offer when God lives in our lives. The participation of the three disciples, along with Moses and Elijah, reveal to us the entire Church: the disciples representing the Church on earth and the prophets the heavenly Church. God’s covenant in the Old Testament is fulfilled in Christ. The testimony of these two prophets and three disciples is the revelation of God in Trinity: Father, Son and Holy Spirit. We, then, become members of the body of Christ through Baptism and Chrismation into the Faith.

The STEWARDSHIP Program is the way for everyone to belong. We are expected to make an honest and sincere contribution to the sacred ministry of the Church. No matter what one’s income so long as one gives as an expression of faith and love the work of Christ’s church will grow and prevail.

To learn more, visit the Department of Stewardship.