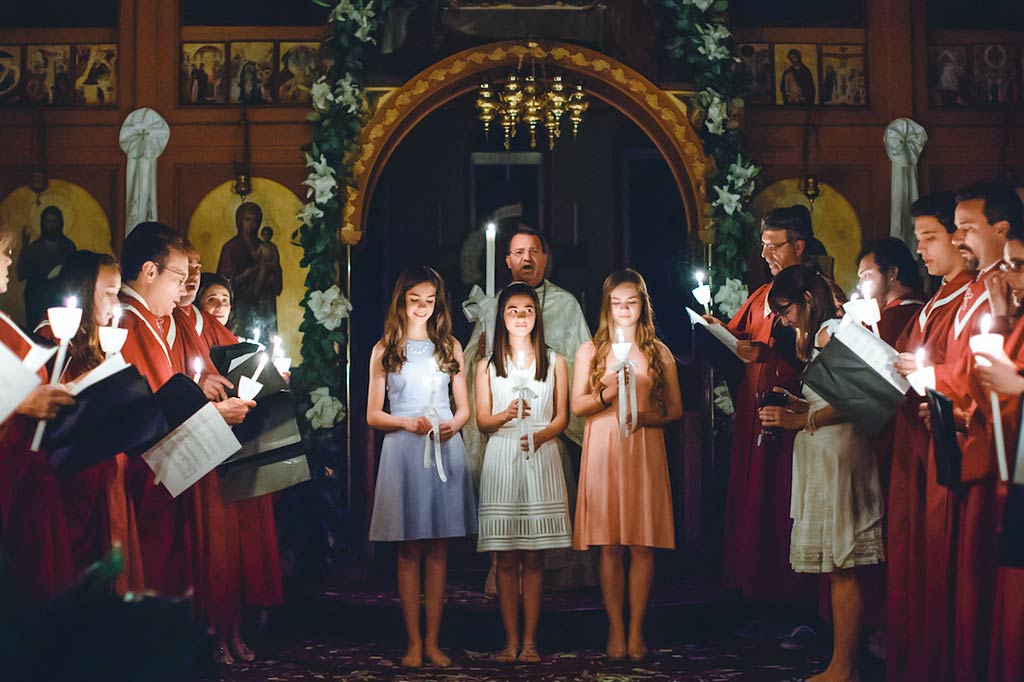 On the Great and Holy Feast of Pascha, Orthodox Christians celebrate the life-giving Resurrection of our Lord and Savior Jesus Christ. This feast of feasts is the most significant day in the life of the Church. It is a celebration of the defeat of death, as neither death itself nor the power of the grave could hold our Savior captive. In this victory that came through the Cross, Christ broke the bondage of sin, and through faith offers us restoration, transformation, and eternal life. 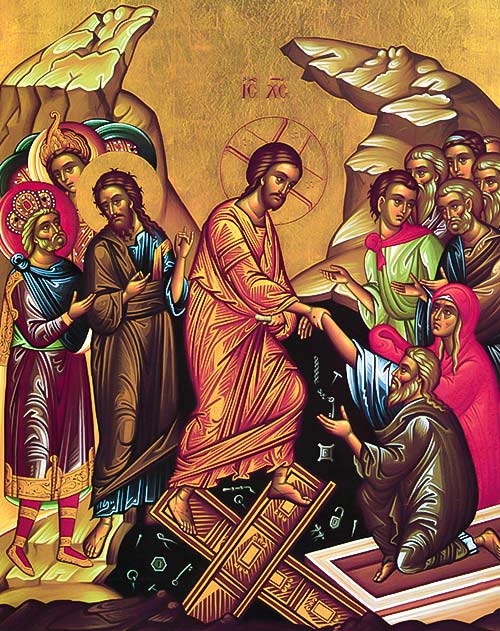 Holy Week comes to an end at sunset of Great and Holy Saturday, as the Church prepares to celebrate her most ancient and preeminent festival, Pascha, the feast of feasts. The time of preparation will give way to a time of fulfillment. The glorious and resplendent light emanating from the empty Tomb will dispel the darkness. Christ, risen from the dead, cracks the fortress of death and takes "captivity captive" (Psalm 67:19). All the limitations of our createdness are torn asunder. Death is swallowed up in victory and life is liberated. "For as by a man came death, by a man came also the resurrection of the dead. For as in Adam all die, so also in Christ shall all be made alive" (I Corinthians 15:21-22). Pascha is the dawn of the new and unending day. The Resurrection constitutes the most radical and decisive deliverance of humankind.

The Resurrection of Jesus Christ is the fundamental truth and absolute fact of the Christian faith. It is the central experience and essential kerygma of the Church. It confirms the authenticity of Christ's remarkable earthly life and vindicates the truth of His teaching. It seals all His redemptive work: His life, the model of a holy life; His compelling and unique teaching; His extraordinary works; and His awesome, life-creating death. Christ's Resurrection is the guarantee of our salvation. Together with His Ascension it brings to perfection God's union with us for all eternity.

The Resurrection made possible the miracle of the Church, which in every age and generation proclaims and affirms "God's plan for the universe, the ultimate divinization of man and the created order." The profound experience of and the unshakable belief in the risen Lord enabled the Apostles to evangelize the world and empowered the Church to overcome paganism. The Resurrection discloses the indestructible power and inscrutable wisdom of God. It disposes of the illusory myths and belief systems by which people, bereft of divine knowledge, strain to affirm the meaning and purpose of their existence. Christ, risen and glorified, releases humanity from the delusions of idolatry. In Him grave-bound humanity discovers and is filled with incomparable hope. The Resurrection bestows illumination, energizes souls, brings forgiveness, transfigures lifes, creates saints, and gives joy.

The Resurrection has not yet abolished the reality of death. But it has revealed its powerlessness (Hebrews 2:14-15). We continue to die as a result of the Fall. Our bodies decay and fall away. "God allows death to exist but turns it against corruption and its cause, sin, and sets a boundary both to corruption and sin." Thus, physical death does not destroy our life of communion with God. Rather, we move from death to life - from this fallen world to God's reign.

Icon of the Commemoration of Great and Holy Pascha 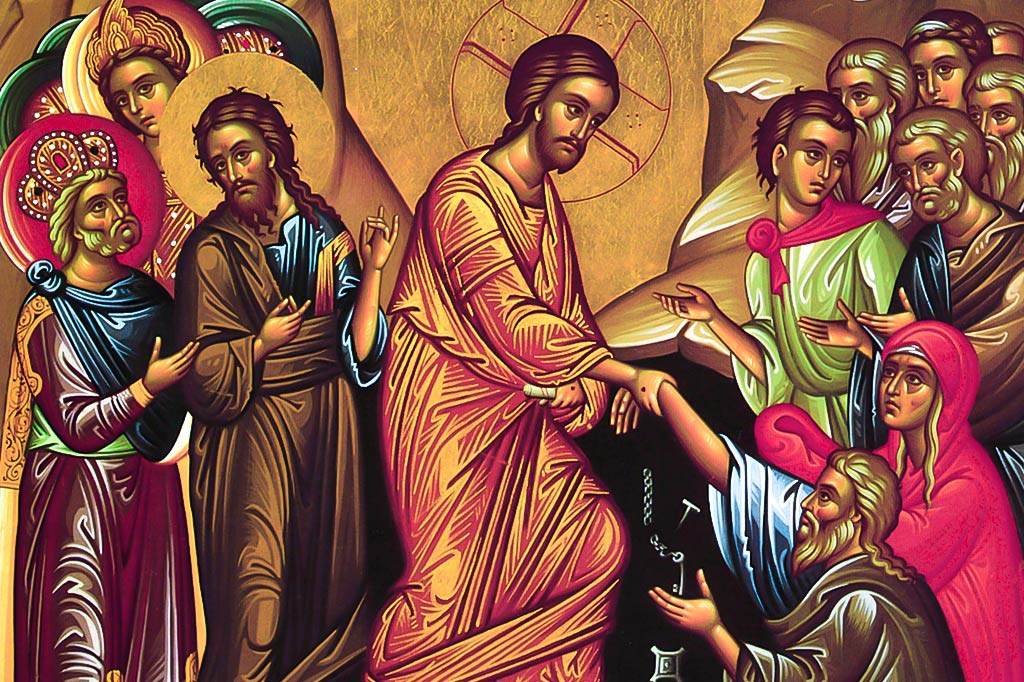 One of the most symbolic of the Festal Icons of the Orthodox Church is that of the Holy Resurrection. In the center of this radiant event is Christ pulling Adam and Eve up from their tombs. The gates of the Realm of Death are broken and thrown down. Death, personified in human form is defeated, and bound hand and foot at the bottom of the scene. We recall the joyous words of St. Paul: "O death, where is thy sting? O grave, where is thy victory?" (1 Corinthians 15:55)

In the background stands the host of the departed, so numerous they can not be depicted. Among them in the front of the multitude are some of the righteous dead, though now invigorated by the Resurrection. King David and his son Solomon are seen on the left wearing crowns. Near the center is Saint John the Baptist. On the other side is Abel, the son of Adam and the first man to ever die. He wears a shepherds robe and has a cane. Many Icons of this subject depict large crowds with a few other recognizable prophets. 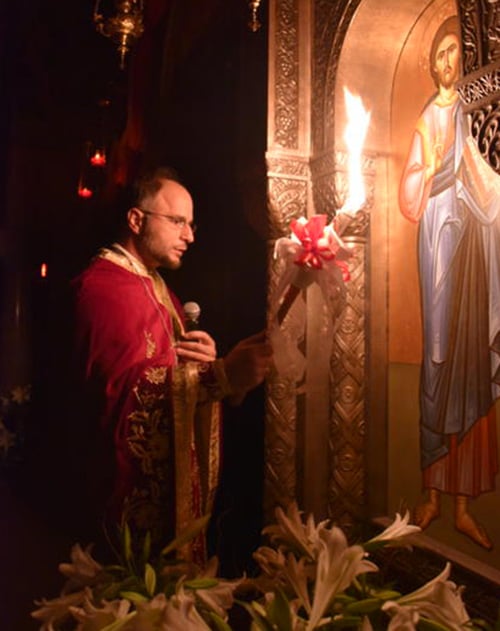 Before midnight on Saturday evening, the Odes of Lamentation of the previous day are repeated. The Orthros of the Resurrection begins in complete darkness. The priest takes light from the vigil light and gives it to the faithful, who are holding candles. The priest sings: "Come ye and receive light from the unwaning light, and. glorify Christ, who arose from the dead", and all the people join him in singing this hymn again and again. From this moment, every Christian holds the Easter candle as a symbol of his vivid, deep faith in the Resurrection of Jesus Christ as Savior. In many churches the priest leads the people outside the church, where he reads the Gospel which refers to the Angels statement: "He is Risen; He is not here," (Mark 16:1-8).

Then comes the breathless moment as the people wait for the priest to start the hymn of Resurrection, which they join him in singing, repeatedly: "Christ has Risen from the dead, by death trampling upon Death, and has bestowed life upon those in the tombs". From this moment the entire service takes on a joyous Easter atmosphere. The hymns of the Odes and Praises of Resurrection which follow are of superb meaning and expression. The people confess, "It is the Day of Resurrection, let us be glorious, let us embrace one another and speak to those that hate us; let us forgive all things and so let us cry, Christ has arisen from the dead". By this hymn they admit that love of one's fellowman is the solid foundation of the faith in the Resurrection of Christ.

The Divine Liturgy of Saint John Chrysostom is then officiated. At the end of the Liturgy, a part of the marvelous festival sermon of Saint Chrysostom is read, which calls upon the people to "Take part in this fair and radiant festival. Let no one be fearful of death, for the death of the Savior has set us free . . . O Death, where is thy sting? O Hades, where is Thy victory? Christ is Risen and Thou art overthrown. To Him be glory and power from all ages to all ages."

On Easter Sunday afternoon the faithful gather once more for prayer with lighted candles. All sing the hymn, "Christ is Risen from the Dead". The people greet one another joyously, saying: "Christ is Risen", the Easter salutation which is answered, "Truly He is Risen". They sing, "the dark shadows of the Law has passed away by the coming of grace", and standing in exaltation they exclaim, "Who is so great a God as our God?"

The Gospel according to John (20:19-25) is read in various languages, proclaiming the Good News of Resurrection all over the universe without discrimination. The fruit of faith in the Resurrection of the Lord is love in His Name; therefore, this day is called "Sunday of Agape" (love feast), a day dedicated to Christian principles, especially to forgiveness and charity. At this time, Christians seek to end misunderstanding and arguments among those whom they may be at odds. Apostle Paul firmly interprets the Resurrection of Christ, saying: "If Christ has not been raised, then our preaching is in vain and your faith is in vain" (1 Corinthians 15:14). The Church also states in its Creed, "The Third day He rose again."

Apolytikion (Plagal of the First Tone)

Christ is risen from the dead, by death trampling down upon death, and to those in the tombs He has granted life.

First Ode of the Canon of Pascha (First Tone)

It is the day of Resurrection, let us be radiant, O ye peoples: Pascha, the Lord's Pascha; for Christ God hath brought us from death to life, and from earth unto Heaven as we sing the triumphal hymn.

Doxastikon of the Praises (Plagal of the First Tone)

It is the day of Resurrection; let us be radiant for the festival, and let us embrace one another. Let us say, O brethren, even to those that hate us: Let us forgive all things on the Resurrection; and thus let us cry: Christ is risen from the dead, by death He has trampled down death, and on those in the tombs He has bestowed life.