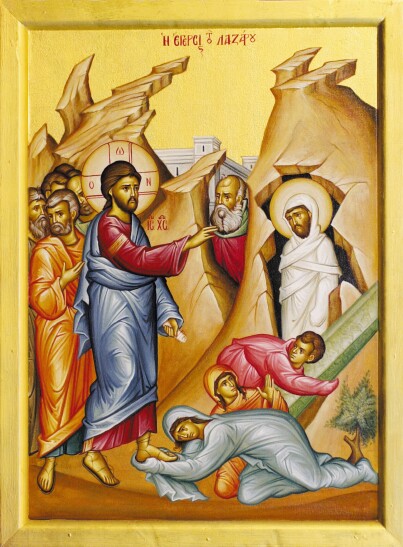 Lazarus and his sisters Martha and Mary, the friends of the Lord Jesus, had given Him hospitality and served Him many times (Luke 10:38-4z; John 12:2-3). They were from Bethany, a village of Judea. This village is situated in the eastern parts by the foothills of the Mount of Olives, about two Roman miles from Jerusalem. When Lazarus - whose name is a Hellenized form of "Eleazar," which means "God has helped," became ill some days before the saving Passion, his sisters had this report taken to our Saviour, Who was then in Galilee. Nonetheless, He tarried yet two more days until Lazarus died; then He said to His disciples, "Let us go into Judea that I might awake My friend who sleepeth." By this, of course, He meant the deep sleep of death. On arriving at Bethany, He consoled the sisters of Lazarus, who was already four days dead. Jesus groaned in spirit and was troubled at the death of His beloved friend. He asked, "Where have ye laid his body?" and He wept over him. When He drew nigh to the tomb, He commanded that they remove the stone, and He lifted up His eyes, and giving thanks to God the Father, He cried out with a loud voice, "Lazarus, come forth." And he that had been dead four days came forth immediately, bound hand and foot with the grave clothes, and Jesus said to those standing there, "Loose him, and let him go." This is the supernatural wonder wrought by the Saviour that we celebrate on this day.

According to an ancient tradition, it is said that Lazarus was thirty years old when the Lord raised him; then he lived another thirty years on Cyprus and there reposed in the Lord. It is furthermore related that after he was raised from the dead, he never laughed till the end of his life, but that once only, when he saw someone stealing a clay vessel, he smiled and said, "Clay stealing clay." His grave is situated in the city of Kition, having the inscription: "Lazarus the four days dead and friend of Christ." In 890 his sacred relics were transferred to Constantinople by Emperor Leo the Wise, at which time undoubtedly the Emperor composed his stichera for Vespers, "Wishing to behold the tomb of Lazarus . . ."

O Christ our God, before Your Passion, You raised Lazarus from the dead to confirm the common Resurrection for all. Therefore, we carry the symbols of victory as did the youths, and we cry out to You, the victor over death, "Hosanna in the highest. Blessed is He who comes in the name of the Lord. "

Christ, everyone's joy, the truth, the light, life, the resurrection of the world, has by His goodness appeared to those on earth. He is the archetype of the resurrection, granting divine forgiveness to all.

Share the feast of Lazarus Saturday with an icon greeting ecard.