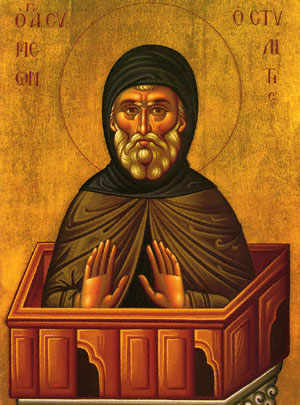 Our righteous Father Symeon was born about the year 390 in a certain village named Sis, in the mountain region of Cilicia and Syria. Having first been a shepherd, he entered the monastic discipline at a young age. After trying various kinds of ascetical practices, both in the monastery and then in the wilderness, he began standing on pillars of progressively greater height, and heroically persevered in this for more than forty years; the greater part of this time he spent standing upright, even when one of his feet became gangrenous, and other parts of his body gave way under the strain. He did not adopt this strange way of life out of vainglory, a charge that some of his contemporaries made against him at the first: because he was already famous for his asceticism and holiness before ascending his first pillar (in Greek, style, whence he is called "Stylite"), many pious people came to him wishing to touch his garments, either for healing or for a blessing; to escape the continual vexation they caused, he made a pillar about ten feet high, and then higher and higher, until the fourth and last was about fifty feet high. The Church historian Theodoret of Cyrrhus, an eyewitness of his exploits who wrote of him while Symeon was yet alive, called him "the great wonder of the world." God gave him the grace to persevere in such an astonishing form of asceticism that multitudes came to see him from Persia, Armenia, South Arabia, Georgia, Thrace, Spain, Italy, Gaul, and the British Isles. Theodoret says that he became so famous in Rome that the Nomadic Arabs by the thousands believed in Christ and were baptized because of him; the King of Persia sent envoys to inquire into his way of life, and the Queen asked to be sent oil that he had blessed. He also was a great defender of sound doctrine, and confirmed the Orthodoxy of the Holy Council of Chalcedon for many who had been beguiled by the teachings of the Monophysites, including the Empress Eudocia, widow of Theodosius the Younger. After a life of unheard-of achievements and struggles, he reposed in peace at the age of sixty-nine, in the year 459.

Apolytikion of Righteous Symeon the Stylite

Thou becamest a pillar of patience and didst emulate the Forefathers, O righteous one: Job in his sufferings, Joseph in temptations, and the life of the bodiless while in the body, O Symeon, our righteous Father, intercede with Christ God that our souls be saved.

Kontakion of Righteous Symeon the Stylite

Thou soughtest the heights, though parted not from things below; thy pillar became a chariot of fire for thee. Thou becamest thereby a true companion of the angelic host; and together with them, O Saint, thou ceaselessly prayest Christ God for us all.

Share the feast of Symeon the Stylite with an icon greeting ecard.