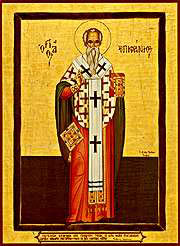 Saint Epiphanius was born about 310 in Besanduc, a village of Palestine, of Jewish parents who were poor and tillers of the soil. In his youth he came to faith in Christ and was baptized with his sister, after which he distributed all he had to the poor and became a monk, being a younger contemporary of Saint Hilarion the Great (see Oct. 21), whom he knew. He also visited the renowned monks of Egypt to learn their ways. Because the fame of his virtue had spread, many in Egypt desired to make him a bishop; when he learned of this, he fled, returning to Palestine. But after a time he learned that the bishops there also intended to consecrate him to a widowed bishopric, and he fled to Cyprus. In Paphos he met Saint Hilarion, who told him to go to Constantia, a city of Cyprus also called Salamis. Epiphanius answered that he preferred to take ship for Gaza, which, despite Saint Hilarion's admonitions, he did. But a contrary wind brought the ship to Constantia where, by the providence of God, Epiphanius fell into the hands of bishops who had come together to elect a successor to the newly-departed Bishop of Constantia, and the venerable Epiphanius was at last constrained to be consecrated, about the year 367. He was fluent in Hebrew, Egyptian, Syriac, Greek, and Latin, and because of this he was called "Five-tongued." He had the gift of working miracles, and was held in such reverence by all, that although he was a known enemy of heresy, he was well nigh the only eminent bishop that the Arians did not dare to drive into exile when the Emperor Valens persecuted the Orthodox about the year 371. Having tended his flock in a manner pleasing to God, and guarded it undefiled from every heresy, he reposed about the year 403, having lived for ninety-three years. Among his sacred writings, the one that is held in special esteem is the Panarion (from the Latin Panarium, that is, "Bread-box,") containing the proofs of the truth of the Faith, and an examination of eighty heresies.

Apolytikion of Epiphanius, Bp. Of Cyprus

Kontakion of Epiphanius, Bp. Of Cyprus

Let us the faithful duly praise the most wondrous and sacred pair of hierarchs, even Germanos together with the godly Epiphanios; for these righteous Saints of God burned the tongues of the godless with the sacred teachings which they most wisely expounded to all those who in Orthodox belief do ever hymn the great myst'ry of piety.

Share the feast of Epiphanios, Bishop of Cyprus with an icon greeting ecard.