Christopher the Martyr of Lycea 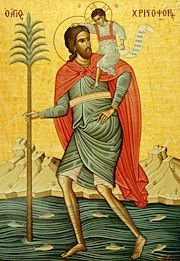 Saint Christopher was at first named Reprobus. Seeing the Christians persecuted, he rebuked the tyrants for their cruelty. Soldiers were sent to bring him to appear before the ruler; but he converted them to Christ, and with them was baptized, receiving the name Christopher. After he appeared before the ruler, he was imprisoned and two harlots were sent to seduce him, but he converted them also, and encouraged them in their martyrdom. He was subjected to torments and finally beheaded in the days of Decius. Many marvellous and mythical things are said about him out of ignorance and superstition, one of which is that it is impossible for one to die suddenly from some unexpected cause on the day on which one looks at the Saint's icon. This is the origin of that proverb that is quoted in various quarters: "If on Christopher thou shouldst gaze, thou shalt safely wend life's ways." The etymology of his name, which means "Christ-bearer," has undoubtedly moved iconographers to depict him carrying the infant Jesus on his shoulders; it is completely erro-neous, however, to depict him, as some uninformed iconographers do, having the head of a dog, because of a statement in his life that he was dog-faced, by which is meant only that his countenance was exceedingly frightful to look upon.

Share the feast of Christopher the Martyr of Lycea with an icon greeting ecard.