Christodoulos the Wonderworker of Patmos 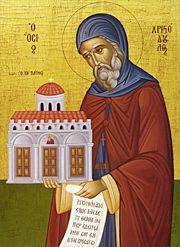 Saint Christodulus, who was from the region of Nicaea of Bithynia, was the son of Theodore and Anna, and was given the name John. He assumed the monastic habit in his youth and was renamed Christodulus ("slave of Christ" in Greek). At first, he lived the ascetical life in various places, then he received permission and monetary aid from the Emperor Alexis I Comnenus (reigned 1081-1118), and built on the island of Patmos a church and monastery named in honour of Saint John the Evangelist. These buildings stand to this day. However, when the Arabs attacked that place, he fled with his disciples and went to Euboia (Euripus), where also he completed the course of his life about the end of the eleventh century on the 16th of March. The disciples of this righteous man took his sacred incorrupt remains and transferred them to his own monastery, where they repose to this day for the sanctification of those who have recourse to them with faith.

The content on this page is under copyright and is used by permission. All rights reserved. These works may not be further reproduced, in print or on other websites or in any other form, without the prior written authorization of the copyright holder:
Icon © St. Isaac of Syria Skete
Reading © Holy Transfiguration Monastery - Brookline, MA

Share the feast of Christodoulos the Wonderworker of Patmos with an icon greeting ecard.