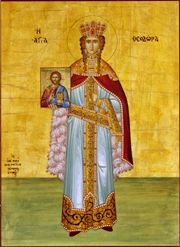 As for the renowned Empress Theodora, she was from Paphlagonia and was the daughter of a certain Marinus, the commander of a military regiment. While being the wife of the Emperor Theophilus, the last of the Iconoclasts, she adorned the royal diadem with her virtue and piety; as long as her husband Theophilus lived, she privately venerated icons, despite his displeasure. After his death, she restored the holy icons to public veneration; this is commemorated on the Sunday of Orthodoxy, the First Sunday of the Great Fast. She governed the Empire wisely for fifteen years, since her son Michael was not yet of age. But in 857 she forsook her royal power and entered a certain convent in Constantinople called Gastria, where she finished the course of her life in holiness and reposed in the Lord. Her sacred incorrupt remains are found in Corfu, in the Church of the Most Holy Theotokos of the Cave, in the capital city of the island (see also Dec. 12).

As a right worthy namesake of gifts bestowed of God, and a divinely-wrought image of holy wisdom and faith, thou didst make the Church to shine with godly piety; for thou didst demonstrate to all that the Saints in every age have shown honor to the icons, O Theodora, thou righteous and fair adornment of the Orthodox.

We sing thy praises as the gem and fairness of the Church, and as a diadem and pattern of all Christian queens, O all-lauded and divinely-crowned Theodora; for in bringing back the icons to their rightful place, thou didst cast usurping heresy out of the Church. Hence, we cry to thee: Rejoice, O Sovereign most ven'rable.

Share the feast of Theodora the Empress with an icon greeting ecard.