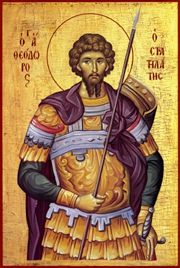 When the Saint had taken the idols home, he broke them in pieces and distributed the gold and silver to the poor by night. The next day a centurion named Maxentius told Licinius that he had seen a pauper pass by carrying the head of Artemis. Saint Theodore, far from repenting of this, confessed Christ boldly. Licinius, in an uncontainable fury, had the Saint put to many torments, then crucified. While upon the cross, the holy Martyr was further tormented -- his privy parts were cut off, he was shot with arrows, his eyes were put out, and he was left on the cross to die. The next day Licinius sent men to take his corpse and cast it into the sea; but they found the Saint alive and perfectly whole. Through this, many believed in Christ. Seeing his own men turning to Christ, and the city in an uproar, Licinius had Theodore beheaded, about the year 320. The Saint's holy relics were returned to his ancestral home on June 8, which is also a feast of the Great Martyr Theodore.

In courage of soul, and furnished with the arms of faith, thou tookest in hand the word of God as though a spear and didst put thy foe to flight, thou great boast of martyrs, O Theodore; now together with them, O Saint, cease not to entreat Christ our God for all of us.

Share the feast of Theodore the Commander & Great Martyr with an icon greeting ecard.