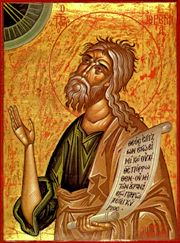 This great Prophet of God, Jeremias, who loved his brethren and lamented for them greatly, who prayed much for the people and the Holy City, was the son of Helkias of the tribe of Levi, from the city of Anathoth in the land of Benjamin. He was sanctified from his mother's womb, as the Lord Himself said concerning him: "Before I formed thee in the belly, I knew thee; and before thou camest forth from the womb, I sanctified thee; I appointed thee a prophet to the nations" (Jer. 1:5). He prophesied for thirty years, from 613 to 583 B.C. During the last captivity of the people in the reign of Sedekias, when only a few were left behind to cultivate the land, this Prophet remained with them by the permission of Nabuzardan, the captain of the guard under Nabuchodonosor. He wept and lamented inconsolably over the desolation of Jerusalem and the enslavement of his people. But even the few that remained behind transgressed again, and fearing the vengeance of the Chaldeans, they fled into Egypt, forcibly taking with them Jeremias and Baruch his disciple and scribe. There he prophesied concerning Egypt and other nations, and he was stoned to death in Taphnas by his own people about the year 583 B.C., since they would not endure to hear the truth of his words and his just rebukes. His book of prophecy is divided into fifty-one chapters, and his book of lamentation into five; he is ranked second among the greater Prophets. His name means "Yah is exalted."

As we celebrate the memory of Thy Prophet Jeremias, O Lord, through him we beseech Thee to save our souls.

Share the feast of Jeremiah the Prophet with an icon greeting ecard.