Herman the Wonderworker of Alaska & First Saint of America 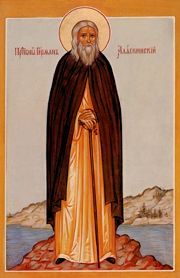 Saint Herman (his name is a variant of Germanus) was born near Moscow in 1756. In his youth he became a monk, first at the Saint Sergius Hermitage near Saint Petersburg on the Gulf of Finland; while he dwelt there, the most holy Mother of God appeared to him, healing him of a grave malady. Afterwards he entered Valaam Monastery on Valiant Island in Lake Ladoga; he often withdrew into the wilderness to pray for days at a time. In 1794, answering a call for missionaries to preach the Gospel to the Aleuts, he came to the New World with the first Orthodox mission to Alaska. He settled on Spruce Island, which he called New Valaam, and here he persevered, even in the face of many grievous afflictions mostly at the hands of his own countrymen in the loving service of God and of his neighbour. Besides his many toils for the sake of the Aleuts, he subdued his flesh with great asceticism, wearing chains, sleeping little, fasting and praying much. He brought many people to Christ by the example of his life, his teaching, and his kindness and sanctity, and was granted the grace of working miracles and of prophetic insight. Since he was not a priest, Angels descended at Theophany to bless the waters in the bay; Saint Herman used this holy water to heal the sick. Because of his unwearying missionary labours, which were crowned by God with the salvation of countless souls, he is called the Enlightener of the Aleuts, and has likewise been renowned as a wonderworker since his repose in 1837.

Apolytikion of Herman of Alaska

Blessed ascetic of the northern wilds and gracious intercessor for the whole world, teacher of the Orthodox Faith, good instructor of piety, adornment of Alaska and joy of all America, holy Father Herman, pray to Christ God that He save our souls.

Kontakion of Herman of Alaska

Monk of Valaam, who through ascetic labours didst become an emulator of the desert-dwelling Saints of old, O beloved of the Mother of God and Virgin, having taken prayer as sword and shield, thou wast revealed as the scourge of pagan darkness and the demons' hosts. Hence we cry to thee: O Saint Herman, pray that we be saved.

Share the feast of Herman the Wonderworker of Alaska & First Saint of America with an icon greeting ecard.