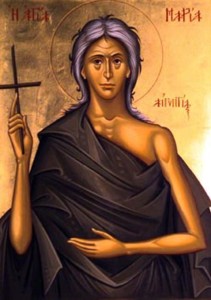 When Mary was only twelve years old, she left her parents and departed to Alexandria, where she lived a depraved life for seventeen years. Then, moved by curiosity, she went with many pilgrims to Jerusalem, that she might see the Exaltation of the venerable Cross. Even in the Holy City she gave herself over to every kind of licentiousness and drew many into the depth of perdition. Desiring to go into the church on the day of the Exaltation of the Cross, time and again she perceived a certain invisible power preventing her entrance, whereas the multitude of people about her entered unhindered. Therefore, wounded in heart by this, she decided to change her way of life and reconcile herself to God by means of repentance. Invoking our Lady the Theotokos as her protectress, she asked her to open the way for her to worship the Cross, and vowed that she would renounce the world. And thus, returning once again to the church, she entered easily. When she had worshipped the precious Wood, she departed that same day from Jerusalem and passed over the Jordan. She went into the inner wilderness and for forty-seven years lived a most harsh manner of life, surpassing human strength; alone, she prayed to God alone. Toward the end of her life, she met a certain hermit named Zosimas, and she related to him her life from the beginning. She requested of him to bring her the immaculate Mysteries that she might partake of them. According to her request, he did this the following year on Holy and Great Thursday. One year after this, Zosimas again went thither and found her dead, laid upon the ground, and letters written in the sand near her which said: "Abba Zosimas, bury here the body of wretched Mary. I died on the very day I partook of the immaculate Mysteries. Pray for me." Her death is reckoned by some to have taken place in 378, by some, in 437, and by others, in 522. She is commemorated also on the Fifth Sunday of Great Lent. Her life was recorded by Saint Sophronius of Jerusalem.

Apolytikion of Mary of Egypt

The image of God, was faithfully preserved in you, O Mother. For you took up the Cross and followed Christ. By Your actions you taught us to look beyond the flesh for it passes, rather to be concerned about the soul which is immortal. Wherefore, O Holy Mary, your soul rejoices with the angels.

Share the feast of Mary of Egypt with an icon greeting ecard.