Isaac the Syrian, Bishop of Ninevah 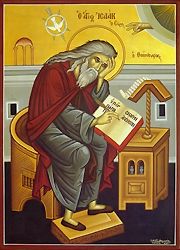 The great luminary of the life of stillness, Saint Isaac, was born in the early seventh century in Eastern Arabia, the present-day Qatar on the Persian Gulf. He became a monk at a young age, and at some time left Arabia to dwell with monks in Persia. He was consecrated Bishop of Nineveh (and is therefore sometimes called "Saint Isaac of Nineveh"), but after five months received permission to return to solitude; he spent many years far south of Nineveh in the mountainous regions of Beit Huzaye, and lastly at the Monastery of Rabban Shabur. He wrote his renowned and God-inspired Ascetical Homilies toward the end of his long life of monastic struggle, about the end of the seventh century. The fame of his Homilies grew quickly, and about one hundred years after their composition they were translated from Syriac into Greek by two monks of the Monastery of Mar Sabbas in Palestine, from which they spread throughout the monasteries of the Roman Empire and became a guide to the hesychasts of all generations thereafter.

Apolytikion of Isaac the Syrian

He that thundered on Sinai with saving laws for man hath also given thy writings as guides in prayer unto monks, O revealer of unfathomable mysteries; for having gone up in the mount of the vision of the Lord, thou wast shown the many mansions. Wherefore, O God-bearing Isaac, entreat the Saviour for all praising thee.

Kontakion of Isaac the Syrian

As an ascetic and God-bearer great in righteousness and an instructor of monastics do we honour thee, thou revealer of things sacred, and our protector. But, O Isaac, since thou hast great boldness with the Lord, intercede with Him for all of us who sing thy praise and who cry to thee: Rejoice, O Father most wise in God.

Share the feast of Isaac the Syrian, Bishop of Ninevah with an icon greeting ecard.