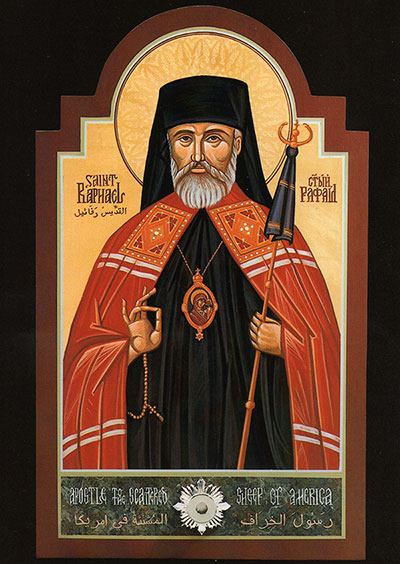 Saint Raphael Hawaweeny was born on November 8th, 1860 A.D., in Damascus, Syria, to pious Christian parents. He studied Arabic grammar and mathematics at the Antiochian Patriarchate parochial school where he was tonsured a reader in 1874. His strong academics served him well throughout his life, providing for him numerous opportunities to succeed and grow. He accepted a position in 1877 as an assistant teacher of Arabic and Turkish, which became full time in 1879. In 1889 he was tonsured a monk while working with Patriarch Hierotheos at the patriarchate, traveling with him on pastoral visits and serving as his personal assistant.

Longing to continue his theological studies, Raphael petitioned the Patriarch for permission to study at Halki Theological School, which was the only option for students of the Antiochian Patriarchate as the Balamand Seminary in Lebanon had been closed since 1840. After much persistence, Raphael received the blessing of the Patriarch and enrolled in Halki Seminary where he was ordained a deacon in 1885. After completing his degree at Halki, the young Deacon Raphael studied at the Kiev Theological Academy, working as a liaison between the Moscow and Antiochian patriarchates. Deacon Raphael was ordained to the holy priesthood in 1889 while in Kiev, continuing to serve that community for many years.

The opening of the Suez Canal in 1869 led to the subsequent collapse of the silk industry in the Middle East, causing many Syrians and others to immigrate to the United States. These new citizens desired to have their religion present in their new homeland and sent letters to their mother churches for pastoral help. A few priests were sent, but none lasted, and so the people asked for Father Raphael Hawaweeny to come to America and serve. Both the Antiochian and Moscow Patriarchs agreed to this idea, and Father Raphael left for America where the people greeted him with great love. Father Raphael then spent many years serving the Syrians in Brooklyn, New York, but he desired to scan the continent for Syrians and other Orthodox Christians who were without spiritual leadership. He traveled by train and carriage across the nation, finding Orthodox Christians, recording their location, and performing liturgies, baptisms, and weddings. Upon his return to Brooklyn, Father Raphael worked to find clergy to send to these dispersed communities, giving them a full time pastor to minister to their needs.

In 1909, by the hands of Bishops Tikhon and Innocent of the Moscow Patriarchate, he was the first bishop consecrated in the New World. The now Bishop Raphael continued his ministry to the Christians throughout America. Bishop Raphael worked tirelessly in Brooklyn to mediate disputes between the Orthodox Christians from Syria and Maronite Catholic Christians who often fought violently with one another. Despite numerous outbursts and setbacks, Bishop Raphael continued his ministry serving the Orthodox throughout his vast diocese. One such incident was when an influential leader of the Maronite group was killed and many people accused Bishop Raphael of ordering his murder. This led to many people attempting to harm the bishop, but he endured it all willingly. He was arrested under attempted murder charges, but was eventually cleared and let go after much time and money was spent in his defense.

Throughout his time in North America, Bishop Raphael founded 36 parishes to bring the Church to the faithful who were without a priest to guide them. Bishop Raphael truly lived out Gospel in all aspects of his life, striving tirelessly for the people in his care, even to the point of sacrificing his own physical health in order to maintain the spiritual health of his people. Bishop Raphael died on February 27th, 1915, at his home in Brooklyn. His funeral was attended by hundreds of people, including clergy from all ethnic backgrounds, illustrating his love for all of the people of God regardless of where they came from. The sacred relics of Saint Raphael, “the good shepherd of the lost sheep in North America,” were first interred in a crypt beneath the holy table at his Saint Nicholas Cathedral in Brooklyn on March 7th, 1915, before being moved to the Syrian section of Mount Olivet Cemetery in Brooklyn on April 2nd, 1922. They were finally translated to the Holy Resurrection Cemetery at the Antiochian Village near Ligonier, Pennsylvania, on August 15th, 1988. His sanctity was officially proclaimed by the Holy Synod of the Orthodox Church in America on March 29th, 2000, and his glorification was celebrated on May 29th of that year at the Monastery of Saint Tikhon in Pennsylvania.

The content on this page is under copyright and is used by permission. All rights reserved. These works may not be further reproduced, in print or on other websites or in any other form, without the prior written authorization of the copyright holder:
Icon © Antiochian Orthodox Christian Archdiocese of North America
Reading © Greek Orthodox Archdiocese of America

Share the feast of Raphael of Brooklyn with an icon greeting ecard.