Translation of the Image of Our Lord and God and Savior, Jesus Christ 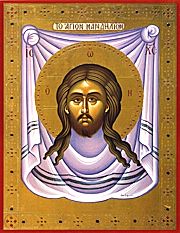 When the fame of our Lord Jesus Christ came to Abgar, the ruler of Edessa, who was suffering from leprosy, Abgar sent a messenger named Ananias, through him asking the Savior to heal him of his disease, while bidding Ananias bring back a depiction of Him. When Ananias came to Jerusalem, and was unable to capture the likeness of our Lord, He, the Knower of hearts, asked for water, and having washed His immaculate and divine face, wiped it dry with a certain cloth, which He gave to Ananias to take to Abgar; the form of the Lord's face had been wondrously printed upon the cloth. As soon as Abgar received the cloth, which is called the Holy Napkin (Mandylion), he reverenced it with joy, and was healed of his leprosy; only his forehead remained afflicted. After the Lord's Death, Resurrection, and Ascension, the Apostle Thaddaeus (see Aug. 21) came to Edessa, and when he had baptized Abgar and all his men, Abgar's remaining leprosy also was healed. Abgar had the holy image of our Savior fixed to a board and placed at the city gate, commanding that all who entered the city reverence it as they passed through. Abgar's grandson, however, returned to the worship of the idols, and the Bishop of Edessa learned of his intention to replace the Holy Napkin with an idol. Since the place where it stood above the city gate was a rounded hollow, he set a burning lamp before the Holy Napkin, put a tile facing it, then bricked up the place and smoothed it over, so that the holy icon made without hands was no longer to be seen, and the ungodly ruler gave no further thought to it.

With the passage of time, the hidden icon was forgotten, until the year 615, when Chosroes II, King of Persia, was assaulting the cities of Asia, and besieged Edessa. The Bishop of Edessa, Eulabius, instructed by a divine revelation, opened the sealed chamber above the city gate and found the Holy Napkin complete and incorrupt, the lamp burning, and the tile bearing upon itself an identical copy of the image that was on the Holy Napkin. The Persians had built a huge fire outside the city wall; when the Bishop approached with the Holy Napkin, a violent wind fell upon the fire, turning it back upon the Persians, who fled in defeat. The Holy Napkin remained in Edessa, even after the Arabs conquered it, until the year 944, when it was brought with honor and triumph to Constantinople in the reign of Romanus I, when Theophylact was Ecumenical Patriarch. The Holy Napkin was enshrined in the Church of the most holy Theotokos called the Pharos. This is the translation that is celebrated today.

We worship Thine immaculate icon, O Good One, asking the forgiveness of our failings, O Christ our God; for of Thine own will wast Thou well-pleased to ascend the Cross in the flesh, that Thou mightest deliver from slavery to the enemy those whom Thou hadst fashioned. Wherefore, we cry to Thee thankfully: Thou didst fill all things with joy, O our Saviour, when Thou camest to save the world.

Share the feast of Translation of the Image of Our Lord and God and Savior, Jesus Christ with an icon greeting ecard.