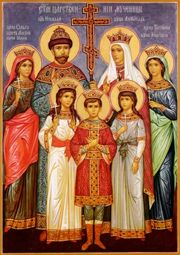 Tsar Nicholas II was the son of Alexander III, who had reposed in the arms of Saint John of Kronstadt. Having been raised in piety, Tsar Nicholas ever sought to rule in a spirit consonant with the precepts of Orthodoxy and the best traditions of his nation. Tsaritsa Alexandra, a grand-daughter of Queen Victoria of England, and a convert from Lutheranism, was noted for her piety and compassion for the poor and suffering. Their five children were beloved of all for their kindness, modesty, and guilelessness.

Amidst the political turmoil of 1917, Tsar Nicholas selflessly abdicated the throne for what he believed was the good of his country. Although he had abdicated willingly, the revolutionaries put him and his family under house arrest, then sent them under guard to Tobolsk and finally Ekaterinburg. A letter written from Tobolsk by Grand Duchess Olga, the eldest of the children, shows their nobility of soul. She writes, "My father asks that I convey to all those who have remained devoted to him ... that they should not take vengeance on his account, because he has forgiven everyone and prays for them all. Nor should they avenge themselves. Rather, they should bear in mind that this evil which is now present in the world will become yet stronger, but that evil will not conquer evil, but only love shall do so."

After enduring sixteen months of imprisonment, deprivation, and humiliation with a Christian patience which moved even their captors, they and those who were with them gained their crowns of martyrdom when they were shot and stabbed to death in the cellar of the Ipatiev house in Ekaterinburg in 1918.

Together with them are also commemorated those who faithfully served them, and were either slain with them, or on their account: General Elias Tatishchev; Prince Basil Dolgorukov; the physician Eugene Dotkin; the lady-in-waiting Countess Anastasia Hendrikova; the serving-maid Anna Demidova; the cook John Kharitonov; and the sailors Clement Nagorny and John Sednev.

Apolytikion of Royal Martyrs of Russia

Most noble and sublime was your life and death, O Sovereigns; wise Nicholas and blest Alexandra, we praise you, acclaiming your piety, meekness, faith, and humility, whereby ye attained to crowns of glory in Christ God, with your five renowned and godly children of blest fame. O Marytrs decked in purple, intercede for us.

Kontakion of Royal Martyrs of Russia

Royalty and martyrdom were joined together, O blest ones, in your death for righteousness and right belief, O wise Sovereigns, Nicholas and Alexandra, with your five children. Hence, Christ God hath deemed you worthy of thrones in Heaven; and with twofold crowns of glory, ye reign for ever, adorned with grace divine.

Share the feast of Holy Royal Martyrs of Russia with an icon greeting ecard.