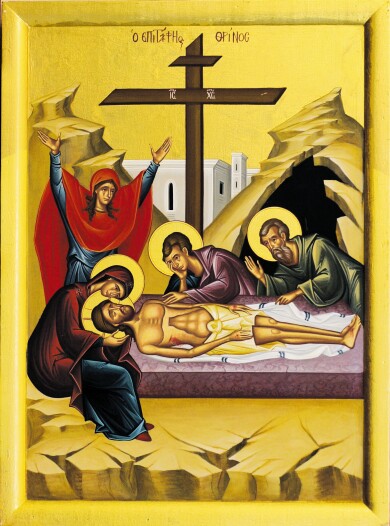 When Friday dawned, Christ was sent bound from Caiaphas to Pontius Pilate, who was then Governor of Judea. Pilate interrogated Him in many ways, and once and again acknowledged that He was innocent, but to please the Jews, he later passed the sentence of death against Him. After scourging the Lord of all as though He were a runaway slave, he surrendered Him to be crucified.

Thus the Lord Jesus was handed over to the soldiers, was stripped of His garments, was clothed in a purple robe, was crowned with a wreath of thorns, had a reed placed in His hand as though it were a sceptre, was bowed before in mockery, was spat upon, and was buffeted in the face and on the head. Then they again clothed Him in His own garments, and bearing the cross, He came to Golgotha, a place of condemnation, and there, about the third hour, He was crucified between two thieves. Although both blasphemed Him at the first, the thief at His right hand repented, and said: "Remember me, O Lord, when Thou comest in Thy Kingdom," to which our Saviour answered, "Today shalt thou be with Me in Paradise." As He hung upon the Cross, He was blasphemed by those who were passing by, was mocked by the high priests, and by the soldiers was given vinegar to drink mixed with gall. About the ninth hour, He cried out with a loud voice, saying, "It is finished." And the Lamb of God "Which taketh away the sin of the world" (John 1:29) expired on the day when the moon was full, and at the hour when, according to the Law, was slain the Passover lamb, which was established as a type of Him in the time of Moses.

Even lifeless creation mourned the death of the Master, and it trembled and was altered out of fear. Yet, even though the Maker of creation was already dead, they pierced Him in His immaculate side, and forthwith came there out Blood and Water. Finally, at about the setting of the sun, Joseph of Arimathea came with Nicodemus (both of them had been secret disciples of Jesus), and they took down the all-holy Body of the Teacher from the Cross and anointed it with aromatic spices, and wrapped it in a clean linen cloth. When they had buried Him in a new tomb, they rolled a great stone over its entrance.

Such are the dread and saving sufferings of our Lord Jesus Christ commemorated today, and in remembrance of them, we have received the Apostolic commandment that a fast be observed every Friday.

Come, let us all praise Him Who was crucified for us. Mary beheld Him on the Tree and said, "Though You endure even the Cross, You are my Son and my God."

Share the feast of Holy Friday with an icon greeting ecard.