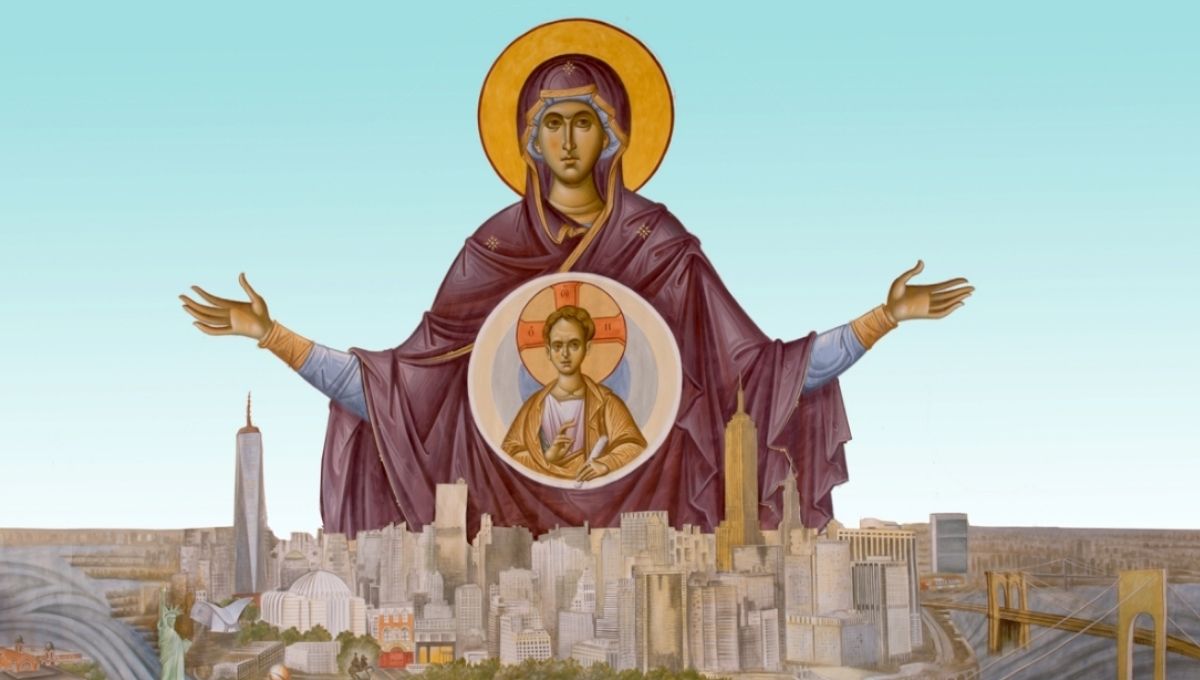 The Virgin of New York City

In the Saint. Nicholas National Shrine

My Beloved Sisters and Brothers in Christ,

In this Newsletter, you will see for the first time a photograph of the completed icon (yet to be installed in the apse of the Church), known as the “Platytera Ton Ouranon” – “She Who is Wider than the Heavens.” The icon is thoroughly described in the article by Bishop Joachim of Amissos, but I want to share with you some thoughts about what this icon means for the Shrine and for New York City.

Because of the momentous and tragic events of September 11th, the Saint Nicholas National Shrine has a special responsibility to the community of New York City. As much a place of remembrance and honor, it is also a place of affirmation. Affirmation that we have celestial protectors and defenders, among whom is the Virgin Theotokos herself.

In the icon, the Virgin with outstretched arms is embracing our City, just as She does the Queen of Cities, Constantinople. We see in the icon familiar landmarks like the Statue of Liberty, the Brooklyn Bridge, and Tower One at the World Trade Center. And we also see the Saint Nicholas National Shrine in the foreground, manifesting that the rebirth of our Church at Ground Zero is a rebirth of our faith in the wake of love and forgiveness.

Forgiveness is a hard thing to associate with 9/11, because of the brutality and barbarity of the attack. But the Virgin’s embrace is the same one which held her Son when His body was taken down from the Cross. It is an embrace of love and hope, and we have seen this hope realized in the rebirth of the World Trade Center. And we are building a beacon of love and forgiveness to be a house of healing at Ground Zero, which needs this presence.

Our Panagia – our Lady of New York City – is a visible sign of this love and forgiveness, for she forgave the crucifiers of her Son, and she will embrace all who come into our National Shrine, with the same message of love and hope that was brought to her by the Archangel on the Day of Her Annunciation.

With Love and Blessings in our Lord Jesus Christ,