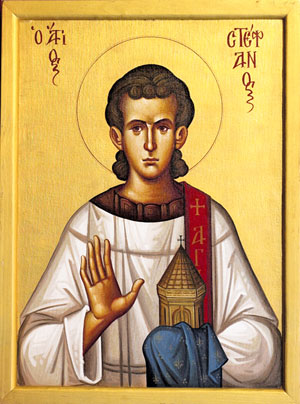 O, First Martyr and Apostle of Christ, you fought the good fight.  You exposed the perversion of the persecutors, for when you were killed by stoning of the hands of the wicked men, you received a crown from the Right Hand on high. -- Troparion of St. Stephen

Saint Stephen is the patron saint of Young Adult Ministry in the Greek Orthodox Archdiocese of America. His total commitment to Jesus Christ shines as an example, guiding the ministry. St. Stephen was one of the first Deacons ordained in the church. At a young age, he actively preached the Gospel of Christ in Jerusalem where he was criticized and persecuted by many Jewish leaders. Stephen was chased outside the walls of Jerusalem and stoned to death. As his persecutors stoned him, he prayed, “Lord do not charge them with this crime,” and he took his last breath. Stephen is an example to be followed, an important witness during an age when many Orthodox Christians died for their faith.  The witness of Stephen and other martyrs is a challenge which all of us are called to meet. He is commemorated each year on December 27th. To learn more about Stephen’s life and ministry, read the Book of Acts, Chapters 6 and 7.

Lord, as we struggle for meaning and purpose in life, Guide us with Your helping hand.  Teach us to be aware of God’s abiding love, and stir our concern for our fellow man.  We commit to You our lives in the spirit of dedication and obedience so that we may be spiritually renewed through the teaching of our Faith and the guidance of the Orthodox Church.

For You are the God that loves mankind and to You we ascribe Glory to the Father, the Son and the Holy Spirit, now and ever and to the ages of ages. Amen.

What this Episode is About: Pascha is the start of a new liturgical year in the Church, with new readings from the Acts of the Apostles and the Gospel according to John. It also shows us what it...
View »

Spanish Language Translations of “Be the Bee” Episodes

Jesus tells us that He came to shed His blood and "give His life as a ransom for many.” But what exactly does that mean? What does the Orthodox Church teach about atonement?
View »

Why Young People Leave: Exploring Common Ministry Mistakes in the Way We Introduce People to the Church

60% of young American Christians fall away from the tradition that raised them. We face the same problem in the Orthodox Church. In this talk, Steve presents three common ministry mistakes. And he...
View »

Be the Bee # 172 | What is Real Christian Faith? (Sunday of Saint John Climacus)

We often think of faith as meaning either "certainty" (confidence that some idea is true) or "religiosity" (participation in a group's activities). But the Fourth Sunday of...
View » 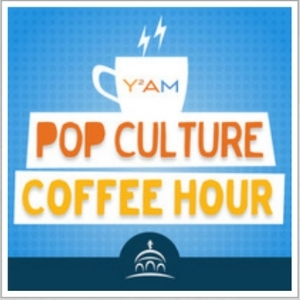 "What is grief, if not love persevering?" Steve and Christian watched the new Disney+ series in the MCU, "WandaVision." The guys discuss grief, justice, power, and the...
View » 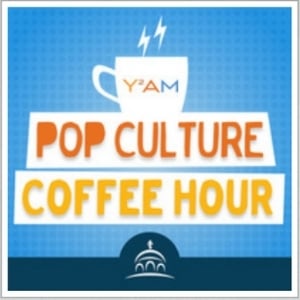 On the latest episode of "Pop Culture Coffee Hour," a podcast from Y2AM - Orthodox Christian Youth and Young Adult Ministries, the girls discuss the Netflix series, Firefly Lane. They...
View »

After weeks of learning about forgiveness and pride and judgment, we begin Great Lent with a Sunday dedicated to icons. Why?

On one level, this is the anniversary of the triumph over...
View » 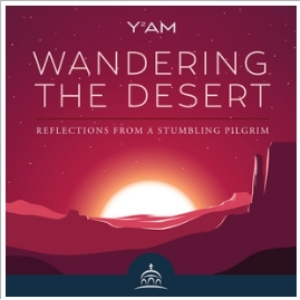 People are lonely, and they often tend to feel adrift in the spiritual life. As such, it’s really easy to get discouraged and feel like no one else is in the trenches with you, struggling with the...
View »

Are you looking for a weekly curriculum for your parish? Check out the Small Group resources and bring people together with this project from the department of Youth and Young Adult Ministries...
View »

Steve Christoforou was on ΕΡΤ Α.Ε. over the weekend (Greek public radio and TV), talking about the ministry work of the Archdiocesan Department of Youth and Young Adult Ministries, especially...
View »

2020 has been a rough year. Why does God allow bad things to happen? Why do bad things happen even to good people? People have struggled with theodicy (the problem of evil and suffering) for...
View »

What does it really mean to be a man or a woman? Society usually gives us two extremes: to accept every gender stereotype (no matter how superficial), or to completely reject the differences...
View »

Putting the "Giving" Back in "Thanksgiving"

As it does every year, Thanksgiving comes and goes quickly. We spend a few hours trying to feel grateful, but then start looking for Black Friday and Cyber Monday deals so we can buy more stuff. If...
View »

Thanksgiving is a time to feel grateful. But that attitude of gratitude can go away as soon as we're done with the turkey. How do we keep it going? Saint Paul tells us to "give thanks in...
View »

Why do we fast from good things like tasty food? A the start of the Nativity Fast, we'll share three basic reasons why fasting helps transform our spiritual lives. But then we'll go a...
View »

Be the Bee #156 | 3 Ways Christians Can Deal with Temptation

Does having bad thoughts make you a bad person? What should Christians do with the temptations we experience? The Church refers to these thoughts as logismoi: the thoughts that tempt us and can...
View »
Page 1 of 17
— 20 Items per Page
Showing 1 - 20 of 340 results.