Troparia Of The Resurrection

When the stone had been sealed by the Jews, While the soldiers were guarding Your most pure body, You arose on the third day, O Savior, Granting life to the world. The powers of heaven therefore cried to You, O Giver of Life: Glory to Your Resurrection, O Christ! Glory to Your Kingdom! Glory to Your saving plan, O Lover of mankind!

When You descended to death, O Life immortal, You destroyed Sheol with the splendor of Your divinity! And when from the depths You raised the dead, All the powers of heaven cried out: O Giver of Life, Christ our God, Glory to You!

Let the heavens rejoice! Let the earth be glad! For the Lord has shown strength with His arm! He has trampled down death by death! He has become the firstborn of the dead! He has delivered us from the depths of Sheol And has granted the world great mercy.

When the women disciples of the Lord Learned from the angel the joyous message of Your Resurrection, They cast away the ancestral curse And elatedly told the apostles: Death is overthrown! Christ God is risen, granting the world great mercy!

Let us, the faithful, praise and worship the Word, Co-eternal with the Father and the Spirit, Born for our salvation from the Virgin; For He willed to be lifted upon the cross in the flesh To endure death and to raise the dead By His glorious Resurrection!

The angelic powers were at your tomb; The guards became as dead men. Mary stood by Your grave, Seeking Your most pure body. You captured Sheol, not being tempted by it. You came to the Virgin, granting Life. O Lord Who arose from the dead, glory to You!

By Your cross, You destroyed death! To the thief You granted Paradise! For the myrrhbearers, you changed weeping into joy! And You commanded Your disciples, O Christ God, To proclaim that You are risen, Granting the world great mercy.

From on high You descended, O merciful One! You accepted the three-day burial To free us from our sufferings! O Lord, our Life and Resurrection, glory to You!

Matins Prokeimena of the Resurrection

Prokeimenon: I will now arise, says the Lord. * "I will set myself for salvation and not draw back from it!"

Prokeimenon: Arise, O Lord my God, in the decree which You have commanded, * and the assembly of all people will surround You!

Prokeimenon: Say among the nations that the Lord is King. * He has established the world so that it shall never be moved.

Verse: Sing the Lord a new song! Sing to the Lord, all the earth!

Prokeimenon: Arise, O Lord, and help us! * Deliver us for your Name's sake!

Verse: We have heard with our ears, O God, and our fathers have told us.

Prokeimenon: Arise, O Lord, my God, and let your hand be lifted up, * for you reign forever!

Verse: I will give thanks to You with my whole heart, O Lord! I will proclaim all Your wonders!

Prokeimenon: O Lord, stir up Your might * and come to save us!

Verse: Give ear, O Shepherd of Israel ; You Who lead Joseph like flock!

Prokeimenon: Arise, O Lord, my God, and let your hand be lifted up! * Do not forget Your poor ones until the end!

Verse: I will give thanks to You with my whole heart, O Lord! I will proclaim all Your wonders!

Kontakia Of The Resurrection

As God, You arose from the tomb in glory, Raising the world with Yourself. Human nature praises You as God, for death has vanished. Adam exults, O Master! Eve rejoices, for she is freed from bondage, and cries to You: You are the Giver of Resurrection to all, O Christ!

Sheol became afraid, O almighty Savior, Seeing the miracle of Your Resurrection from the tomb! The dead arose! Creation, with Adam, beheld this and rejoiced with You, And the world, O my Savior, praises You forever!

On this day You arose from the tomb, O merciful One, Leading us from the gates of death. On this day Adam exults as Eve rejoices. With the prophets and patriarchs, They unceasingly praise the divine majesty of Your power.

My Savior and Redeemer As God rose from the tomb and delivered the earth-born from their chains. He has shattered the gates of Sheol And as Master, He has risen on the third day!

You descended into Sheol, O my Savior, Shattering its gates as Almighty, Resurrecting the dead as Creator, And destroying the sting of death. You have delivered Adam from the curse, O Lover of Man, And we cry to You: O Lord, save us!

When Christ God, the Giver of Life, Raised all of the dead from the valleys of misery with His mighty hand, He bestowed resurrection on the human race. He is the Savior of all, the Resurrection, the Life, and the God of all.

The dominion of death can no longer hold men captive, For Christ descended, shattering and destroying its powers. Sheol is bound, while the prophets rejoice and cry: The Savior has come to those in faith. Enter, you faithful, into the resurrection!

By rising from the tomb, You raised the dead and resurrected Adam. Eve exults in Your Resurrection, And the world celebrates Your rising from the dead, O Greatly Merciful One!

O Lord and Master of my life! Take from me the spirit of sloth, faint-heartedness, lust of power, and idle talk. But give rather the spirit of chastity, humility, patience, and love to Thy servant. Yea, Lord and King! Grant me to see my own errors and not to judge my brother, for Thou art blessed unto ages of ages. Amen.

Canon: A series of odes. The matins prayers included in this book use the nine Scriptural odes. Other canons use poetry, often based on themes occurring in the Scriptural odes, at other times based on other themes.

Chant: A mellifluous reading, something between speaking and singing. Compline: Night prayer, generally assumed to occur after supper.

Doxology: From the Greek for 'words of glory.' The Great Doxology is sung on Sundays and important feast days; the Lesser Doxology, page 86, is said "not sung" on ordinary days. Other doxologies, such as 'Glory to the Father and to the Son and to the Holy Spirit... ,' occur frequently as well.

Fathers: (as in 'Through the prayers of our holy fathers . . . .") Refers to those men and women who precede us in the Faith, who inspire us to continue, and who pray for our well-being.

Festal Menaion: The book giving the hymnography for major feasts of the Church. For an English-language version, see the Bibliography.

Kathisma (plural kathismata): One of the twenty sections into which the Psalter is divided. Kontakion (plural kontakia): Originallya long poem written to be sung in church. Now generally a short sung stanza.

Lent: A period of preparation for Pascha. For more information see The Lenten Triodion and Great Lent in the Bibliography.

Lenten Triodion: The book giving the hymnography for the Lenten period. See the Bibliography.

Lectionary: A listing of the Scripture readings used at Liturgy during the Church year.

Octoechos: A book containing the variable portions for the daily offices throughout the week, based on an eight-week cycle of tones.

Ode: Prayers or poetic compositions found in the Bible (other than Psalms) or subdivisions of the canon (see above).

Office: A rite or service of prayers, hymns and Scripture readings.

Pascha: From the Hebrew for Passover; Easter. Paschaltide: The period between Pascha and Pentecost.

Pentecost: The Sunday, fifty days after Pascha, on which the Holy Spirit descended upon the Apostles. See Acts 2:1-41.

Pentecostarion: A book containing the hymnography for the period from Pascha to Pentecost.

Reader: Strictly speaking, 'Reader' is an office of minor clergy in the Orthodox Church. When I use the term 'reader' in the text of this book, though, I mean it only as a shorthand for "one who prays."

Septuagint: A translation of the Old Testament into Greek, completed in the third century before Christ (sometimes abbreviated 'LXX' 'seventy' because seventy-two scholars participated in the translation). Greek was the universal language at the time. Most New Testament quotes from 'Scripture' are from the Septuagint. Today, the Orthodox Church still accepts the validity of this version, but because there is not a widely accepted English translation available, we use the best we can find generally considered among Orthodox scholars to be the Revised Standard Version or the King James Version. (I used the New King James for this book because it has modern language and the flow of its language works well for chant.) See the Bibliography for a translation of the Septuagint that is available in English.

Tone: A melody. There are various sets of eight tones sung in a weekly cycle throughout the year.

Trisagion: Greek, 'thrice holy.' Basic prayers to the Holy Trinity. Troparion (plural troparia): A stanza of song that summarizes the liturgical theme of the day.

This text is available in print in a book named "Daily Prayer for Orthodox Christians" published by St. Ignatius of Antioch Press

The Fruits of True Prayer 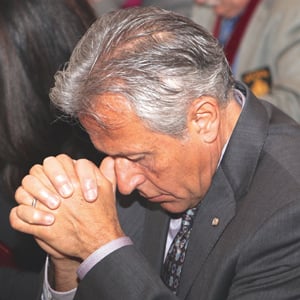