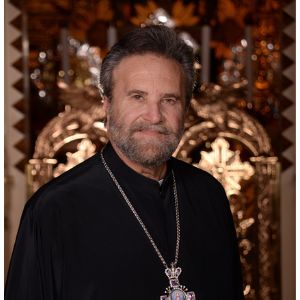 Los Angeles, CA - It is with great respect and affection that we announce the retirement of Very Rev. Fr. John Bakas from the historic St. Sophia Cathedral. Fr. Bakas has served the community of St. Sophia for 27 years and uplifted civic life in Los Angeles’ toughest neighborhoods and beyond. From working with some of Los Angeles’ and Hollywood’s biggest luminaries, to gaining the trust and cooperation of gang members, Fr. Bakas’ dedication to reaching the hearts and minds of Angelenos—and Californians, in general—has made him a beloved and sought-after spiritual leader to Greek Orthodox Christians and those outside the faith.

For well over three decades Fr. Bakas has played a crucial role in the growth and development of the Cathedral, the surrounding neighborhood, and multiple projects and ministries. In addition to serving as Dean of St. Sophia Cathedral since 1995, Fr. Bakas has also been active in various charitable and community service initiatives. His charismatic personality combined with his dedication to bridging faith and civic life led him to work closely with all L.A. mayors, LAPD, City Councilmembers, academics and a variety of civic and state leaders. His service has extended well beyond the walls of the Cathedral and the city of Los Angeles.

Prior to his assignment at the Cathedral, Fr. Bakas served as Chaplain and President of the Valley Children's Hospital Foundation in Fresno, California where he led the fundraising drive to build a new 170 million-dollar facility, now in operation as the nation's state of the art, premier children's hospital.

Bakas led the effort to transform the Cathedral’s surrounding area, helping to establish the Byzantine Latino Quarter. His fluency in Spanish, and commitment to transforming this once-dangerous neighborhood, led him to partner with St. Thomas Aquinas Catholic Church next door, and the gangs that terrorized the area. He forged a new effort to include former gang members in an uplifting of the community—successfully engaging them in cleaning up the neighborhood. Today the neighborhood is graffiti-free and showcases a mural of angels with one of his favorite quotes: “We are each of angels with one wing.  We can only fly embracing each other.”

Antonio R. Villaraigosa, Former Mayor of Los Angeles shared, "Father Bakas has, for more than 20 years, been one of my spiritual leaders. A man who like the good shepherd believes in the God of love not damnation and who has worked to unite the congregation of St Sophia with the surrounding community.  Father Bakas will be missed by all".

Closer to home, Fr. Bakas led St. Sophia’s effort to build a new community center, engaging parish members former California Congressman Michael Huffington, actors Tom Hanks and Rita Wilson, studio chief Jim Gianopoulos, and community members Ted and Maria Maniatakos to build the Huffington Center in 2012.  The Center, on the grounds of St. Sophia, not only provides a large state-of-the-art facility for the St. Sophia community, but also a conference space for civic and community groups, as well as a filming location for local productions.

Asked what gives him joy, he replies to find a purpose in his life. "My purpose was to do exactly what I’ve been doing here for the last 27 years,” he says. “To keep Saint Sophia alive, to define our spiritual talents and to help us stay connected to God.”

“He is leaving St. Sophia Cathedral financially and spiritually stronger than it has ever been before. We are blessed to have had him as our Dean and leader for these past 27 years,” declares former Congressman Michael Huffington.

Born in Kalamata, Greece he emigrated to the United States in 1959 to Albuquerque where he completed his education and went on to become a police officer.  Because of his fluency in Spanish, Bakas was assigned and worked in a Latino area riddled with crime.  During a routine patrol he arrived at the scene of a shooting and was overwhelmed to see the victim was a friend with whom he had served as an altar boy years earlier. “He had a bullet hole in his chest,” recounts Father Bakas. “Through tears I performed mouth to mouth resuscitation, and he regained consciousness and said ‘Yianni, you’re a cop. I thought you were going to become a priest. Do it, do it,” then he died. This tormented me for weeks. I was eventually presented with an opportunity to become a priest.”

Fr. Bakas was ordained by His Eminence Archbishop Iakovos (of blessed memory) to the diaconate on March 7, 1976, and to the Holy Priesthood on January 21,1979.  Over the course of his tenure, he has served as a spiritual leader and mentor to countless individuals.  The dedicated Greek Orthodox Christian Priest and his wife, Presvytera Maria, have four adult children and five grandchildren. He is a passionate Civil War buff, participating in re-enactments as Gen. Ulysses S. Grant.

A GALA celebration in honor of Fr. Bakas’ retirement will be held at St. Sophia Cathedral on Saturday, January 14, 2023.  Fr. Bakas’ last official Liturgy takes place on Sunday, January 22, 2023, after which the community is invited to attend and express their appreciation for Fr. Bakas' many years of service at a luncheon in the Cathedral’s Huffington Center.  For more information, please contact the Cathedral at 323-737-2424.

1.     Founder of the Rotary House Children’s Hospice in Fresno, Ca.

7.     Founder of the Rotary Greek Amphitheater in Fresno, a 2,500-seat outdoor theater built as a mini Epidauros theater famous in ancient Greece.

8.     Co-Chairman of the Police-Clergy Forum of the Los Angeles Police Department

9.     Serves as Commissioner of the Los Angeles Commission on Children, Youth and Families

10.  Father Bakas has served as consultant on the Orthodox perspective for director Steven Spielberg’s animated musical drama, Prince of Egypt and Mel Gibson’s film, The Passion of the Christ.

11.  Fr. Bakas has appeared as an on-air commentator for the A&E production of “Christianity, The First Thousand Years” and “Banned from the Bible.”

12.  He was featured on the PBS program “Visiting…with Huell Howser”. The video tour has become a favorite on area Public Television and generated daily tours to the Cathedral.

13.  He belongs to the California Civil War Re-Enactors Society where he takes on the role (in full uniform) of General Ulysses S. Grant.

14.  He was a tenor for the Albuquerque Light Opera.

4.     Has taught at the University of New Mexico and at Cal State University Stanislaus,

5.     Served as Chaplain and President of The Valley Children’s Hospital Foundation in Fresno, Ca.

6.     Has served the following parishes: